A Cayman National Bank (CNB) employee was killed Friday after returning home to Honduras to celebrate her birthday with her elderly mother.

The victims were identified as Mirna Elizabeth Adriano, 76, a retired school teacher and her daughter Ana Bessy Adriano, 49, who was a systems engineer at CNB. Honduras news has reported that they were shot early Friday morning inside their home in Colonia Universidad in San Pedro Sula, north of Honduras. Ana had visited her mom from the week before to spend some time with her for her birthday. On Thursday the two celebrated her birthday and had gone out that evening.

The motive appears to have been the theft of a safe in the home. According to preliminary information, heavily armed strangers entered the house to remove a safe that was in one of the bedrooms. Some reports indicate that the police believe that the persons maybe known to the victims as there was no apparent forced entry.

Members of National Police indicated that the safe is no longer in place and that the main door of the house was not forced by the criminals. The safe was later found empty in the colony of Las Acacias of the city. They are seeking to review CCTV footage to assist them in their investigation.

Reports are that the mother was asleep in her bedroom on the 2nd floor of the residence and was killed in her bed. Ana was found in the living room. According to locals, they did not hear any suspicious noise so police investigations are directed towards the trustworthy personnel of the victims. Both victims were shot three times each. 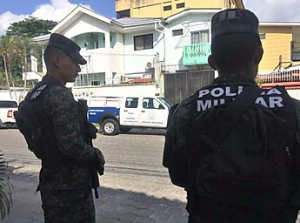 Pic: National Police at the scene of the double homicide.

Adriano was very beloved and had worked at CNB for 7 years. She had left the company to work elsewhere but then returned again in 2015. Her husband informed the bank on Friday of the tragic events. Her colleagues have stated that she was very jovial and always willing to assist others. One person noted “she was a really hard worker.”

CMR sources reveal that CNB president, Mr. Ormond Williams, met with individual bank departments yesterday to inform the various employees of the tragic loss. We understand grief counselling is available should anyone need it.

San Pedro Sula is considered the most dangerous city in the world. Last year, an average of 20 people were murdered every day in Honduras, a country of just 8 million inhabitants, according to the Violence Observatory at the National Autonomous University of Honduras (NAUH). That's a murder rate of 85.5 per 100,000 residents, compared with 56 in Venezuela, 4.78 in the US and 1.2 in the UK.

In San Pedro Sula, the rate is 173, reportedly the highest in the world outside a war zone. 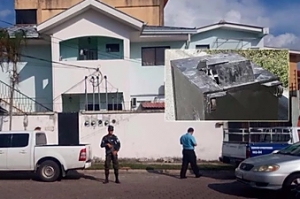 Pic: The house where the 2 victims resided with a photo of the recovered empty safe