A social media post warning that Cayman could have issues with telecommunications traffic when Irma hits Miami is partially correct.

In an effort to obtain reliable information CMR reached out to the local OfReg office and spoke to Deputy CEO & Executive Director ICT, Alee Fa'amoe. He explained that the post is partially correct but there are no satellite links for voice/internet connectivity. The only Intelsat Earth Station in the Cayman Islands was decommissioned by C&W years ago. 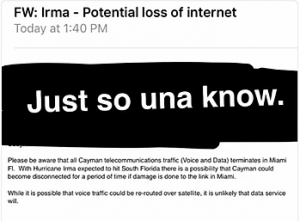 He further noted that it's entirely possible that there could be some issues with a storm of this magnitude. He provided a useful backdrop of information. Regardless of the local service provider, the connections we have to the outside world are via one of two subsea fiber optic cables. One goes to Florida and the other to Jamaica. Regardless of the cable system used, most of the voice and data traffic to and from the Cayman Islands eventually passes through a massive data center in Miami.

Aware of this vulnerability, OfReg requested a tour of the facility earlier this year to satisfy themselves that the data center is built to an adequate standard. OfReg visited the Network Access Point (NAP) on 23 May 2017. The formidable building occupies an entire city block in downtown Miami. It has an entire fleet of standby generators, multiple fiber optic cable connections, and dedicated technical and security staff on 24-hour shifts.

It is a five-story bunker of a building with no windows built to withstand a Cat 5 hurricane. However, despite all its technical features, it remains a single point of failure for the Cayman Islands telecommunications systems.

Fa'amoe commented, “we have indicated to potential submarine cable system investors that we would prefer they NOT go ashore in Miami / Hollywood and that they use a different NAP other than the one in Miami. Storm events like Hurricane Irma are exactly what we have been worried about.

Please note that, while Cayman has a vulnerability in that almost all of its telecommunications traffic traverses a single building in Miami, just about every single country in the Caribbean has the same issue; they all connect to that same building! As does most of Latin America.”

He describes the situation as an Achilles' heel for most countries in the western hemisphere and something that will not be easy to fix.

There has been no word from FLOW or C3 as of this publication. C3 have not updated their Facebook post since September 5 and FLOW has no mention of the storm on their social media page either. 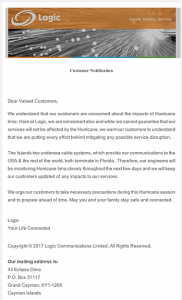 Jose is CAT 4, Irma heads to FLA and Katina goes to Mexico