(CMR) Ahead of the 2021 General Election, the Elections Office reminds individuals intending to run that they must first seek formal nomination in order to be considered a candidate.

Individuals must submit a completed set of nomination forms to their electoral district’s Returning Officer on Nomination Day, Monday, March 1, 2021, between 8 am and 3 pm, the Elections Office stated in a release on Wednesday.

“Preparations for the next General Elections are progressing well at the Elections Office. Nomination Day is an important next step in the process to delivering Cayman’s free and fair elections. By way of this release, we are aiming to share the most relevant information with persons seeking to be nominated prior to Nomination Day,” said the Supervisor of Elections, Wesley Howell.

The Elections Office reminds all individuals seeking nomination  of the following:

The Elections Office is not permitted to provide anyone with legal advice. Individuals with questions about nomination qualifications or other legal interpretations are encouraged to seek their own legal advice.

Individuals intending to run in the General Election must be nominated by at least two people who are registered electors of the electoral district they are running for at the time of signing the nomination paper.

The Election Office reminds that it is an offense to knowingly nominate a person who is not qualified pursuant to section 61 of Schedule 2 to the Cayman Islands Constitution Order, 2009 or is disqualified under section 62 of the said Schedule to be elected as a member of the Cayman Islands Parliament.

Additionally, it is also an offense for a nominator who, at the date of signing the nomination paper, is not a registered elector of that electoral district or knows that the person nominated is not qualified to be elected. Those who commit this offense are liable on conviction to a fine of KYD$2,000.

Nomination forms must be accompanied by a deposit of KYD 1,000 payable in cash or a bank draft payable to the Cayman Islands Government.

If a candidate is not elected and received less than 10% of the total votes polled, the money deposited is forfeited to the Crown. Otherwise, the deposit will be refunded to the person who paid the deposit after the election results are declared.

Candidates must supply a high-resolution 2” x 2” passport size color photo on Nomination Day. The photo will be included on the ballot papers.

Candidates should also print their name legibly, as what is written on the nomination form is how it will appear on the ballot paper.

Candidates must indicate to the Returning Officer if they belong to a registered party. The party logo or, for independent candidates, “IND” will be placed beside each candidate’s photo on the ballot paper. 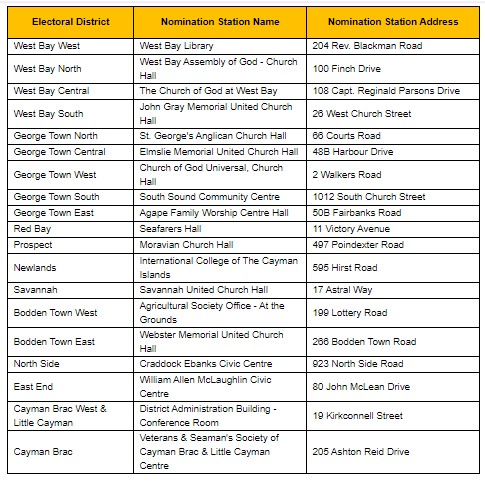 BREAKING: Raccoon on the loose in West Bay

Man wanted in murder of Haiti’s President arrested in Jamaica