“The success of the stringent approach is partly built on public fear. This is not ideal,” Jin said. “The correct way is to tell the public the truth (about the need to coexist with the virus), which is the only sustainable way going forward.”

Jin Dongyan, a virologist at the University of Hong Kong speaking on The zero-Covid strategy

(CMR) The recent pause to Phase 3 of the border re-opening has caused several restaurants to announce this weekend that they will be closing their doors whilst other businesses have indicated concrete losses of millions of dollars leading into the first quarter of next year.

Multiple businesses have reached out to CMR to share their dismay at the loss of sales and jobs for the local economy – which they say is not sustainable. They shared that they are losing hundreds of millions of dollars with real-world implications as the local economy can no longer float these businesses already operating at substantial losses.

Among them are the Wharf Grand Cayman and Rum Point Club – which have both now admitted temporary defeat in the face of the ongoing uncertainty. However, the negative economic impact extends to travel agencies, rentals, on-island property sales and many fear the financial services sector will be next.

The Wharf announced on Saturday morning on their Facebook page that they would not be able to “resume normal operations at this time” and would only be open for pre-booked events and private parties. They noted that it was directly due to the change of plans on the border reopenings. They further shared that they think the government sees their industry as “dispensable”.

“It is incredibly heartbreaking to know that there is not a hint of a plan to be able to cope with a virus that its here to stay forever, our industry is completely overlooked and made as a casualty, our hope were strongly in this reopening, we made adjustment to our facilities, we invested in all sort of preventative measure, equipment and material so that we would be ready to operate in this new world, we invested the little money that we had left in hope of this reopening, so that we could slowly lift our head again and now all this is gone again, together with our little finance left.”

Inside sources shared with CMR that a contingency of the business community met on Friday morning and discussed the perilous times ahead. In the meeting, it was divulged that a Caymanian-owned property in East End has lost some KYD $8 million in reservations canceled for November and December alone. Additionally, those at the meeting heard that Cayman Luxury Villas has lost some $2 million in deposits for January and February alone.

“People think when we re-open the tourism market will immediately bounce back. The reality is we are lucky if we get 150,000 tourists here over the next year. Remember now that the cruise industry will not be coming back anytime soon. People have found other places to go and some have decided not to travel at all. We would be lucky to have a fraction of what we had before but we cannot continue to survive without even that minimal injection.”

The Grand Ole House and The Wharf have also lost some 2,000 bookings for restaurant reservations for January and February next year. A local private airline company has also lost 22 of 38 planned flights so far.

Rum Point Club has also shared that they can no longer remain open under the current circumstances and “due to the continuing bleak outlook for the hospitality industry in the Cayman Islands” they will be closed for an extended period of time after Sunday, October 3. They noted that: 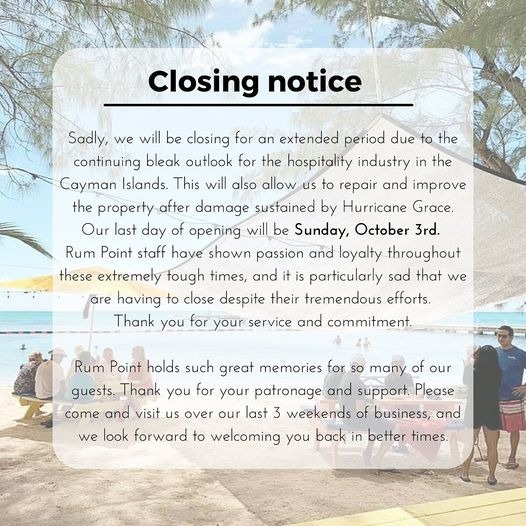 Restaurants and resorts are not the only ones being impacted. It was shared that property sales are not taking a direct hit with many choosing to stay put or visit nearby islands like Jamaica that have less restrictive options in place. Davenport Development has lost three sales from the North American market recently. Those clients were buying second homes in the Cayman Islands. The knock-on effect will be that future construction projects will now seriously be re-evaluated.

One business owner noted that he knows that the Cayman Islands Government is ill-prepared and by that he's referring to the civil servants' nothing that:

The travel agents have notified clients that American Airlines have delayed their scheduled service to Cayman: 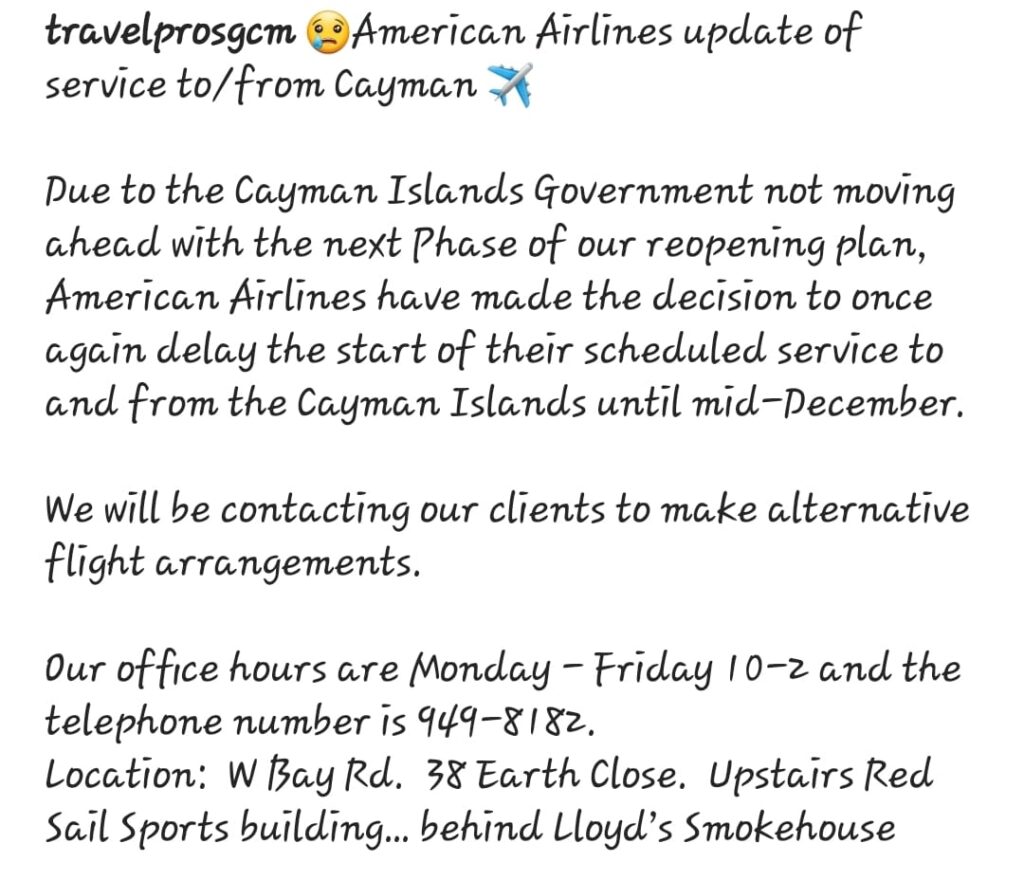 More businesses are spected to take a similar position in the coming weeks.

No, thanks.
How do you feel after reading this?
Tags: Cayman EconomyCOVID-19 measures

Man crashes into house after friends warn him not to drive