(CMR) Less than a year after a convicted drug lord testified that he had met with the Honduran president’s brother to discuss the repayment of debt related to a money-laundering operation, Juan Antonio “Tony” Hernandez was detained by federal agents in Miami on drug and weapons charges.

Hernandez, the brother of President Juan Orlando Hernandez, was detained Friday for “conspiring to import cocaine into the United States, and related weapons charges,” said James Margolin, the chief public information office for the U.S. attorney’s office for the Southern District of New York, in a statement to the Miami Herald.

Margolin said Hernandez was expected to appear in federal court in Miami on Monday.

The office of the Honduran president issued a statement Friday evening confirming Hernandez had been detained. The statement reiterated previous remarks from President Hernandez that the accused deserve the presumption of innocence, but that no man is above the law. 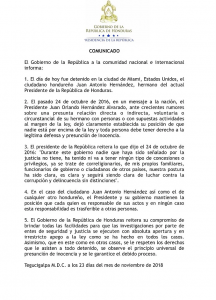 Devis Leonel Rivera Maradiaga, the ex-leader of the Honduran cartel Los Cachiros, testified in March during a pre-sentencing hearing for the now-convicted son of former Honduran president Porfirio Lobo Sosa that he met with Juan Antonio Hernandez to urge the government to pay a supposed debt to a company the traffickers used to launder dirty money.

The Honduran news site La Prensa reports that Hernandez “was going to get government finances to pay Inrimar,” a cartel-operated company that sought government contracts with Honduras.

Fabio Lobo, the former president’s son, pleaded guilty to cocaine smuggling, and Rivera has said he bribed both Lobos. Hernandez has denied any involvement in illegal activities.

Rivera’s cooperation with the federal government has brought criminal charges against Fabio Lobo, along with seven police officers from Honduras’ national force and several members of a powerful Honduran banking family, the New York Times reports.

One prosecutor said the evidence points to “state-sponsored drug trafficking,” the Times reports. Investigators have also reportedly looked into allegations that drug money may have financed the political rise of Honduran President Juan Orlando Hernandez, though Hernandez denies that.

Appearing publicly Friday, the president called the detention of his brother a “sad” situation but said he hoped the legal system would give his brother the ability to defend himself, and that he would be afforded the presumption of innocence.

President Hernandez, who told the public he advised his brother to visit the U.S. in 2016, said that was an opportunity for his brother to “speak his truth” about the rumor. He has denied any involvement.

“In this instance, it’s another opportunity to have justice — in one way or another — but I repeat nobody is above the law,” Hernandez said. “That has been my stance, and you all recognize it.”