Bridgerton breaks records and likely to run for 8 seasons

Netflix's Bridgerton has been a hit with some 63 views!

(CMR) The Netflix series Bridgerton is likely to be running for eight seasons after breaking all records recently after it premiered on December 25, 2020.  This is despite the fact that Netflix has not officially announced the show has been renewed.

Bridgerton is an American television period drama created by Chris Van Dusen and produced by Shonda Rhimes based on novels written by Julia Quinn. The plotline is set against the backdrop of Regency-era England and centered around the Bridgerton family. Rimes adds a modern-day spin to the show that includes modern race and gender attitudes. This is her first project under the new Shonda Rhimes' Production Company label. 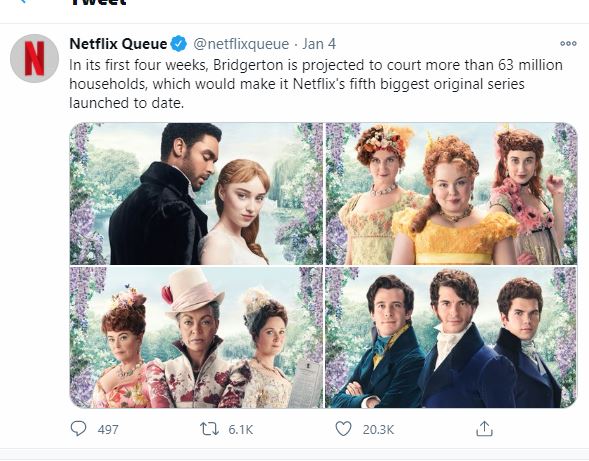 The series opens in 1913 Lindon as high-society families work to pair off their young eligible children. Lady Violet Bridgerton has eight children including Daphne which is the focal point of Season 1.

It was revealed earlier this month that the period drama had been streamed by 63 million households since it arrived on Netflix on Christmas Day. This would make it the streaming giant's fifth-biggest original series launched to date. ProductionWeekly reported that the screw is expected to shoot new episodes for Season 2 in March 2021 in Uxbridge, England.

No, thanks.
How do you feel after reading this?
Tags: BridgertonNetflix

(CMR) After more than 20 years, the Cayman Islands Air Show returns as part of the Queen’s Platinum Jubilee celebration...

(CMR) Five dancers from Dreamchasers Cayman have been accepted to participate in the Harlem School of the Arts Dance, New...

Will Smith banned from Oscars for 10 years

(CMR) Will Smith will not be allowed to attend the Academy Awards for the next 10 years following his slap...