(CMR) A female driver has reportedly collided with a light pole on the junction of Party Lane and Marina Drive in Prospect.

Early reports are that she may have fallen asleep at the wheel and was initially stuck behind the steering wheel. Eyewitnesses shared with CMR that she could be heard screaming. 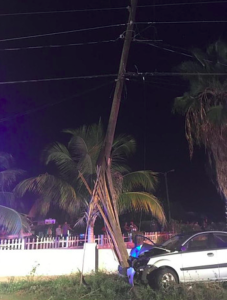 She has just been removed by fire rescue and taken by ambulance to the hospital.

The incident has caused a power outage in the surrounding areas.

CUC has stated power will not be full restored until 1:00 am. Spotts and Newlands have also lost power about an hour after this posting.

This is a developing story and once more information is available will be updated accordingly.

Just before 10:15PM yesterday, 18 November, police and other emergency services were dispatched by the 9-1-1 Communication Centre to a report of a motor vehicle collision involving one car and a light pole.

When they arrived the police observed a blue Kia Rio that sustained extensive damage to the front of the vehicle and a light pole that was broken in the middle. A single female occupant was inside the vehicle and she informed the attending officer who was first at the location that she was trapped and could not exit the vehicle.

The Cayman Islands Fire Service  was notified and they attended the location and proceeded to remove the occupant from the vehicle. She was then transported by the Emergency Medical Services to the Cayman Islands Hospital to receive treatment for what is now believed to be non-life-threatening-injuries at this time. She remains in the hospital under observation at this time.

Cayman Utilities Company was also contacted and informed of the incident as it caused a power outage in the area. They responded immediately and began working on the problem.

This incident is currently under investigation.