(CMR) BREAKING: For the first time in the history of the Cayman Islands an early election has been called for April 14 at the request of PPM Leader and Premier Alden McLaughlin. McLaughlin refused to call a sitting of Parliament in order to consider a vote of no confidence against House Speaker McKeeva Bush and instead has opted to call an early election.

The response appears to be as a result of the Opposition demanding a sitting of Parliament and claiming that McLaughlin breached the constitution by not doing so. Ironically it was being rumored months ago that members of the Unity government were planning a coup over the same-sex marriage debate, but that never came to fruition.

Parliament is being dissolved this Sunday, February 14, and early March persons intended to run for political office must officially be nominated and pay their $1,000.

The governor has issued the following statement:

At the request of, and in consultation with the Premier, I will be issuing a proclamation on Sunday 14 February 2021 dissolving the Parliament, in accordance with Section 84(2) of the Cayman Islands Constitution.

I will, by proclamation, set Wednesday 14 April 2021 as the date for the next General Election, replacing the May General Election date, as the Constitution sets out a  maximum of two months between the dissolution of the Parliament and a General Election. This date ensures that no newly registered, eligible voters are disenfranchised.

Returning Officers will be issued Writs setting Nominations day as Monday 1 March 2021. This date, just over two weeks from the dissolution of the Parliament allows time for potential candidates to prepare. 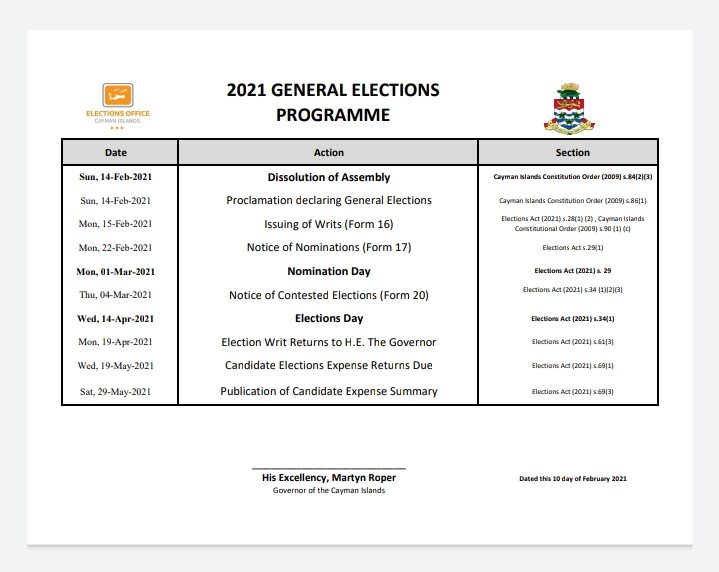 I have been assured by the Supervisor of Elections that the Elections Office will be able to deliver a smooth, fair, and transparent General Election on this new date.

Cayman Islands General Elections have historically had excellent voter turnout, and I encourage all voters to exercise their democratic right and vote in the 14 April 2021General Election.”

BREAKING: Barbershop robbed by three armed men
Covid patient dropped down with "highly symptomatic" infection as others now forced into quarantine
COVID patient admitted to ICU at end of 14 day quarantine
Father charged in 2019 shooting of his own son