(CMR) Three boaters ran into rough seas after 8:00 pm last night and are now criticizing emergency response teams for not providing them with any meaningful assistance after the distress call was placed to 911.

Jerrin Carter, one of the boaters, shared his story exclusively with Cayman Marl Road. He indicated that they were fighting 6-foot waves after deciding to take an evening fishing trip from the South Sound channel.

After a few hours, they realized that there was a noticeable change in the waves and decided to come in immediately. However, they encountered engine failure right outside of the reefs. They decided at that stage to call 911 for assistance around 8:45 pm. However, the response that they received from 911 was unacceptable. He stated that:

Basically we were told to contact someone else for assistance who owned a boat as they had no one to assist us at that time. We were very disappointed in their lack of response and care.

We were essentially told no marine units were available.

The boaters contacted others on land including the mother of two of them, SherryAnn Smith, who proceeded to try to find any boaters in Prospect that could render some assistance. She also contacted 911 at around 9:00 pm. She explained that they told her:

Another boating friend, Peter Jervis, contacted the Marine Unit and was told that no one was available and they were off duty for the evening.

Eventually, she found a local water sports operator, Richard Gonzales, who rendered immediate assistance with his jet ski. He was able to pull them safely to shore after hooking the boat to the jet ski.

He then contacted them again 45 minutes later after injuring himself whilst attempting to anchor down and secure the boat so that it didn't go over the reef. He explained that while focusing on trying to prevent the boat from drifting he injured his foot with a hook.

Jason Carter, Jerrin's brother and one of the other boaters shared his disappointment with the entire ordeal:

“I feel when it comes to our marine rescue incidents it needs to be taken more seriously and that I was highly disappointed to see that not even one police car or ambulance was on sight upon our arrival to shore after the distress call was made I felt as if my governments marine rescue team failed us which was extremely hurtful it was a horrifying situation to begin with but what made the feeling worst was the lack of support from our protectors ! I would also like to publicly thank our good friend Honey G. Who also risked his own life to come out and rescue us on a jet ski. If that concerned and brave local / friend of my family did not assist I don't know quite how bad the night could have ended or if I would even be able to comment now”

Carter was treated at the hospital and released for the night.

None of the parties have been contacted by the authorities following their ordeal. However, they were distressed and have publicly called for a better response from the Marine Unit which recently claimed to have acquired various marine equipment for rescues. Several calls were placed to the morning talk show – Cayman CrossTalk on Rooster 101.9 FM. Smith and Carter expressed their dismay and amazement at the fact that no emergency assistance was available for a life-threatening situation.

Ms. Smith shared with us: 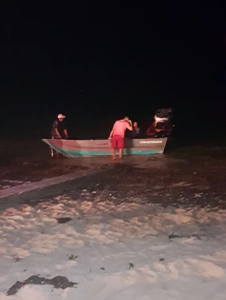 “We understand that the Marine Unit was recently placed under the Fire Department and recently received training and new equipment. I understand that they are short of staff and are not fully equipped to undertake rescues as they should be. Imagine me as a parent feeling that both of my boys could have been lost at sea – my only children. I didn't sleep last night and am truly distraught by all of this.

No, thanks.
How do you feel after reading this?
Tags: boat accident