Big drug bust confirmed by RCIPS after showing up on CMR

(CMR) A major drug bust has been confirmed and saw the authorities net over $200,000 in cash and drugs late last month. CMR had previously reported on this incident on our Facebook page and several posters claimed that nothing was found at the location.

Despite the RCIPS remaining mum until today it turns out that this was indeed a rather large drug operation.

At about 3:40PM on Thursday, 28 June, West Bay Uniform Officers conducted an operation under the Misuse of Drugs Law at an address off Watercourse Road, West Bay.

The property was searched and a large quantity of packages containing suspected ganja, along with drug utensils and weighing scales were found. Officers also found several portions of suspected cocaine, and seized a quantity of cash. 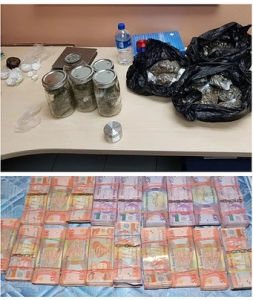 RCIPS and Customs officers conducted further searches of the property the next day, 29 June. During the searches, Customs canines directed officers to two locations where a further quantity of ganja was found, along with a significant amount of cash hidden in a cardboard box, bringing the total amount of cash seized at the location to over CI $220,000.