The Court of Appeals rejected former track coach Ato Stephen's attempts to appeals his conviction and sentencing. He sought to have his conviction squash or sentence reduced.

Stephens was convicted in August of misusing an information and communications technology (ICT) network to abuse a female athlete who had been a member of the track club he coached. He was sentenced to 18 months’ imprisonment; the maximum sentence is two years.

The Information and Communications Law specifically states that a person who knowingly uses an ICT network to defraud, annoy, abuse, threaten or harass any other person is guilty of an offense.

Attorney Amelia Fosuhene submitted that messages which Stephens sent to the girl asking her to send him photos of herself were not abusive.

Director of Public Prosecutions Cheryll Richards replied that the receiver of the messages, in this case, was a minor who had been encouraged, enticed or persuaded to act to her own detriment by sending Stephens pornographic images of herself. A reasonable person would have to think that the child had

The judges said that the messages, asking the girl to send semi-nude or nude photos of herself, had continued over a lengthy period, starting when the girl was 14 and continuing after she turned 15. The relationship had been one of trust because she was dependent on Stephens for the training and expertise he was able to give her as an athlete. The messages were discovered by the girl’s parents. 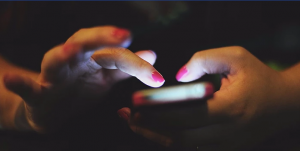 The issue was whether Stephens’s course of conduct fell within the provisions of the Information and Communications Technology Law. The argument before the judge and “skillfully reiterated” by Ms. Fosuhene on appeal was that in the context of the words used, this was not using the internet to abuse the victim because the words used were of an enticing nature without any pejorative or threatening language.

“We disagree,” Justice Moses said. Words not threatening to one person may be to a more vulnerable person, he pointed out. Similarly, words of a sexual nature sent to a consenting adult could be acceptable, but not when sent to a person not capable of consent. Such words were an aspect of ill-treatment of a minor, the judges concluded in dismissing the appeal against conviction.

As to the sentence, the judges noted that Ms. Fosuhene had agreed that 18 months was not excessive.

Stephens had also been charged with and found not guilty of indecent assault and gross indecency involving the girl. He is expected to be deported upon completion of his sentence.

No, thanks.
How do you feel after reading this?
Tags: Ato Stephens