Ansel Temprl: Why does UCCI have an overseas CFO consultant?

by CMR
in Ask The Marl Road
0

I saw your interview recently with Dr. Frank McField where he mentioned that his writer’s contract with the University College of the Cayman Islands was cancelled because of budgetary constraints. UCCI often complains of lack of government financial support and that they are cash strapped.

If the university is so strapped for cash can you explain why the college is paying a consultant CFO a monthly consulting fee plus flight and accommodations?

This is an interesting question and to be honest several months ago we received a similar query from someone else. Inquiring minds definitely want to know how this lucrative contract was obtained without anyone raising an eyebrow. Now that we have received it multiple times it’s certainly worth having a closer look at.

After contacting several persons, we have been able to ascertain the following details. Ansel Tempral has a contract with UCCI as a Consultant Chief Financial Officer (CFO) operating out of Canada. Apparently, he use to work for the college as a Senior Lecturer in the Department of Business from 2007. His online bio states that he has two decades of experience in accounting, auditing and manufacturing in Jamaica including with PWC.

The timeline of his tenure as CFO at UCCI appears to be quite unclear. His LinkedIn account indicates that he was a lecturer for less than two years and worked as CFO for over 10 years. However, we understand he was not in the CFO role anywhere near that length of time. Multiple sources indicate that he took over as CFO somewhere closer to 2016. Students confirm that he was still lecturing them up until 2014. In any event it appears he was both assisting in the CFO capacity and still teaching classes. 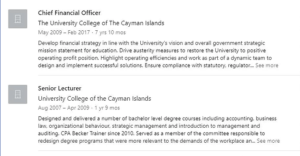 Tempral has an ACCA professional designation and is also a CPA. He acquired an “Executive MBA from the Florida International University” more recently.

At some point Tempral was moved out of the classroom environment into the office working as the CFO. We reached out to Mr. Tempral about details of his work history and additional details for this article but he refused to provide any information.

Some persons, including students and other faculty have indicated to CMR that he enjoyed a close relationship with his former co-worker, convicted child predator Dr. Pavlov Rameau. Several have noted concerns about his behavior with students including “candle light dinners”. Allegations of predatory behavior towards female staff have also been shared with us and there was an instance of the university wanting to terminate someone who had lodged a complaint against Tempral; but was unable to legally do so.

We do know that inappropriate sexual advances by faculty on the UCCI campus has been highlighted in the past with formal complaints being allegedly ignored by the management of the university.

One person remarked “he’s very slick and there were numerous stories of candlelight dinners with students and shared photographs to support these allegations”. One confided to CMR that they received a final grade not “fully earned” because he was clearly interested in some sort of relationship with them. Despite that, in that instance he made full advances when they were no longer a student of his.

At some point about two years ago Tempral tendered his resignation and offered UCCI a consultancy contract instead. Apparently, he informed the university that he was going to be headed to Canada to join his ex-wife so that he could obtain his Canadian citizenship. From what we have been able to ascertain his wife or ex-wife resides full time in Canada with their young son. We do know that his wife was resident here in 2014; but eventually migrated before him to Canada.

For completeness CMR reached out to her and she noted that they are no longer married and she has no relationship with him. That being the case persons are questioning even further why he would still be resident in Canada as opposed to returning to the Cayman Islands and simply applying for the post full time.

He was removed from UCCI's website at the time of his resignation and relocation overseas:

Initially UCCI refused his offer and hired a Caymanian CPA. She worked with the university for about 7 months and then resigned. The resignation of this CPA is somewhat interesting because many persons familiar with the situation offered up the following assessment that:

“She was setup to fail; systems were purchased, designed and optimized in such a way that she never had a chance there. Honestly, many thought that he purposely put things in place to ensure that no one taking over from him would have an easy time of it. There was a clear lack of controls in place that only he could explain and work it.”

We also understand that despite UCCI getting clean audits many were questioning the extensive travel expenses approved for Tempral before his departure from the Cayman Islands. Tempral had a female co-worker working with him that was let go from the university after he left.

Upon her resignation UCCI’s former president, Roy Bodden, then agreed to a 12-month consultancy contract paying somewhere in the region of CI$10,000 per month plus accommodations and airfare. This arrangement allowed Tempral to work remotely and come on island every so often.

For the purposes of his Canadian residency requirements we understand that the one exception under Canadian immigration laws is if someone is working as a consultant – the time away would not negatively count against the requirement of them remaining in Canada.

A part of the arrangement was to allow the bookkeeper previously terminated under the Caymanian CFO was able to return to her post as a bookkeeper. We understand she is his primary contact in the department locally and allegedly “his woman.” A point our sources indicate is well known around the university.

Another oddity is the fact that he has received some accommodation allowance as part of his contract. A close source indicates that he resides with his fiance and share a home with her.

“It was virtually impossible to get a new person and have them under study the outgoing CFO on such short notice. Tempral had setup the system and was knowledgeable about it. The senior management team agreed to an initial 1-year contract as he had a job in Canada and would be giving up his security there. Many people run a company without being physically present so we saw no issue with it.”

In fact, it appears that Tempral has a consulting business which he maintains and has not resigned from. The basis of Tempral’s relocation was said to be to acquire his Canadian citizenship but other sources have been informed by him that he was seeking to assist his ex-wife in obtaining hers. We are not able to verify the veracity of these statements to confirm which is actually the case but suffice it to say he left Cayman and obtained this contract. What we can also confirmed is that she lived in Canada from at least 2002 and worked as a freelance accountant in Ontario for at least 10 years before moving into the mortgage agent business; he has only lived there for a few years. Therefore, why she would need his assistance in obtaining her residency appears at odds with this timeline.

Since then the university has made no attempts to hire anyone locally to fill the vacancy and the arrangement has continued.

There have been numerous concerns about why this arrangement was entered into for such a long duration of time and why it has continued without any real assessment under the new presidency. Generally speaking, your sentiments that the university is cutting costs and do so by first getting rid of local Caymanian staff who are earning no more than CI$2,500 per month is accurate. It is also accurate to say that they would rather retain a foreigner who has no real connections to the Cayman Islands to work remotely earning the equivalent of a full-time salary plus additional expenses. Those additional travel expenses would definitely NOT have been incurred by a Caymanian or other expatriate resident on island.

This arrangement begs a lot of questions and to be frank we simply do not have all of the answers that you may be looking for. Hopefully, the above will at a minimum offer some insight into how this arrangement came about.

Dear CMR: Dr. Tasha Ebanks-Garcia is in the Cayman Islands and we understand that she is here to sort out...

DOA shelter Closed! 53 dogs NOT YET available for adoption