The newborn had not yet been given a name by her mother and was listed at the hospital as “Infant Baby Bowen.” Bowen, 27, remained hospitalized in critical, but stable condition but apparently passed away several days ago. She was shot three times and was rushed to the hospital in critical condition. 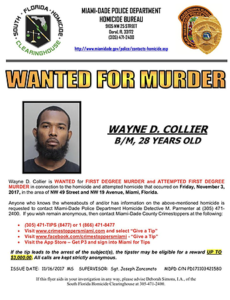 Police found out about the shooting about 5:15 a.m. through the Shot Spotter system, a microphone that detects the sound of gunfire in high-crime areas and tells police the location.

According to the RCIPS he was arrested yesterday shortly before 1:30 p.m. He was discovered after officers executed a provisional warrant at an address in Prospect .

He appeared in court earlier this afternoon. This is a developing story and as we have more information we will update this post.

CMR sources indicate that he has a Caymanian girlfriend and was staying with her at an address in Prospect. Apparently they have been together for several years and photos can be seen of them on her social media page – which has now been deactivated.

A social media post from earlier this week indicated that Heidy Bowen had died as a result of her injuries from the shooting. Her friend was pleading for someone to turn him in. Collier faces charges of two counts of first-degree murder.