The police tracked one of the boats to the West Bay shoreline, where it was abandoned near Uncle Bob’s Road.

Yoandy Ebanks (36) from West Bay and Terry Wright (39) from Jamaica were arrested shortly after. They have both since been charged with the importation of ganja in connection with the significant drug haul.

Ebanks is also facing charges of human smuggling and Wright with illegal landing. The two men appeared in Summary Court Monday and were initially remanded in custody as they awaited for the legal papers to be prepared.

Three other men on the second boat who escaped police on Thursday were arrested by customs officers on Friday in Cayman Brac. The crown has indicated that they believe the boats were connected.

All five men are expected to return to court later this week. 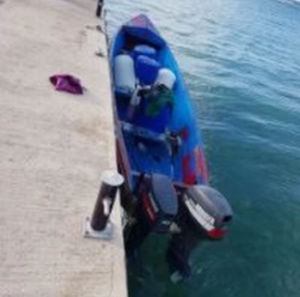 This blue canoe found off Cayman Brac 26 January 2018, believed by the crown to be involved in drug smuggling.