(CMR) GEORGETOWN, Guyana, CMC – The Cheddi Jagan International Airport (CJIA) re-opened this morning a few hours after a Fly Jamaica airliner made an emergency landing 45 minutes into its flight to Toronto, Canada. Six passengers were injured.

“We can confirm that Fly Jamaica flight OJ256 bound for Toronto has returned to Georgetown with a technical problem and has suffered an accident on landing.  At this time, we believe that all 118 passengers and 8 crew members are safe.  We are providing local assistance and will release further information as soon as it is available,” the carrier said in a statement.

Public Infrastructure Minister David Patterson confirmed that six people were injured during the incident and were being treated at the Diamond Regional Hospital.

“They are all stable and are being looked at,” Patterson said, adding that all the passengers and crew on board had been accounted for with “no reports of any broken bones or such”.

The Boeing 757 aircraft with 118 adults and two infants on board was forced to return to the CJIA minutes after its departure for Canada because of technical difficulties and over ran the airstrip on the emergency landing.

“Where the aircraft veered off is about the exact same place the Caribbean Airlines (plane did)… so fortunately for us on this occasion, the extension (of the runway) was there so they were able to utilise the extension,” Patterson said, adding that investigations into the matter had already started.

The plane with its eight crew members of six Guyanese and two Jamaicans, also had on board one American, 82 Canadians, 35 Guyanese, one Pakistani and a Trinidadian.

Patterson said that the flight departed Guyana at 2:10 a.m. (local time) and at 2:21 a.m., the pilot indicated “there was some hydraulic problem and he requested permission to return and he did”. 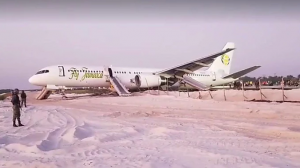 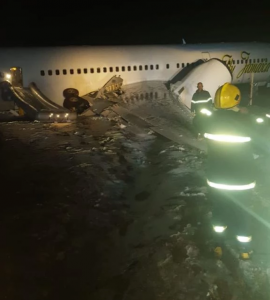 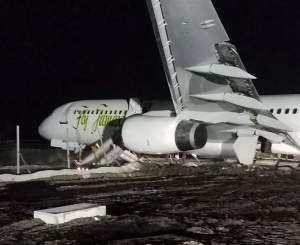 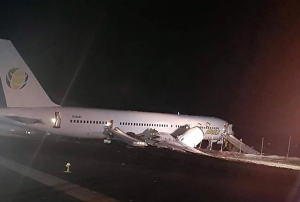 On landing, the emergency services were activated and since then an investigator from the Guyana Civil Aviation Authority has taken responsibility for the crash site.

Patterson said that the United States’ National Transportation Safety Board has been informed.

Fly Jamaica Airways was certified by the Jamaica Civil Aviation Authority (JCAA) in September 2012, and was cleared to operate in the United States by US authorities in December.

On November 16, last year the airline formed by a Guyanese businessman and three Jamaican shareholders, was given permission by the Guyana government to begin direct flights between Guyana and Cuba.