27 Omicron cases in Cayman? Police shutdown Rub-A-Dub out of concerns

(CMR) There are now 23 suspected cases of the Omicron variant in the Cayman Islands along with 4 confirmed confirming making the likely total 27 it was confirmed late Saturday night. These details come after 10 suspected cases between Thursday and today. It appears that the variant is doubling every two days. CMR exclusive sources have shared that the first two cases were brought in by Caymanians coming from overseas and within a day they had begun to infect others around them.

Omicron is an extremely contagious variant, that it doubles every two to four days. The US on Friday was averaging 121,707 new Covid-19 cases each day, according to data collected by Johns Hopkins University. Fourteen states saw an uptick of at least 10% in cases over the past week compared to the previous week.

Whilst is it not clear yet if Omicron is a milder variant the fact that it spreads so quickly will undoubtedly overwhelm hospitals worldwide experts have shared. Most hospital networks are already battered by the Delta variant. The variant is expected to become the “dominant strain” in the coming weeks, CDC Director Dr. Rochelle Walensky said on Friday.

UK epidemiologists said this week they found no evidence Omicron is causing milder disease there, although the Imperial College London team also said there was not much data to go on yet.

In light of the increasing concern over the Omicron variant events such as Saturday night's Rub A Dub 90's Cooler Festival hosted by local promoter Cedric Gidarsingh has been canceled pursuant to the Public Health Act (2021 Revision). The Interim Chief Medical Officer, Dr. Autilia Newton issued an order prohibiting public event under section 58 of the Public Health Act which gives the CMO emergency powers.

The event was sold out but sources shared that the police had concerns the event was likely oversold and therefore they would not be able to maintain the current outdoor numbers of 250 persons. The festival was rescheduled after it has been previously posted in September due to the community transmission outbreak of largely the Delta variant.

As concerns grow about how quickly the new variant will spread in the Cayman Islands the medical experts and political leaders are strongly urging the public to get the booster shot if they qualify for it. The community should be bracing itself for increased hospitalizations.

This will infect our population with at “dizzying exponential growth” rate.

About 68,900 Americans are hospitalized with Covid-19, according to data from the US Department of Health and Human Services. More than 20% of all ICU beds in use are occupied with Covid-19 patients. Hospitalizations numbers have already started to trend upwards particularly in larger states such as California and New York.

The government has also issue an advisory strongly recommending the cancellation of all large events. 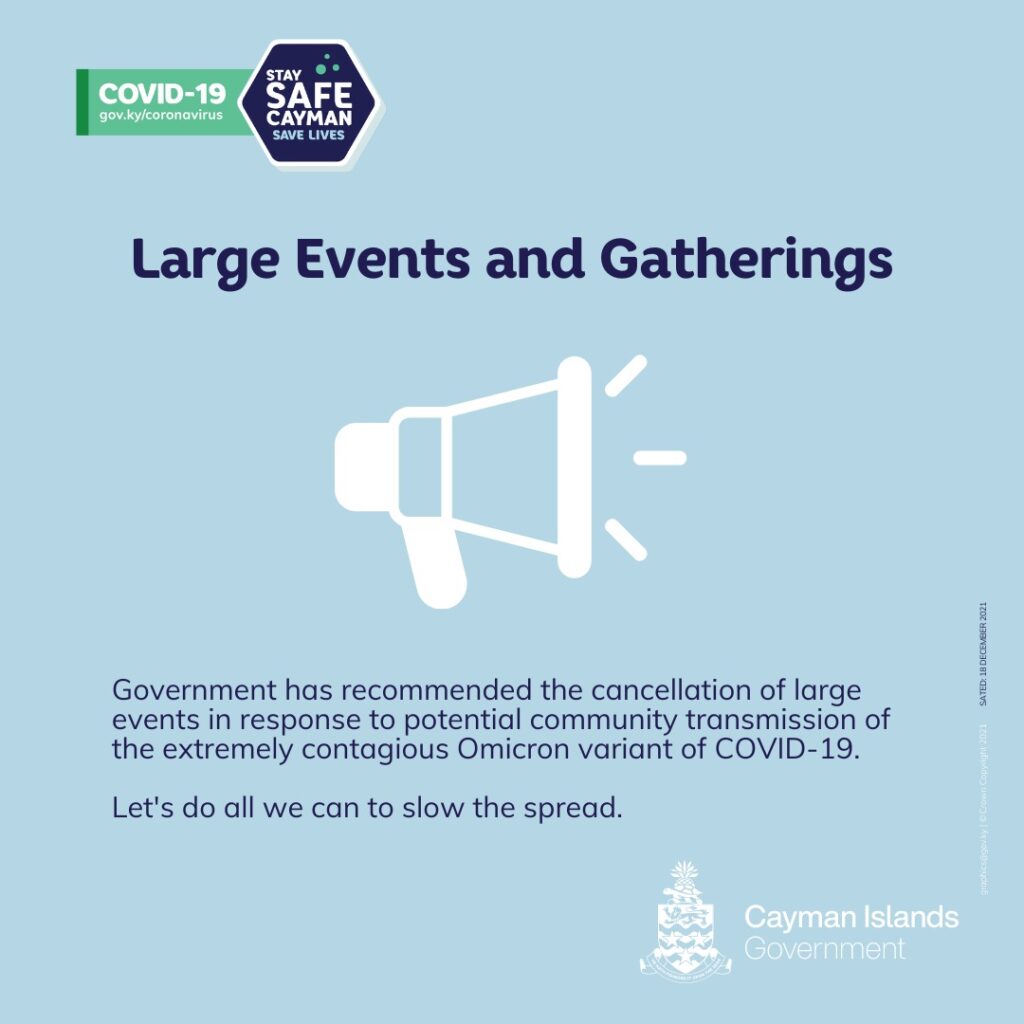 Trinidad's government employees to get vaccinated or lose their salaries