(CMR) Cayman Marl Road has begun trying to enforce a Grand Court judgment against John Clay Felder (78) after he was ordered to pay the legal fees for Sandy Hill in April 2022. However, in-depth research has revealed that Felder faced foreclosure on his home days before agreeing to pay Hill's $50,000 legal bill.

A move Hill claims was “obviously not genuine and meant to deceive the Cayman courts.”

When Hill's attorney contacted Felder on July 21 about the payment of the legal fees, he indicated that he was going to appeal the decision. This was despite signing a court order that clearly indicated it was a full and final settlement of the matter. In fact, Judge McMillian went to painstaking lengths to ensure that all parties understood there would be no further hearings or appeals relating to this matter. He specifically brought up his concerns before he signed off on the agreement.

CMR's research team found a Notice of Default against Felder that would have been done prior to him agreeing to the Grand Court Order. A material fact that neither he nor his attorneys informed the Cayman Islands Court about. The filing date for the foreclosure notice on his 2,248 sq. ft. family residence at 7545 Red Cravat Ct., Columbia, Maryland, was filed on April 1, 2022, and recorded a mere four days before the Cayman order of April 19. 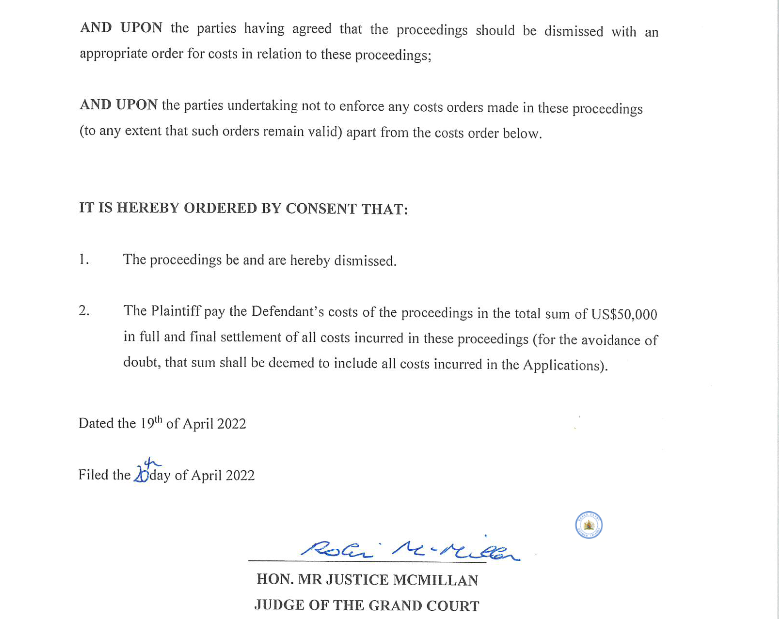 Records show that Felder obtained the mortgage in November 2017 for US $354,327.00. From all appearances, it appears that Felder would have been fully aware of the pending foreclosure and had no intention of ever paying his latest debt to Hill. Sharing her thoughts on the matter with CMR, she noted:

“I had concerns from the onset when his lawyers approached about an offer; this man has an atrocious financial record and expressed that to both my lawyers and his. I recall his lawyers said that he would pay it and here we are, now finding out that, at the time, he was facing foreclosure proceedings. I cannot help but wonder what his lawyers knew about his position as they approached about with this offer to settle.”

As it turns out, Felder's history of non-payment is prolific. He has multiple lawsuits against him in the Cayman Islands, including one for $180,000 and another for $138,000. Former MP David Conolly issued a Bankruptcy Notice on Felder in March 2021, attempting to recover KY $31,000.00.

Despite this history of outstanding debt, he does not appear to be stopping with the registration of companies. His USA company has also had its license revoked for failing to file annual reports. According to Florida corporate records PREMIER AUTOMOTIVE EXPORT, INC had its business license revoked in September 2022.

PREMIER AUTOMOTIVE EXPORT, LTD., an entity CMR previously reported on, remains in good standing according to a Maryland corporate records search. In 2020 it experienced a change in status from ‘Incorporated In Good Standing' to ‘Incorporated'.

According to his social media accounts, he started a new company peddling COVID-19 medical supplies called NOIZ Medical Supplies, LLC., in February 2020. That Domestic Limited Liability Company was not registered until March 2021 in Clarkesville, Georgia. His partner is a man name, Brian Dean.

Felder also owes over $300,000 to people from his time in the Cayman Islands, according to a 2021 joint liquidator's report, which determined that it was futile to pursue any further action as there was simply no money there.

Felder continues to make various claims about his entry into the Cuban electric vehicle market and got a recent article published in Caymanian Times claiming he “has just received a historic license from the American government to sell his motors to Cuban nationals. He claims that he recently traveled to Cuba to deliver a motor scooter.

Inquiring as to what will be the next move for Hill, she indicated that she is reaching out to authorities in the United States to see if any criminal charges can be brought against Felder. He does appear to have several other land parcels in his name. in Maryland and North Carolina.

She is also seeking legal advice against his former Cayman attorneys, Priestleys.

No, thanks.
How do you feel after reading this?
Tags: Cayman Automotive Leasing & Sales Ltd.John FelderPremier Automotive Export

(CMR) A man has filed a lawsuit against attorney Anthony Akiwumi after he allegedly borrowed $80,000 from him but neglected...