(CMR)  Several redundancies are now looming at Compass Media as the parent company of the Cayman Compass and Compass Print will close its print shop permanently on 30 April.

Compass Media, in a notice posted on social media,  said the move comes after a steep rise in operating costs, including paper, supplies, and insurance, as well as problems with aging machinery.

It further stated that with the absence of duty waivers on printing goods, it has become difficult for the company to compete with the services offered in the United States. However, the company said it would continue to print its local magazines. 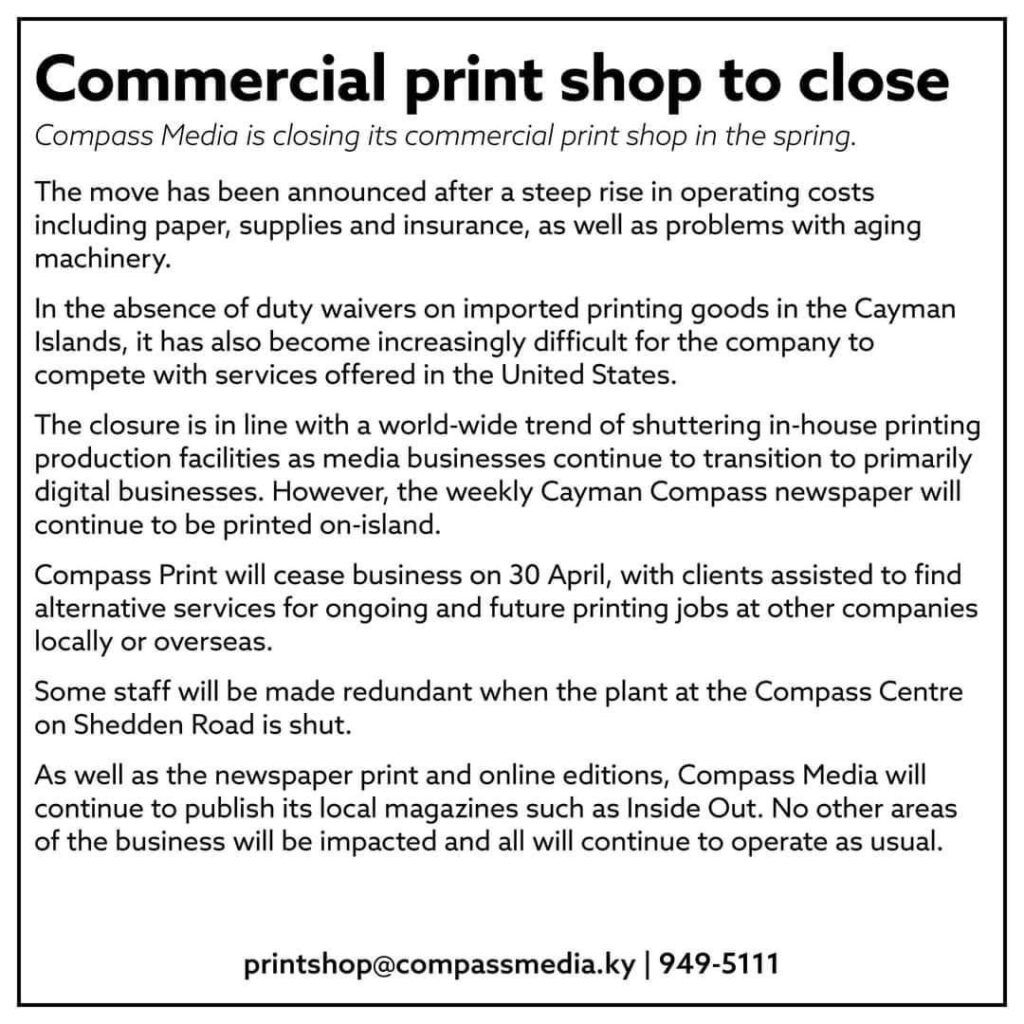 Compass Media has been having a turbulent last few years as plans to expand operations have not been successful despite its takeover of Hurley's Media.

In 2020, the company admitted it was experiencing financial difficulties and sought donations from the public. In a plea to the public, Compass Media said it needed its readers' support then more than ever.

Following its acquisition of Hurley's Media, Compass Media laid off several of its long-standing employees as it attempted to restructure and strengthen the business. However, sources revealed business had not grown as expected.

A source revealed in 2021 that there were growing concerns among employees at both the Compass and Hurleys Media, who had experienced several redundancies and an uncertain future. Sources also indicated then that the recently implemented paywall had not been as successful as they anticipated, and reporters were being pressured to produce more content with fewer resources.

Despite the paywall reportedly not being an economically successful business model, it remains in place over two years later.

In 2021 former publisher Kathleen Capetta was allegedly given an ultimatum to turn the company around, or she would be unemployed, and the Compass may shut down entirely. She resigned at the end of 2021, with a new publisher expected to take over in 2022.

The Compass said it would have hired a local publisher to take over; however, since then, they have not revealed if they have hired anyone. CMR was informed that Capetta had remained on remotely as an advisor and that Compass Media was attempting to use a group approach for the management of the organization, but no publisher was hired.

The Compass is the last Caymanian print media company to succumb to the changing face of media, impacted by the realities of the worldwide market where more are gravitating to online platforms.

No, thanks.
How do you feel after reading this?
Tags: Cayman CompassCompass Media

(CMR) Jamaica-based security company Guardsman Group will be expanding to the Cayman Islands. According to the Financial Gleaner, the company...