“We are still having major issues getting payment from Cayman First. I know you posted about them a couple of months ago and they made a few payments after that, but no one is responding to us anymore.”

(CMR) Cayman First Insurance Company (CF) continues to struggle with paying its claims to hospitals and local physicians. The situation has gotten so grim that a growing number of physicians are refusing to accept their coverage – forcing patients to pay out of pocket. 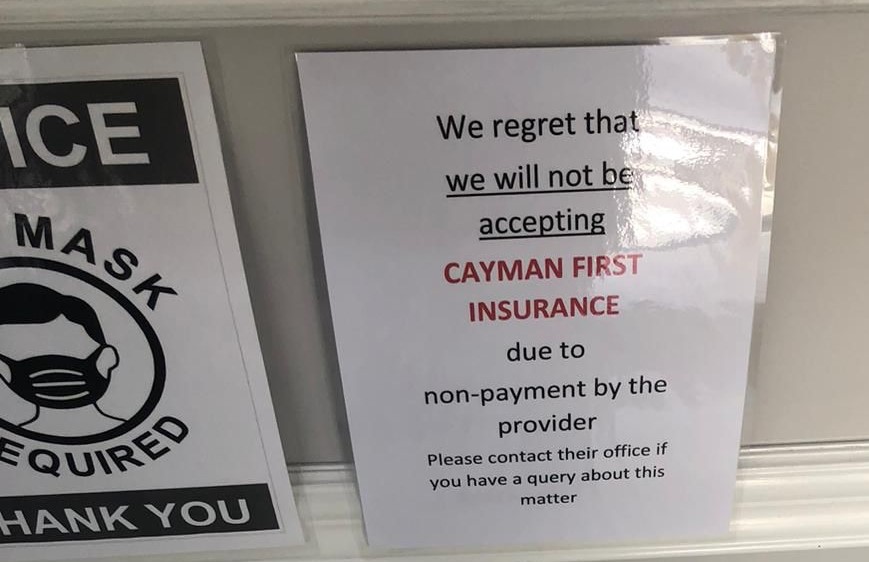 CMR initially reported that several regulatory agencies including the Cayman Islands Monetary Authority (CIMA) received complaints about the delayed handling of claims. This prompted Cayman First to issue a statement claiming that they were having no significant issues, but a recent changeover in computer portals caused minor delays in payments.

In the aftermath, CF reached out to several physicians on the island and attempted to smooth over the situation with them. CMR understands that one hospital was owed “over $3M” and although not paid in full received a “significant payment” on the arrears.

Management rushed to undertake a public relations campaign to make the company appear financially stable and reassure physicians their payments would be processed in due course. They issued a paid advertorial in a local newspaper touting their insurance rating and financial status.

Some physicians received payments after the CMR story of about 20% or less of what is owed promising that the remainder would soon follow. However, CMR continues to receive complaints from medical professionals who are owed hundreds of thousands of dollars.

Since the initial expose in October some practitioners have informed their clients that they are no longer able to accept Cayman First, forcing patients to pay out of pocket and then seek reimbursement from Cayman First – a process this is arduous and delayed.

There are accusations that CF is purposely stalling the processing of patient claims by claiming there are issues with the patient claims or refusing payments entirely because of “pre-existing” conditions. They have denied using any underhanded tactics.

CMR sources have also revealed that no regulatory agency has taken any firm action against Cayman First but that “CIMA may have issued a non-formal warning letter.”

A medical director shared with CMR his thoughts:

“Physicians are really getting the short end of the stick and there appears to be little enforcement in place. There is a misconception that we are the ones with the upper hand but instead it's the insurance company. In fact, we have not even seen a fee increase in the standard fees in about 22 years. Tell me what industry has not increased its fees in two decades.”

They noted that everything has gone up for them except their fees. In the last year alone, the cost of a box of surgical gloves has quadrupled, but our fees have not been reviewed by the regulators at all.

It remains to be seen when or if Cayman First will ever get their claims processing caught up.

No, thanks.
How do you feel after reading this?
Tags: Cayman First Insurance

(CMR) Jamaica-based security company Guardsman Group will be expanding to the Cayman Islands. According to the Financial Gleaner, the company...