(CMR) Students attending government high schools will have the chance to earn a scholarship valued at up to CI$100,000  per year.

The Ministry of Education (MoE) said its newest scholarship, ‘The Government High Schools Scholar Award', aims to provide full tuition support to the most outstanding Caymanian male and female scholars accepted to pursue overseas undergraduate tertiary studies at some of the world's most prestigious universities.

Eligible candidates must be graduating from or have graduated from a government high school with a minimum of ten passes and grades of A, one or distinction. They must also have achieved the top academic performer award in their graduating year.

“I am honored to announce this new scholarship that will expand access to the highest quality education for government school graduates who exhibit academic promise. And I hope this scholarship will likewise incentivize government school pupils to exert greater effort to excel academically and, by so doing, ultimately raise the profile of our public schools,” Minister for Education Hon Juliana O'Connor-Connolly commented.

Students are not required to apply for the Government High Schools Scholar Award. Scholarships will be awarded to the two most outstanding graduates (male and female) from among those that meet the following criteria: 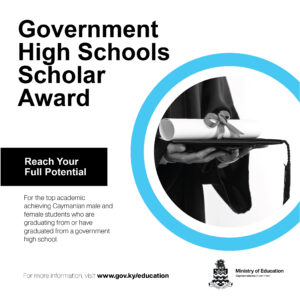 -The candidate must be Caymanian.

-The candidate must have attended a government high school in the Cayman Islands for at least four (4) consecutive years.

-The candidate must have achieved the top academic performer award in their graduating year with a minimum of ten (10) cumulative Level 2 passes, with the minimum grades “A”, “1”, or distinction.

-The candidate must have sat all external examinations from within the public high school enrolled at.

-Candidate must be accepted at a highly competitive university as listed on the Quacquarelli Symonds (QS) 100 Top Universities for the current academic year.

The first Government High Schools Scholars will be announced in January 2023.

To learn more about the Government High Schools Scholar Award, visit the Ministry of Education's website at www.gov.ky/education.

No, thanks.
How do you feel after reading this?
Tags: Julianna O’Connor-ConnollyMinistry of Educationscholarships