(CMR) Following concerns from the public regarding the national identification register, the Ministry of Investment, Innovation and Social Development has revealed changes will be made to the Identification Register Bill 2022 at the committee stage in Parliament next week.

The changes will address the concerns that have arisen during the past week about elements of the bill. Although the ministry stakeholders shared that many of the concerns stem from a lack of understanding, after some 35 years of trying to move a national ID bill forward, they are committed to the delivery of a national ID system for the Cayman Islands.

One significant change will be the ability to opt into the entire registry system as “early adopters.” Although the mandatory information collected was minimal, opponents of the system opposed it completely, citing privacy concerns.

The ministry experts say that, ironically, the register framework would be the most secure that the Cayman Islands has in existence, and most of the information is already kept in other non-centralized locations.

Initially, the ability to obtain an ID was optional but not included in the register. However, after feedback from the general public, the recommendation is being made that registration also be optional, removing what some say is a barrier to accepting the legislation.

The government had planned to put every legal resident's name, date of birth, gender, and status on that register, with people able to choose to apply for a National identity card with its own unique identity code. However, with opposition to the bill, registration is also now optional.

A Christian civics group led by Kattina Anglin and some of her anti-vaccination colleagues stepped forward and started to criticize various elements of the bill. This prompted the Progressives party, which had previously issued the RFT tender for the system, to now claim that more consultation is required.

Ironically, sources revealed that upon receiving the bill, they expressed no concerns or desire for an extension of the consultative process and fully supported it. One political observer noted that this is a major paradigm shift for the country to finally move forward with the adaptation of a national ID system, and some level of resistance should be anticipated, but the political arm was being disingenuous.

They noted the duplicitous nature of the opposition, who not only supported the forward movement of a national ID system during the 15-year tenure but did not engage in any public consultation on the matter during the tenure.

During a recent interview with CMR, Deputy Chief Officer Charles Brown and Ian Tibbetts explained that people not in the register will not be denied access to any services. Brown noted that in some instances, people who were against the bill had merely misconstrued the sections. As a result, proposals were being made to make changes to ensure that there was sufficient clarity on several key points:

The definition section (h) originally noted that future changes to the optional list of items that can be added by an individual could have been brought by way of regulations. That is now being changed so that any and all changes can only be brought by an act of Parliament. 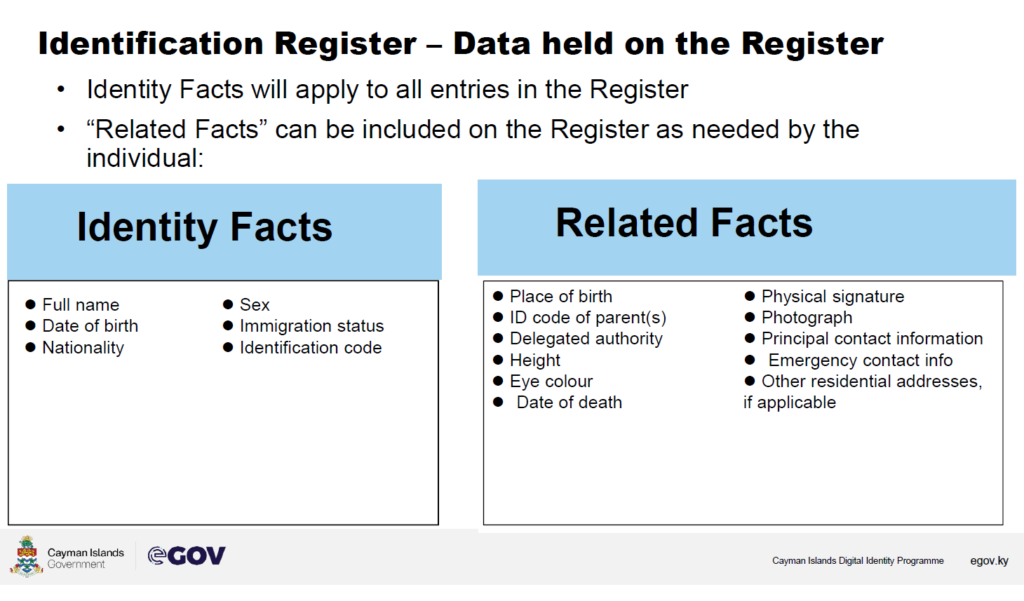 “We still operate with paper; we are now laying the foundation to operate a new paradigm to operate digitally, proving who you are without being there physically…This is just allowing people who want to embrace technology to do things more efficiently,”

Another change that is being submitted is in relation to the embedded audit trail security feature, which is designed to allow for full transparency of who is accessing a person's information.

This allows the ID holder to see who is viewing their information. This embedded security audit trail feature is designed to give users additional resources and to build confidence in the system as they themselves can see those logs.

Tibbets explained that just like the Data Protection Act, there's a provision for law enforcement entities to be able to utilize the information for investigative purposes. He noted that there is an “element of transparency baked into the system” for the registered person, but obviously subject to the restraints of investigative bodies.

Users are able to see their own information as well as the information that has been accessed and by what entity.

The provision was taken verbatim from the Data Protection Act and is now being used by critics to question the “nefarious reasons” for this. However, the team stressed that even in investigative matters, the system is still capturing the same information.

The individual may not be able to see those logs to preserve the integrity of an investigation, but the audit trail still exists so that if need be, any oversight body can have access to that information to keep even the police accountable.

Brown noted that the section made reference to “financial investigations,” but this appears to have confused people thinking there be financial information being kept in the register, which is not the case.

“Those exact provisions exist in the Data Protection Act right now, by those same entities”.

Tibbetts explained that the bill has a clause that incorporates the obligations of the registrar to implement security measures and maintain security over time.

There is also an amendment to the section dealing with the duties of the registrar under section s.14(1)(h), which gave the registrar the “power to meet international obligations” in regard to the register.

He explained this was to ensure that the register continues to meet international system standards. However, he confirmed that it is being misconstrued, with some people being worried about it, including the words “any international standard.”

Some people expressed that this clause would bind the government to allow international obligations on the country, but that was an erroneous interpretation.

That provision will be removed entirely to build trust and ensure clarity.

A change of clause 29 of the bill will ensure that no one will be denied access to services on the basis they have not registered for the national ID system. That section speaks to public authorities being able to interact with the register.

To make it painstakingly clear, the wording has been changed from the government will require the use of a card to be government may rely on the card. There will also be an addition that government will not withhold access to any services because a person is not in the register.

“It is a very pivotal piece of infrastructure, in our opinion, laying the groundwork for a future state to happen. We can dream about what the future is. You can have lots of power when you are not in front of someone,” Mr. Brown stated.

He explained that with the national registry, persons who leave Cayman and may be living overseas would not need to return to the island to conduct business but can apply for various documents from wherever they are.

“If we have a national disaster, God forbid, and you use all your available forms of ID, you have the register that is a basic backbone set of information that can prove who you are… It brings new power to what the citizens can,” he explained.

No, thanks.
How do you feel after reading this?
Tags: Charles BrownIan TibbettsNational Identification System