(CMR) The RCIPS is informing the public that several road closures and traffic diversions will be taking place to facilitate the Cayman Islands Air Show Flying Display and Aircraft Exhibit on Saturday, 3 December. 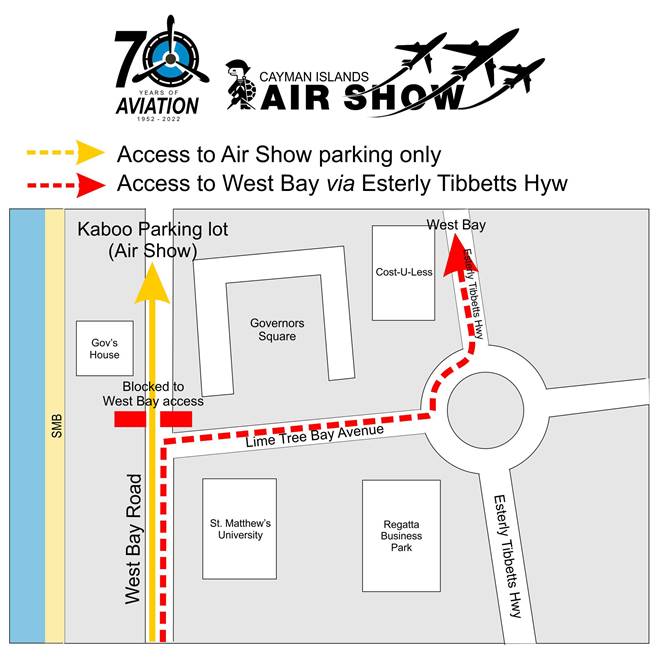 There will be no public access to the parking lot of Seven Mile Public Beach parking lot between Friday, 2 December at 8 AM and Saturday, 3 December, at 6 – due to the Air Show Vendor Village. 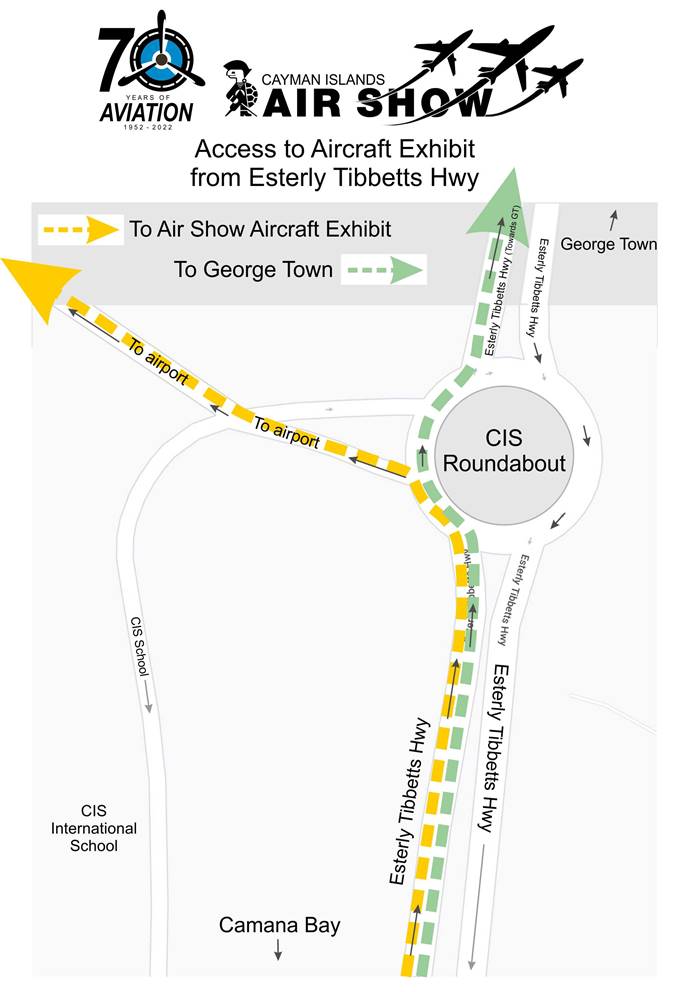 Parking will be available at the KABOO site. There will also be parking available at Camana Bay, with a shuttle service provided.

There will be traffic management in place for the northbound lanes of the Esterley Tibbetts Highway, between the Seven Mile Public Beach roundabout and the Yacht Club roundabout, on Saturday, 3 December, from 6 AM to 2 PM. 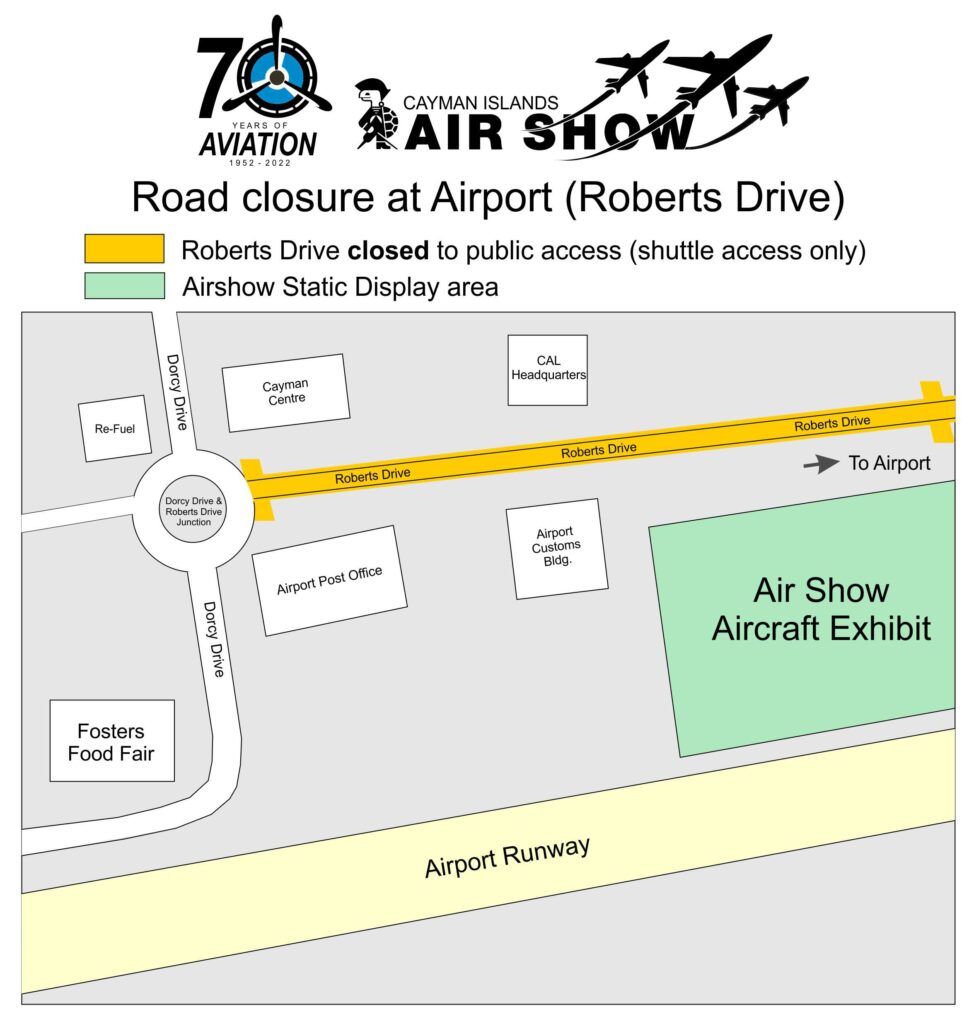 Roberts Drive will be closed to westbound traffic coming from Breezy Way, from 12 PM on Saturday, 3 December. Both lanes will be closed between Dorcy Drive and Breezy Way from 2 pm to 6 PM.

Persons traveling to the Owen Roberts International Airport during these times will be required to do so via Red Gate Road. Persons can also travel to the airport or Aircraft Exhibit via the Esterley Tibbetts Highway by traveling southbound and taking the airport connector road east of the CIS roundabout, which will be temporarily opened during these times.

The Cayman Islands Coast Guard is also informing the public that a temporary maritime restricted zone has been enacted to ensure marine safety during the Cayman Islands Air Show. On Friday, 2 December, and Saturday, 3 December,  between the hours of 9 AM and 2:30 PM, no boating activity is permitted between Heritage Club and the beach just north of the Governor’s Residence on West Bay Road. The area of restricted access is from the waterline extending outward to where the water changes to darker blue. 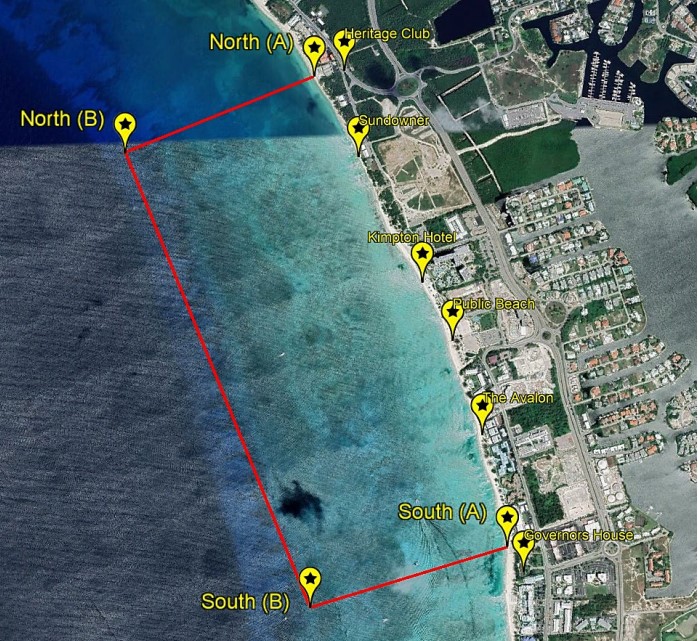 For boaters with GPS devices, the following coordinates can be entered into your devices to ensure compliance:

This TMRZ is established in accordance with powers granted to the Commandant of the Coast Guard and with the approval of HE the Governor.

Additional information, including on restrictions on drone usage during the Air Show, can be found at: https://www.caymanairshow.com/en-us/things-to-know

No, thanks.
How do you feel after reading this?
Tags: Cayman Islands Coast GuardRCIPS