(CMR) The Cayman Island's Premier Hon. Wayne Panton issued a statement on Friday evening apologizing and taking full responsibility for a traffic gridlock that crippled thousands of people around George Town. Calling it “an inexcusable traffic jam,” he noted that he was also stuck in traffic, barely able to move.

His statement went on to say that although they did not know what exactly caused the log jam, he noted that he believed that the road closures were due to the Pirate's Week Road closures around central George Town.

He accepted that this was an intolerable disruption to the lives of commuters and that he was already in contact with the police commissioner to re-evaluate the approval process for road closures “to make sure you never have to suffer this again.” Together they would be seeking to speak with the organizers of the Pirates Festival committee.

“Road closures clearly only compound the problem of the unrestricted importation of hundreds of cars every month. We have got to get on top of the situation a lot quicker. And I can promise you we will be moving fast to try to address this problem. Rest assured, this is unacceptable.”

Before the Premier issued his statement, various members of the community sent CMR numerous messages demonstrating their frustrations of being stuck in traffic and unable to move for hours on end. Some people shared they had never seen it this bad in all the time they have lived in the Cayman Islands. It was taking about two hours to travel from Camana Bay to Crewe Road.

Some people abandoned their vehicles on the Esterley Tibbetts Highway and started walking. Some even ran out of gasoline. The gridlock caused some people to start to express a bit of road rage and began unnecessarily honking their horns.

For the first time, the annual Pirates Week Festival was handled by The Ministry of Youth, Sports, Culture & Heritage (MYSCH). It has received a huge number of complaints from vendors and general members of the community alike. The delays caused people to miss their flights to the Owen Roberts International Airport.

“I was getting pissed off by the minute, my wife had to walk from her work to meet me almost 400 meters away to where I was.”

Fire service and ambulance services were also busy and stuck in the unbearable commute.

A motorist stuck in Dart's tunnel observed this:

“Sitting here in the tunnel by Camana Bay watching an ambulance stuck in traffic as well. Lights going and everything But can’t move. Whoever it is they need to get to will be dead by the time they get there”

During the CMR morning show, the traffic had already begun building up as TCHT Host Sandra Hill warned commuters to stay away from the area if possible. CMR will do a post-event analysis in the coming week. 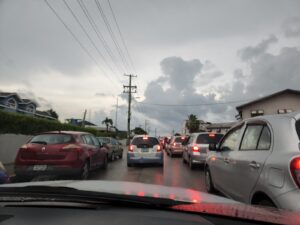 The RCIPS issued a statement late on Thursday afternoon about the closure.

No, thanks.
How do you feel after reading this?
Tags: traffic gridlock

(CMR) The RCIPS is advising the public that Arch & Godfrey (Cayman) Ltd will be conducting construction work on West...

(CMR) In order to facilitate the installation of underground CUC ducts in the area, a section of the eastbound lane of...

(CMR) As part of the Central Business District Enhancement Project Phase One Upgrades, Cardinall Avenue between Seafarers Way and Albert...

Road works to cause road closures off Walkers Road

(CMR) The National Roads Authority (NRA) and its subcontractor will undertake milling and paving works on a section of Walkers...

(CMR) Due to the current weather conditions and wave activity on the George Town Waterfront, caused by the passage of...