by Renae Stampp
in Tourism
0

The new weekly Los Angeles service is the first in the Caribbean and is the latest addition to Cayman Airways' expanding network, highlighting the significant role that Cayman Airways continues to play in growing and sustaining the Cayman Islands tourism industry.

The Hollywood-themed ribbon-cutting ceremony for the inaugural flight KX480 from Grand Cayman to Los Angeles featured themed desserts and gifts for passengers, while in Los Angeles on Sunday (6th November), a ribbon-cutting celebration was held for the inaugural flight KX481 destined to Grand Cayman, with Cayman-inspired entertainment, refreshments and gifts available for passengers.

“Opening an air bridge to new markets such as this one, will drive inbound visitation and grow tourism opportunities for our country because our national airline is making it easier for travelers to get to our Islands,” said Tourism Minister Kenneth Bryan.

“Over the longer term, however, the route's success will depend on the continued collaboration between the Ministry and Department of Tourism, and our partners in the tourism industry, including the CI Film Commission, the financial services sector, and a host of other essential industry sectors working collaboratively together to leverage business and leisure opportunities.”

The LAX service also brings Cayman closer to Hollywood, one of the largest film hubs in the world, making it easier for LA-based production companies to capitalize on the Cayman Islands as a premier location for film, television, music videos, photoshoots, and advertising productions. In 2019, LAX airport handled 88,068,013 passengers, making it the world’s third busiest and the United States' second-busiest airport.

“The launch of this new route has long been a dream for the Cayman Islands, and for Cayman Airways,” said the airline's President and CEO, Mr. Fabian Whorms.

“The LAX route has been realized thanks to our new Boeing 737-8 fleet; one of the most fuel-efficient aircraft ever. Initially, the flight will operate once per week, but based on initial bookings, we are certain that demand will quickly result in increased frequency in the near future,” he added.

Passengers on board the historic first flight from Grand Cayman to LAX included a mix of public and private sector officials, including Minister for Tourism Hon. Kenneth Bryan, Parliamentary Secretary Dwayne Seymour and representatives from the Islands' major hotels and accommodations sector; along with representatives from other industry organizations such as the Chamber of Commerce, the Cayman Islands Tourism Association, Cayman Airways, the CI Airports Authority, the CI Civil Aviation Authority, the Ministry of Border Control, and the Cayman Islands Department of Tourism, among others.

While in Hollywood, the Department of Tourism held a ‘Cayman Reception’ showcasing local musicians, Carnival models, and dancers to promote the new route. The celebratory event facilitated further networking between the various industry stakeholders present to discuss further opportunities within the Cayman Islands.

During his official remarks at the event, Minister Bryan described the work taking place behind the scenes between the CI Film Commission and Cayman Airways in offering special rates for location scouts, production crews, equipment, and VIP greeters for talent originating from California.

The Minister later announced a planned introduction of a Production Incentive Rebate Program. This initiative would begin in 2023 with the aim of continuing to strengthen the US film industry’s relationship with the Cayman Islands.

To date, the Los Angeles route is Cayman Airways' longest commercial flight, pushing the Denver route into second place. The new nonstop West Coast service will operate weekly, departing Grand Cayman on Saturdays and returning from Los Angeles on Sundays. Inbound flight time is just five and a half hours.

“On behalf of the PACT government, I wholeheartedly offer my gratitude to the teams at Cayman Airways, the Airports Authority, Civil Aviation and the Department of Tourism for all their hard work throughout the process of transforming this new route to Los Angeles from a dream to a reality,” said Minister Bryan.

The Cayman Airways Los Angeles route will operate year-round once-weekly service from GCM to LAX on Saturdays and returning from LAX to GCM on Sundays. For details and to book, visit www.caymanairways.com or call Cayman Airways Reservations on 949-2311. 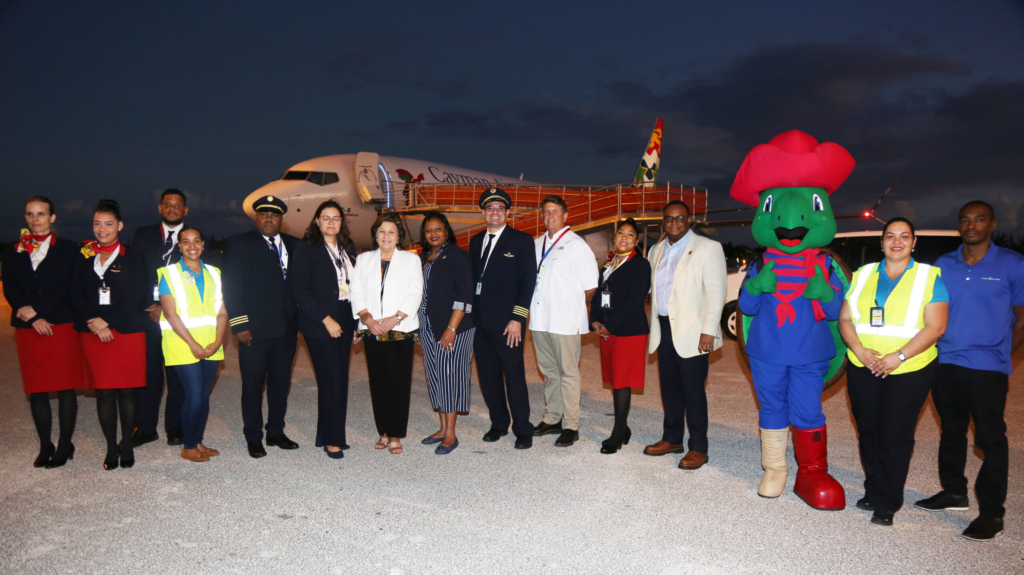 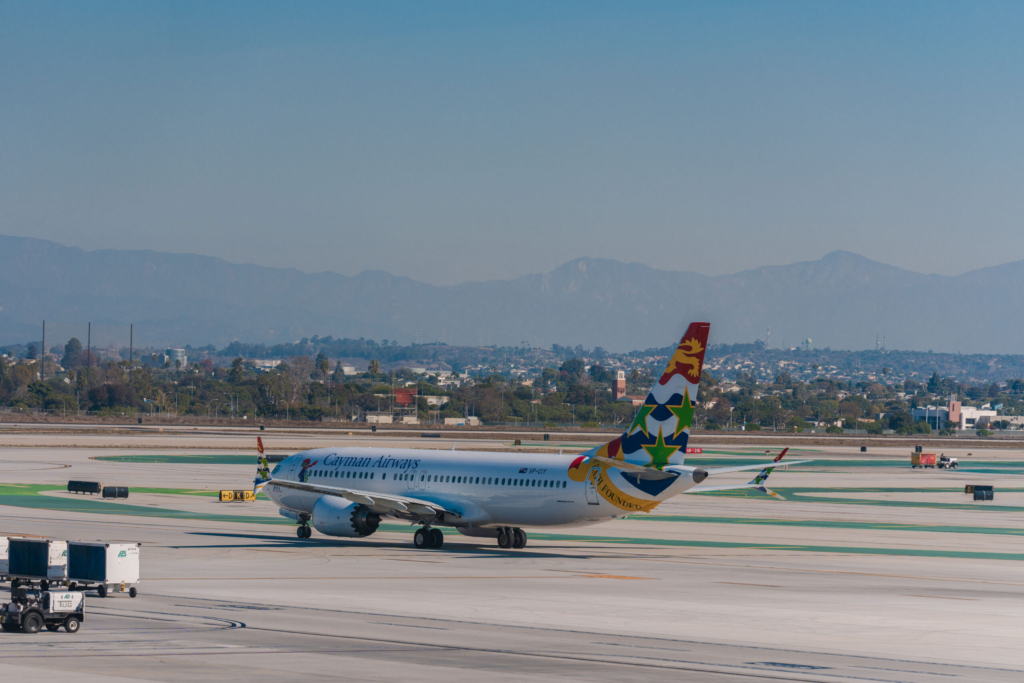 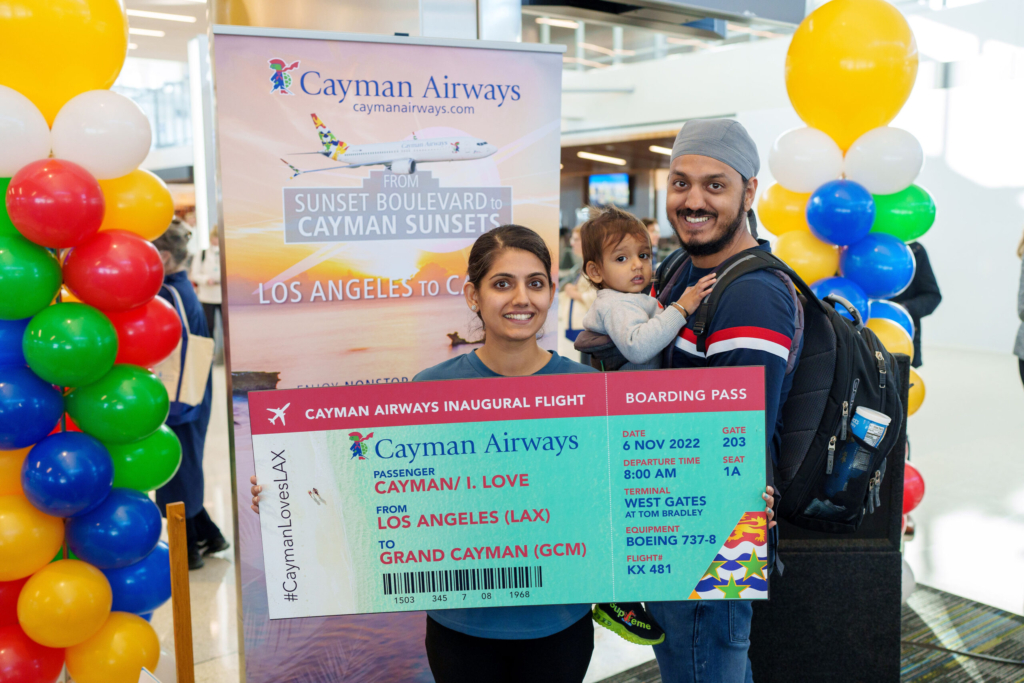 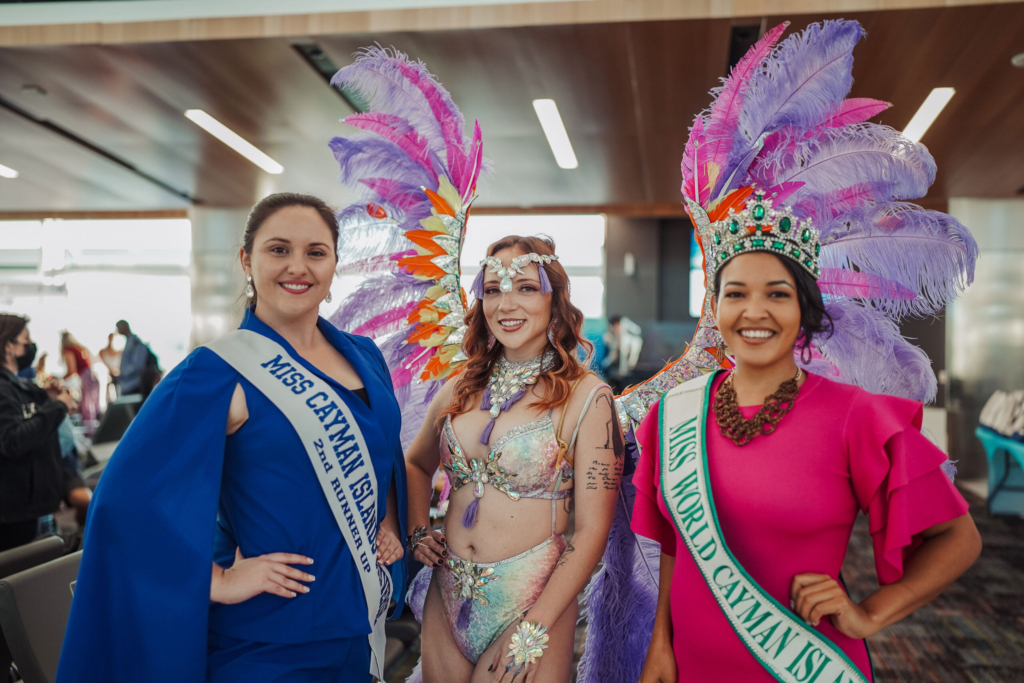 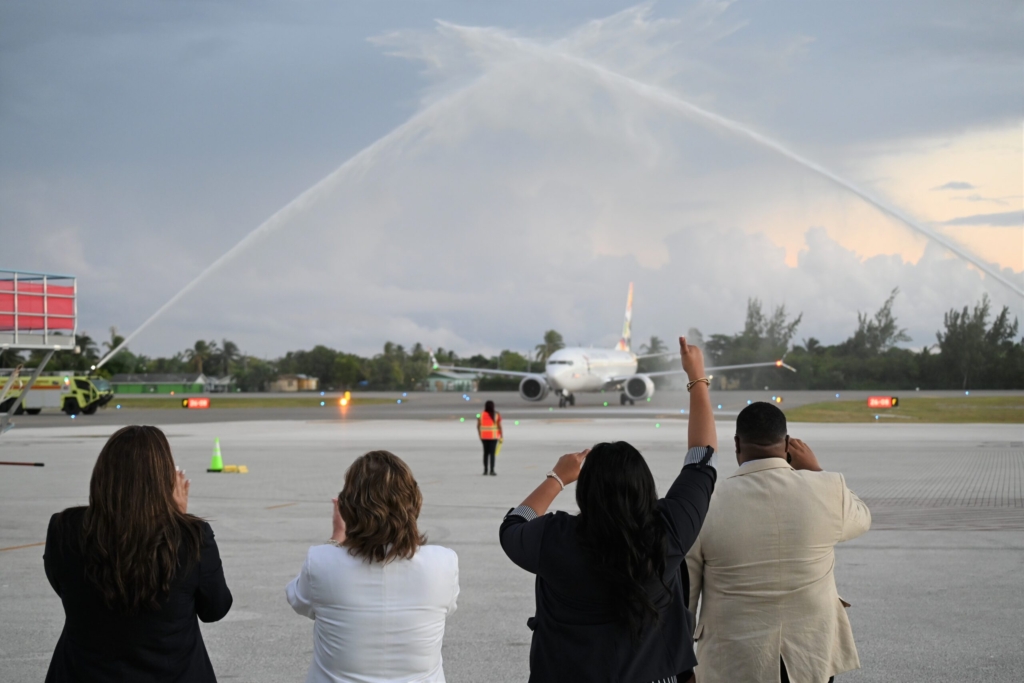 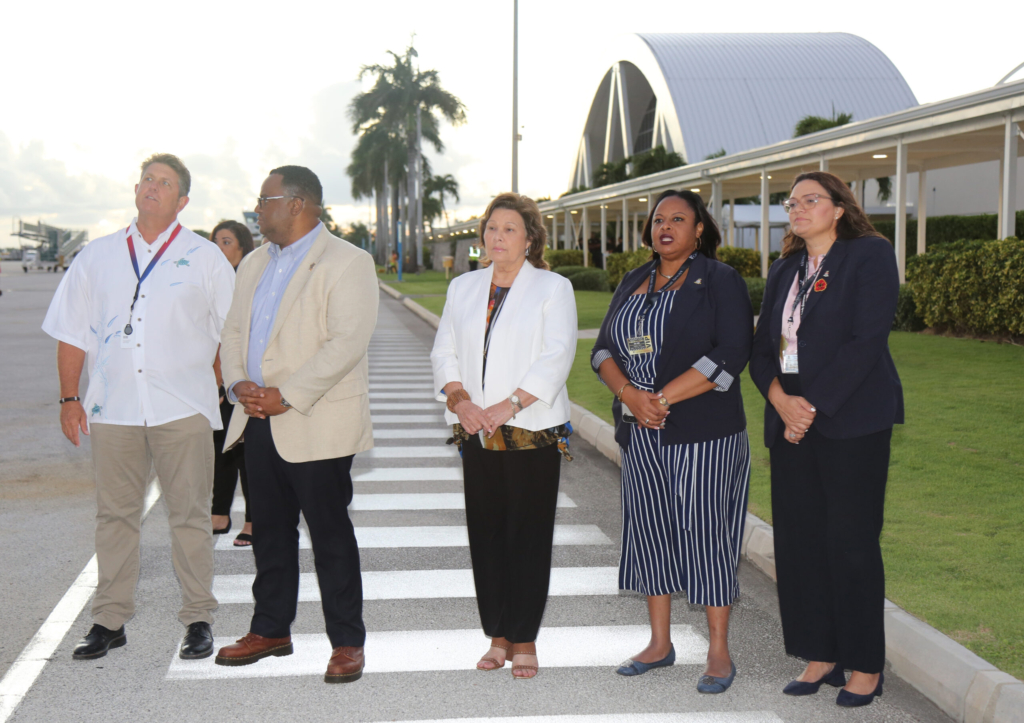 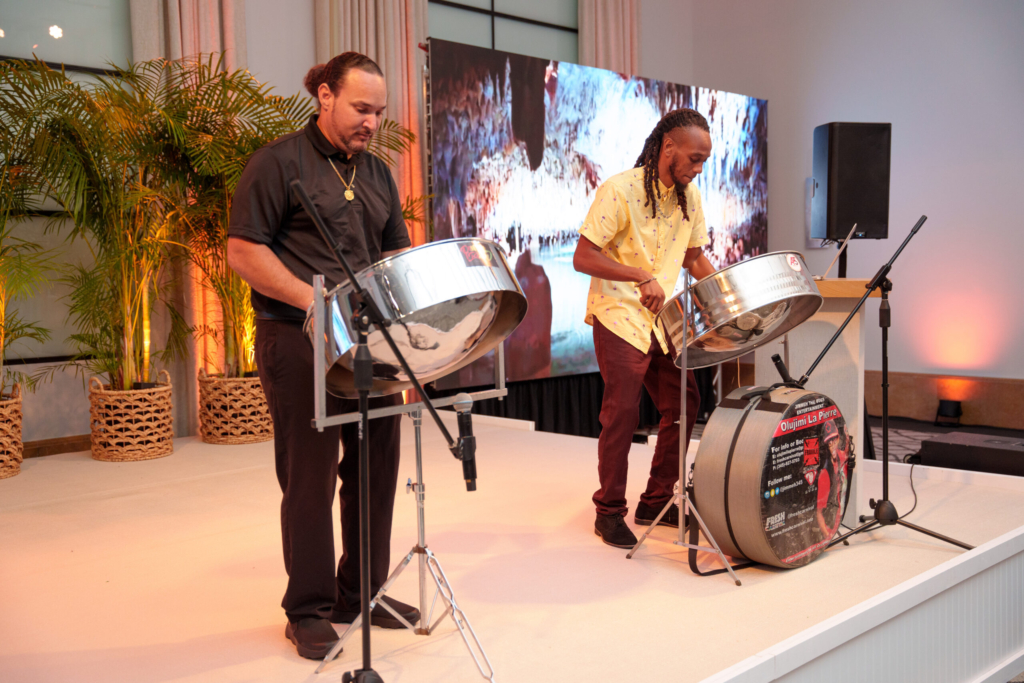 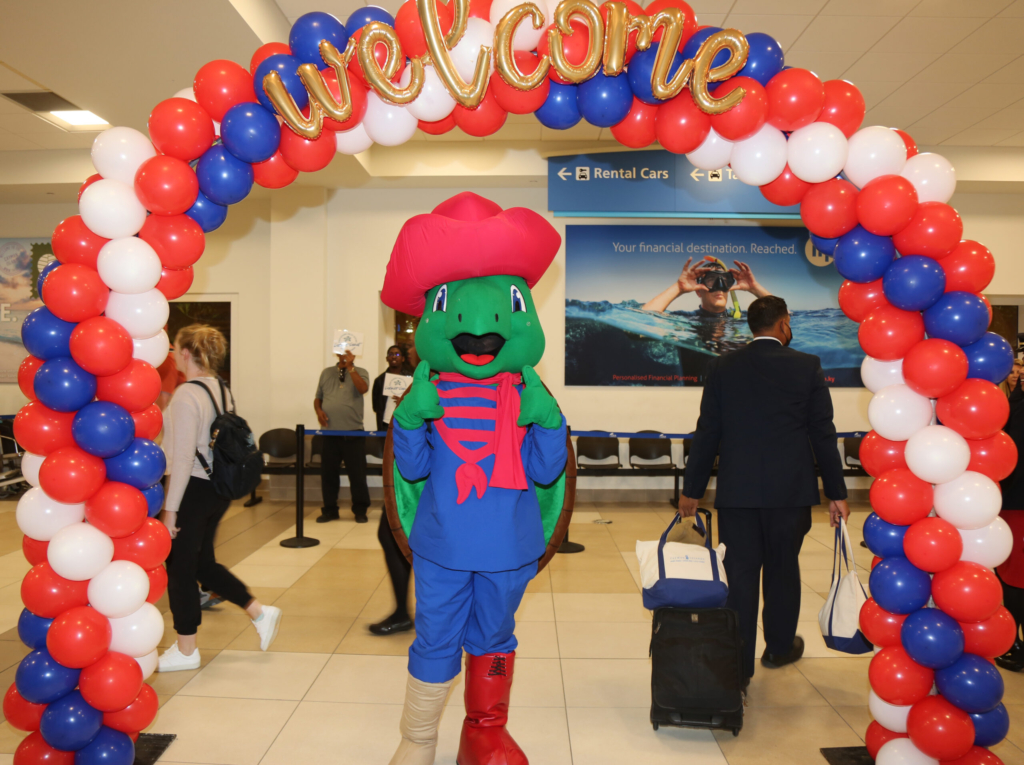 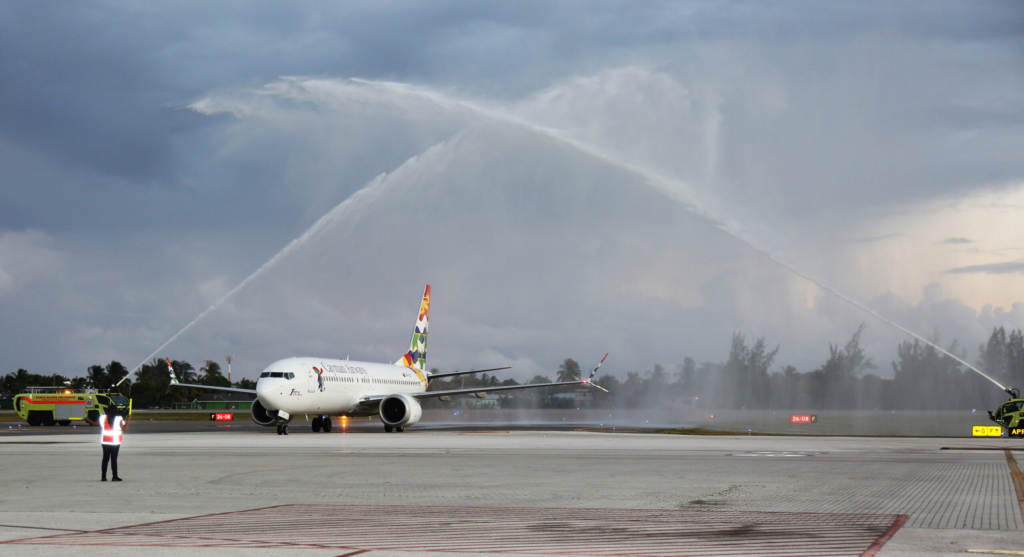 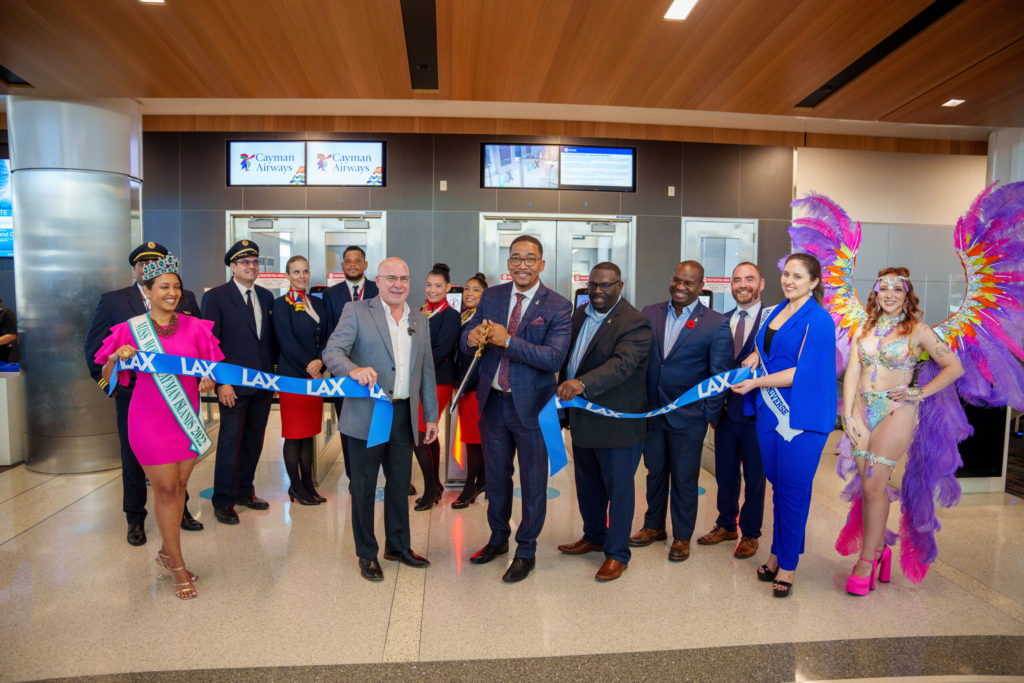 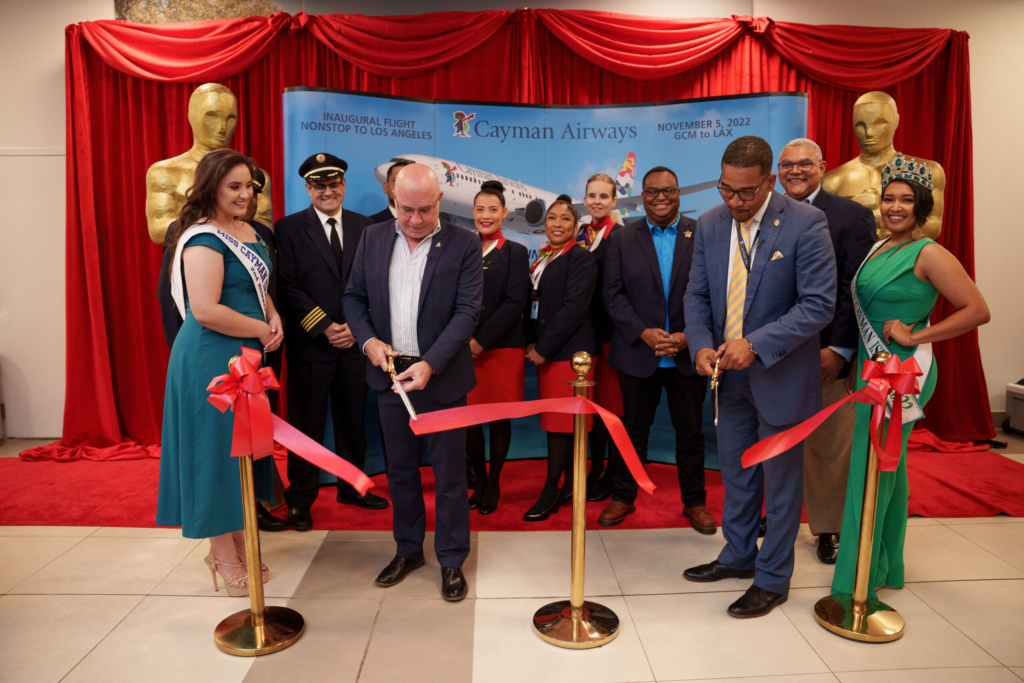 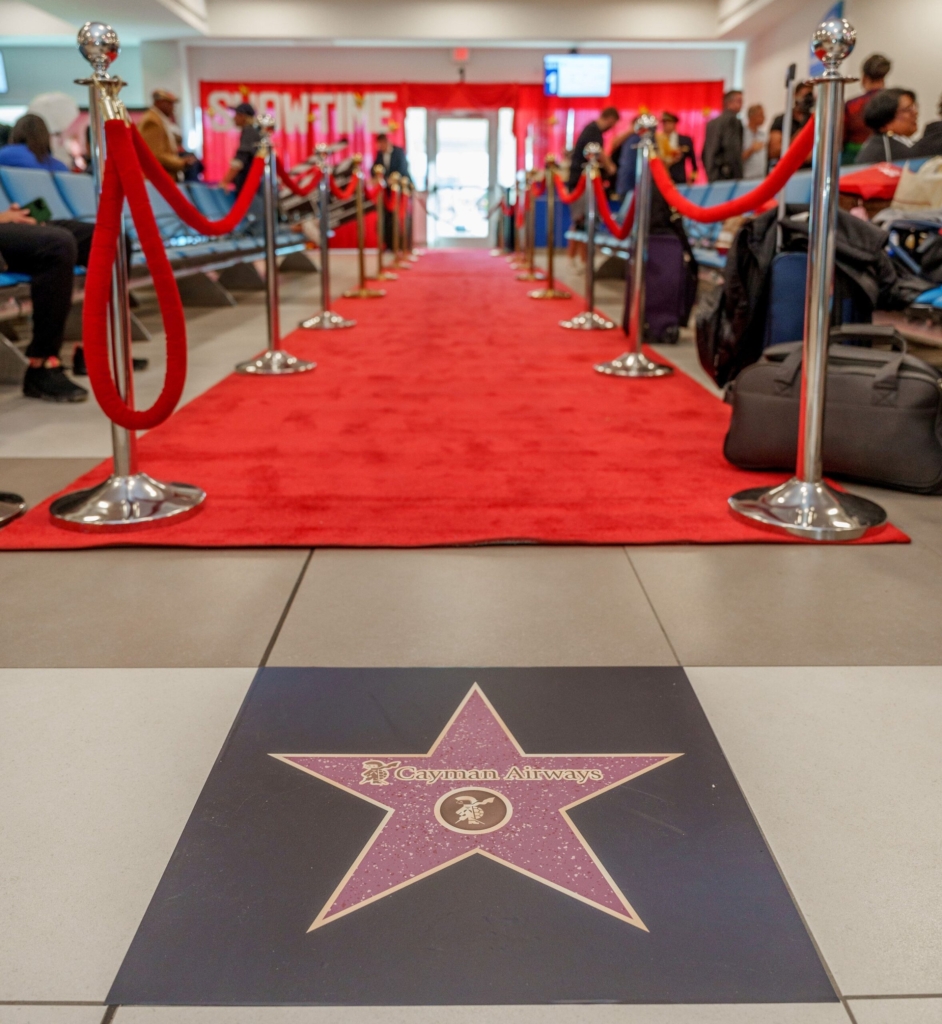 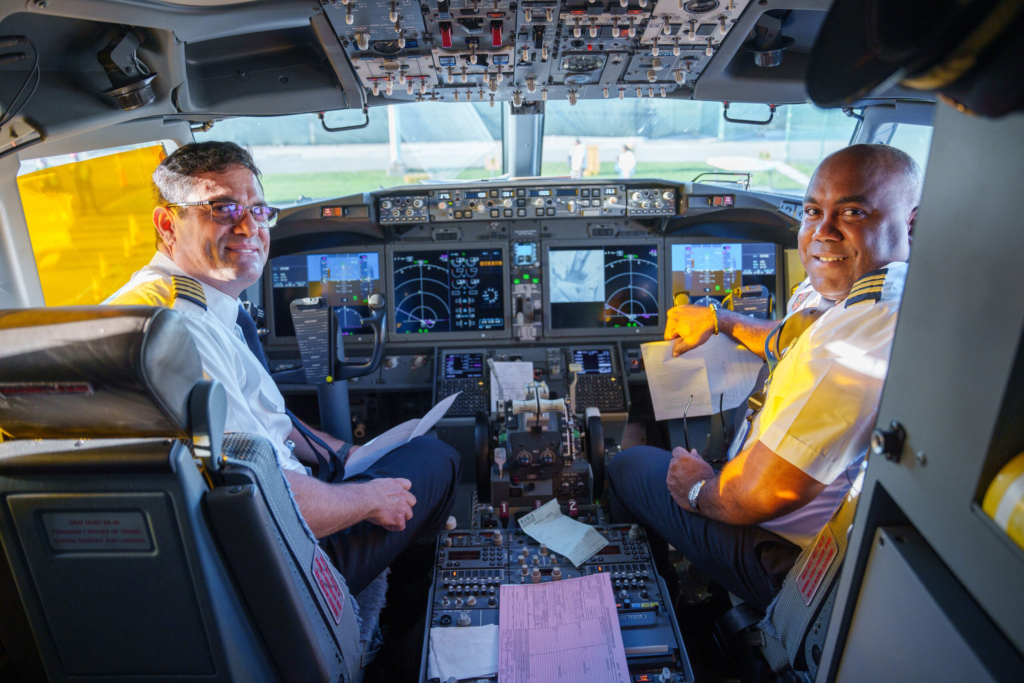 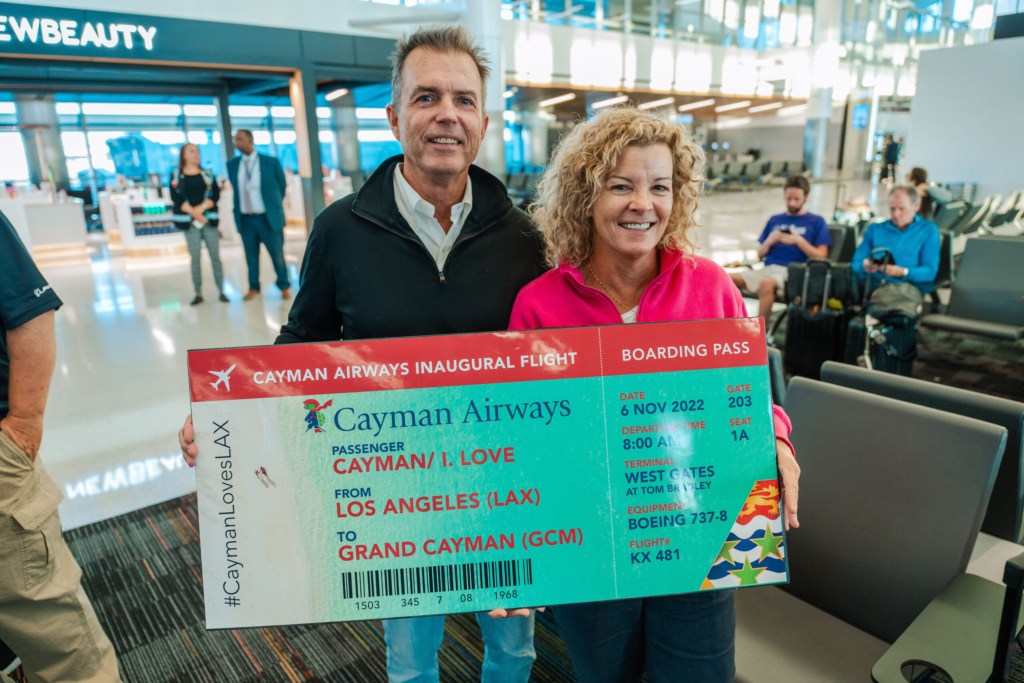 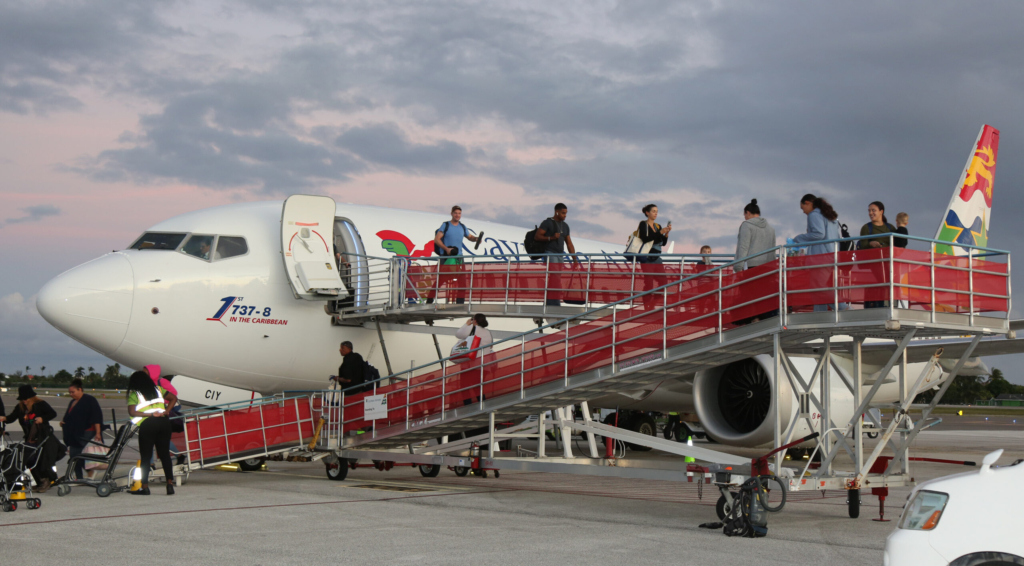 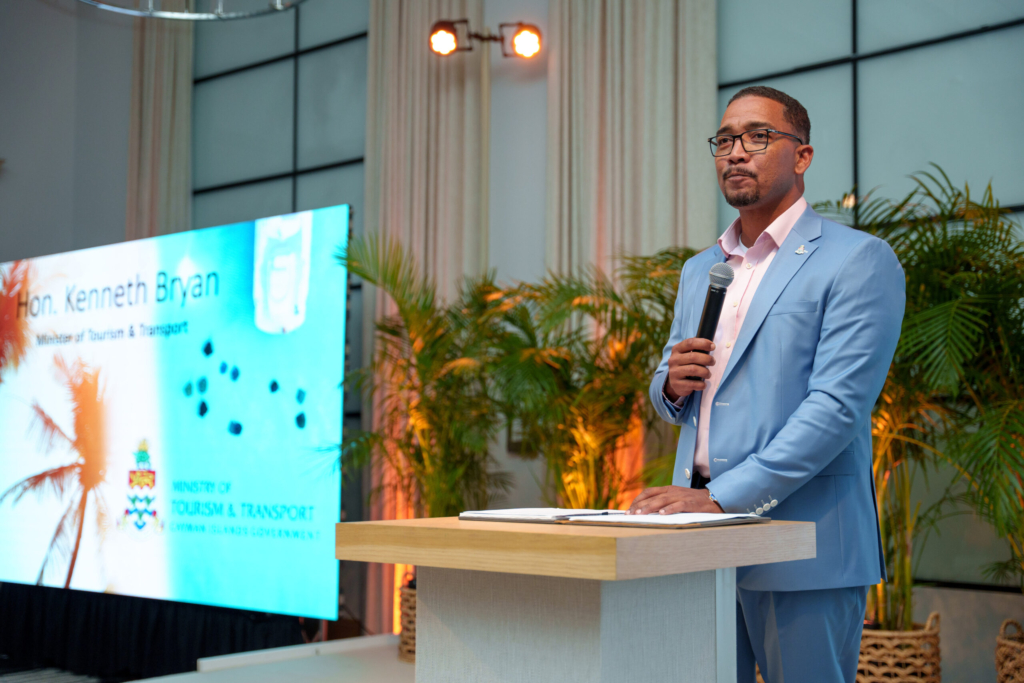 No, thanks.
How do you feel after reading this?
Tags: Cayman Airways Ltd.Los Angeles

(CMR)) Watoya Stewart and Eldon Chisholm are the two newest members of the Ministry of Tourism and Transport (MOTT) team...

(CMR) The number of cruise passengers visiting the Cayman Islands is expected to decline by about 25 percent over the...

Taste of Cayman returns next year

(CMR) After a COVID-enforced hiatus, the Cayman Islands Tourism Association (CITA) has announced that Taste of Cayman will be held...

US tells citizens to reconsider travel to Cayman

(CMR) The Cayman Islands was listed among ten countries that the United States has placed under its new "Level 3"...