The ’32 Storm book which was compiled and edited by Heather R. McLaughlin, illustrated by Nancy Kirkaldy Bernard, and published by the Cayman Islands National Archive.

(CMR) Today, 8 November, marks the 90th anniversary of the 1932 Cuba Storm, which devastated all three Cayman Islands, but especially Cayman Brac. The hurricane of 1932 is still considered by many the worst natural disaster in living memory for the Cayman Islands.

The Cayman Islands National Archive (CINA) has various documentation of this terrifying storm that has been put together over the year. Here is a recollection of the storm as presented by CINA:

The accounts of this three-day, 52-hour ordeal, have been well documented and reverently remembered on significant anniversaries. On the 60th anniversary in 1992, the seminal book on the subject, The ’32 Storm (compiled and edited by the late Heather R. McLaughlin), was published.  Based on accounts from the National Archive’s Oral History Programme, the book tells firsthand the story of what took place as recounted by survivors. Additionally, it includes official documents such as reports, telegrams and letters, plus songs and poems about the hurricane. On the 80th anniversary (2012), a series of events were held across Cayman Brac to commemorate the event.

The Oral History records are multi-faceted and cover various aspects of this late-season hurricane that brought havoc to Cayman Brac. There is no doubt this was a pivotal event that had a long-lasting effect on the people of the Cayman Islands. So much so, that many who lived through it, marked time from that point on as, ‘before’ or ‘after’ the ’32 Storm.

The immediate impact that Brac residents had to deal with was the tremendous loss of life, homes, and property. Sadly, accounting for lives lost stretched on for many months and even into the following year.  In several houses, up to 19 people perished and had to be buried in mass grave sites. Despite this immense loss and grief, these stoic islanders got down to the business of assessing the damage and started re-building as soon as conditions improved, and supplies arrived on the Island. In the words of Carvel (Sonny) McLean, who was 18 years old at the time of the storm, “After ’32 hurricane, everything changed in these islands, even the people, I think.” He was strongly of the view that the storm had long-reaching effects and most of those interviewed agreed. 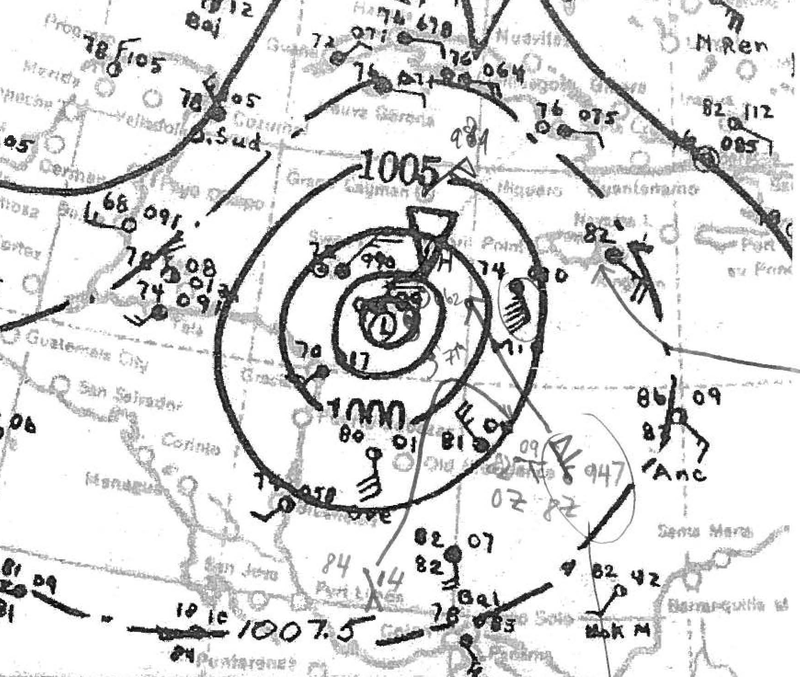 Over the years, the focus has often been on the tangible devastating impacts of the hurricane, such as loss of life and homes, etc. In this article, we will try to cast a light on some of the heartening consequences mentioned by the oral history narrators who remembered how the testing and trauma made the community and individuals stronger.  Capt. Keith Tibbetts words best express this sentiment “Well, it’s pretty hard to explain, but…when a person survives an ordeal like that, all you can do is look to the Lord for help.  That’s what everybody felt.  And I tell you that…I’ve often said Cayman Brackers is the most determined people in the world.  They didn’t pack it in.”

There is a phrase that states, ‘we don’t heal in isolation, but in community. Indeed, there is much evidence that this event became a character-shaping catalyst for survivors as they worked together to rebuild their island home.

The Captain of the last relief ship to reach Cayman Brac, the H.M.S. Dragon out of Bermuda, made this report: “All who have come in contact with them have been much struck by their fortitude, courage, and cheerfulness displayed by the inhabitants, many of whom have seen their homes and belongings completely washed away.  This Island [Cayman Brac] has been reduced to a desert.  The road is a slope of loose coral, not a tree carries a leaf, the cultivated land is salted, many boats have been lost, of twenty motor cars one remains, and about 70 people have been killed.”

We would later learn that the final death toll was actually 117, out of a total population of 1,200, after accounting for those lost on the cays and in Cuba as the storm moved north. Crew from the Dragon traversed the length of the Island cleaning out cisterns and filling them with water from its stores on board the ship. A Royal Mail steamer, the Lock Katherine (an Elders and Fyffes vessel), quickly organized relief efforts in Jamaica and sailed to Cayman Brac carrying blankets, food supplies, a medical doctor  (Dr. Murray), and anything else they could get. On board were also several concerned Cayman Brackers, such as Mr. Arnold ‘Cappie’ Foster and his brother who lived in Jamaica at the time, who were eager to assess the damage first-hand and render any assistance they could give.

The CIMBOCO, Cayman’s trusty mail ship, was also at anchor in Kingston harbor when its captain, Ashlan Foster, got news of the devastating impact of the storm on Cayman Brac.  He immediately contacted the crew and passengers and set sail at 7 am the following morning.  He arrived at the Brac by 5 pm the following day.  In his words, “[The land] was the ugliest thing you ever saw in your life.  No homes left standing, all the trees lying across the soil, coconut trees… one coconut on top the other, at least 50% if the sand washed away, [leaving]bare rocks…’ Although he did not have much groceries on board for Cayman Brac, he made the executive decision to let Mr. Rutty have what was needed to feed the people from the cargo he was carrying to shops in Grand Cayman.   Everything was fully accounted for, with receipts signed by Collector Rutty, and the shop owners in Grand Cayman were supportive of his decision, given these most unusual circumstances.  Within days the Husvic and Nunoca also sailed in from Grand Cayman.

Initially, most people lived temporarily in tents or makeshift shelters using lumber and other material retrieved from the damaged houses.  As lumber and other materials arrived from Grand Cayman, they eventually turned their attention to rebuilding the damaged homes. Below are a few observations captured in interviews that highlight how those who survived supported each other through this difficult season drawing deeply on their faith and confident belief that good comes from every adversity.

-Veronica Smith expressed it this way “Government supplied lumber….and the carpenters would all volunteer to try build one another’s houses because the island was poor, distressed, no money-making. Nobody could go out to work and say they’re going to bring in a paycheck. Everyone had to live in love and unity and help one another get a shelter.”

-Jim Leitch who was 13 years old at the time recalls: “the sense of helping each other and the determination…  [there was] no feeling of despair. …you were so glad to be alive and you were given almost a super-human ability to face the privations at that time and enjoy and laugh about it. There was not a sense of gloom and despair.  [If there was] … I did not pick it up …as a young person.

Leading families responded to the appeal of Government Collector, Mr. Aston Rutty, to put country before self to return and rebuild together.  Capt. Charles Kirkconnell explained that his father (Captain Charlie Kirkconnell) stopped in Cayman Brac. He was actually in Jamaica when the storm hit, returning with his family from Tampa where they had been living for several years. After learning that his home in the Brac was completely destroyed, he intended to call it a day, but in Captain Charles’ words, “Rutty prevailed on him [Captain Charlie].  He said, “Capt. Charlie, all the people from the Brac have just left me, and Cayman Brac can never come back unless we can get some of our people to stay here”. And his persuasive power convinced my dad that he would go back and rebuild.  So that was it.”

-Families such as the Kirkconnell's, Fosters, Scotts, and Tibbetts all responded to Mr. Rutty’s impassioned requests. Many remained or returned to Cayman Brac, establishing businesses in spite of the bleak prospects. They worked over many years with dogged determination to help improve the state of their island home.

A good number went on to become well-known, successful entrepreneurs, community servants, and politicians whose names live on in the history of the Cayman Islands.  Several of those who chose to leave (immediately or later) kept in touch and supportive of their families on the Island and eventually returned, after years away, to help build and contribute to the Island’s progress. These accounts show that, while devastating, the ’32 Storm can also be remembered for the sense of community, resilience, and love for country as demonstrated by our ancestors.

No, thanks.
How do you feel after reading this?
Tags: The 1932 Cuba Storm

(CMR) The number of migrants in the Cayman Islands continues to increase as more migrants are arriving on island. Between...

(CMR) HMS Medway, the Royal Navy ship that has been in the Caribbean for the 2022 Hurricane Season and which...

(CMR) Several persons have reached out to CMR expressing concerns that a convicted sex offender will be the host of...

CMO:  Dengue case no cause for concern