Reports from the RCIPS are that shortly after 12 midnight on Saturday, 5 November, while on patrol, the crew of a Cayman Islands Coast Guard vessel observed a fishing canoe-type vessel approaching the northern coastline of West Bay. Upon seeing the Coast Guard vessel, the canoe-type vessel attempted to evade the officers but was soon stopped and brought under control.

An initial search of the vessel revealed the presence of several large packages containing suspected ganja, totaling over 500lbs. The three men who were aboard the vessel, Jamaican nationals ages 35, 42, and 57, were arrested on suspicion of importation of ganja. 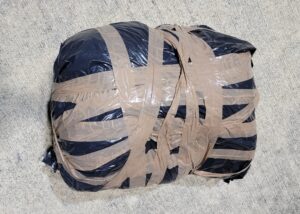 RCIPS officers conducted searches of the shore in the vicinity and discovered a fourth man, age 40 of West Bay, who was in possession of several fuel drums. He was arrested on suspicion of being concerned with the importation of ganja.

All four men have been charged with Being Concerned with the Importation of Ganja and appeared in court yesterday, 7 November. The Jamaican nationals were remanded in custody, while the West Bay man has been granted bail, pending further appearances by all four men on 6 December.

No, thanks.
How do you feel after reading this?
Tags: drug bustdrug importationganja

(CMR) Police said they arrested a 25-year-old West Bay man this afternoon in relation to a robbery at a service...