(CMR) The Miss Cayman Islands Universe Committee made an about-face Tuesday evening after CMR queried why Tiffany Conolly was in Trinidad and Tobago at the Miss World Trinidad and Tobago pageant over the weekend. In what appears to be yet another misstep by the committee, there was no direct explanation given for her travel.

Instead, they have now announced that the 1st runner-up, Chloe Powery-Doxey, has been selected as the alternate to represent the Cayman Islands at the Miss Universe pageant in New Orleans on 14 January 2023. Less than three weeks ago, the committee indicated that they were not yet prepared to pull the plug on Conolly, who faces multiple charges in Summary Court, including assaulting a police officer.

Their lack of a response to a media query has only led some to speculate this is the reason for this latest development. Conolly has previously agreed to keep a low profile and not attend any official events pending the outcome of her trial. However, two days after making that agreement, she did an international interview.

Due to her current case before the court, Conolly has not been able to represent Miss Universe Cayman in an official capacity. Whilst this latest development does not explicitly say that the crown has been taken from her, Conolly took to her IG yet again to share her feelings on the matter. She wasted no time promising more surprising are coming for a pageant year that has been froth with them: 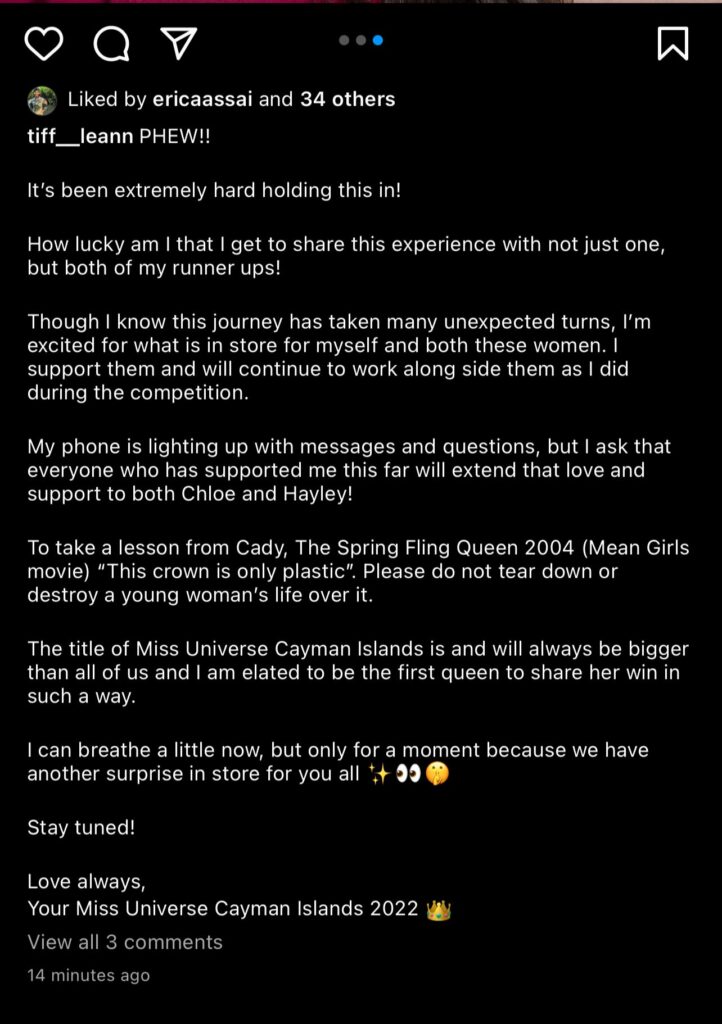 Her inability to keep a low profile may, in the end, have been her undoing. She took to her Instagram page, where she shared videos and images of herself at the Trinidad event. She was photographed in front of the official photo wall and also took videos of the pageant itself and herself wearing a gold sequenced jacket dress. In her customary bold nature, she tagged the winner of the Trinidad and Tobago pageant.

“This was a spectacular event …bravo to all who were involved. To the 17 women who graced the stage; I wish you success in applying the skills I’m sure you’ve attained during your experience,” 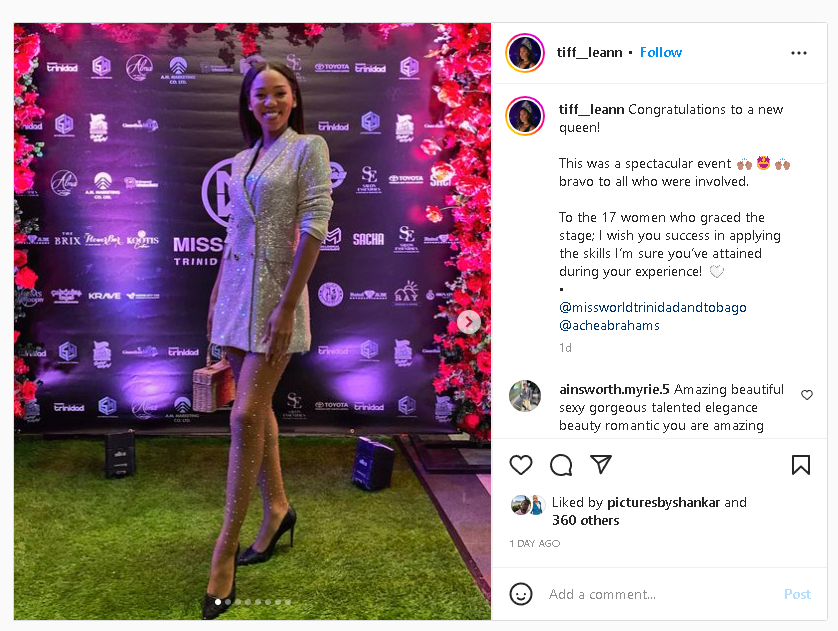 The committee said Miss Powery-Doxey and 2nd runner-up Hayley Grizzel will both continue to be active in the community as alternates for title holder Tiffany Connolly until further notice. However, the committee has other issues that it allegedly is not addressing as it relates to the first runner-up. Tune in tomorrow morning on THE COLD HARD TRUTH for further details.

In their statement, they shared that:

“The Miss Cayman Islands Universe Committee supports Miss Powery-Doxey on her journey to the world stage and wishes her all the best as she represents the Cayman Islands at the international level,”

Meanwhile, scandal-free second runner-up Hayley Nicole Grizzel went to Los Angeles over the weekend to represent the Cayman Islands for the national airline's first inaugural flight into the City of Angels. It was revealed that the first runner-up was not inoculated against the coronavirus.

Miss Maracas Valley, Aché Abrahams, was crowned Miss World Trinidad and Tobago 2022 in a glittering competition held on Sunday, November 6, at the National Academy for the Performing Arts (NAPA), Port of Spain.

The 23-year-old creative artist, a mental health advocate, and social activist residing in Cantaro, Santa Cruz, beat 16 other finalists to win the national title. She succeeds last year's winner Jeanine Brandt and will now prepare to represent her country at the 71st Miss World pageant.

No, thanks.
How do you feel after reading this?
Tags: Chloe Powery-DoxeyMiss UniverseTiffany Conolly

(CMR) Several fight videos have been making the social media rounds from over the weekend, showing women engaging in physical...