(CMR) The National Conservation Council (NCC) is seeking public comments on a draft Species Conservation Plan to protect six species of native nesting seabirds across the Cayman Islands before submitting the plan to Cabinet for approval. The consultation period is now open until November 4, 2022. Some of the birds are now on the verge of local extinction.

Of the Brown Booby, Red-footed Booby, Magnificent Frigatebird (Man o’ War), White-tailed Tropicbird (Bo’sun bird), Least Tern and Bridled Tern, most populations in Cayman have experienced significant declines in the last century, and for several of these species, local extinction is imminent.

There are no new proposed restrictions on “take” as these bird species are each fully protected under the National Conservation Act. However, their nesting habitats remain at continued risk from threats of development, human traffic and invasive predators. 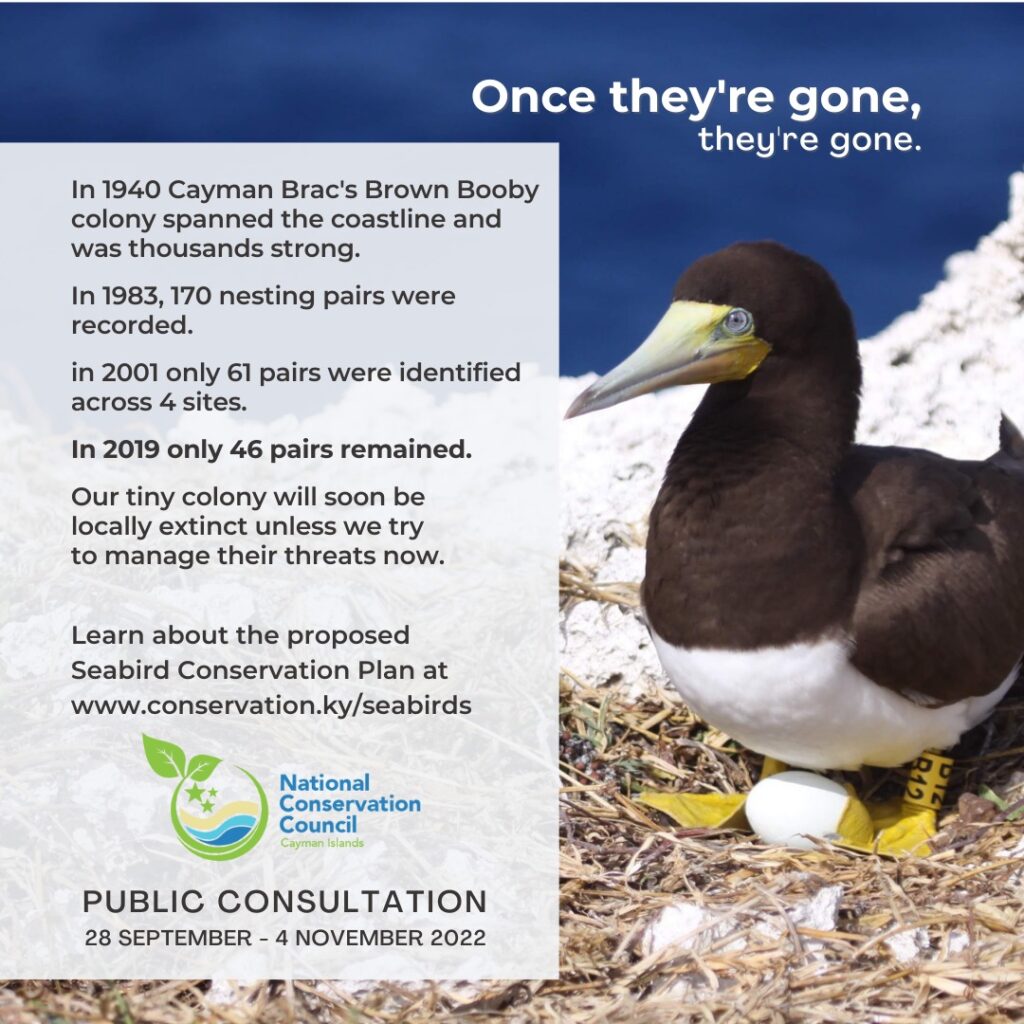 The Conservation Plan, therefore, aims to designate critical habitats for the most densely populated, unprotected nesting sites and to provide appropriate protections to mitigate disturbance from human and animal activity.

In 2001, Cayman Brac residents Tennson Scott and Temple Tatum relayed information from their late grandfather Mr. Ballinger Christian who described the Brown Booby colony in Cayman Brac with “thousands of birds” in the early 20th century.

As documented by Patricia Bradley in her report “Management Plan to conserve and sustain the brown booby colony and its habitat on Cayman Brac, 2002-06” T. Tatum told Bradley that, “in the 1930s and 40s, his mother regularly collected eggs with friends at Long Beach on the Ironshore and among low rocks below the bluff. Both men commented on the large number and size of the flocks of brown boobies around the coasts into the 1970s, although D.W. Johnston observed fewer birds in summer 1970 than in 1966.”

Cayman now has less than 100 Brown Boobies nesting in the Brac. We could lose them entirely if we don’t manage their threats now. The Department of Environment is now asking if the public is willing to let our Brown Boobies disappear?

Visit www.conservation.ky/seabirds to have your say in the public consultation period which begins today, 28 September and ends on 4 November 2022. People can also visit the Department of Environment offices at 580 North Sound Road, George Town. Comments on the proposal may be emailed to [email protected], received at the DoE offices, or mailed to PO Box 10202, Grand Cayman, KY1-1002.

No, thanks.
How do you feel after reading this?
Tags: Cayman birdsCayman BracDoE

(CMR) Cayman's annual lobster season, which runs from December to February 28, starts today. However, people are being reminded that...

Department of Environment trying to locate shark in distress

(CMR) The Department of Environment is trying to locate a Nurse shark believed to be in distress after it became...

(CMR) Blue Iguana Conservation (BIC), managed by the National Trust for the Cayman Islands  (NTCI), has launched a mobile app...

(CMR) The Department of Environment has confirmed that a video of seine net fishing, posted by CMR, was taken in...

(CMR) The National Trust for the Cayman Islands has purchased a new parcel of primary Mastic forest to add to...

(CMR) The Department of Environment said in preparation for Hurricane Ian, its Turtle Team carried out 37 turtle nest excavations,...