(CMR) Several persons have reached out to CMR expressing concerns that a convicted sex offender will be the host of a concert in the Cayman Islands next month. Flyers that were in circulation showed that he is on the ticket to perform with Jamaican artiste Spice at her Tape Measure show on October 21.

Actor Lacell Parnell, popularly known as ‘Girlie' or ‘Mr. Handsome' was convicted for several sexual offenses in the United States in 2009.

He was found guilty of forcible touching, sexual abuse, endangering the welfare of a child, and aggravated harassment in the second degree. The charges were in relation to a 13-year-old boy. He appealed the convictions but was unsuccessful.

Parnell, in a 2021 interview with The Star, said that he was innocent of the charges, which led to him being listed as a sex offender in the USA and later deported to Jamaica.

“If I was guilty of those charges, I wouldn't be talking to you today. I would have spent years in prison. When I came back to Jamaica, it didn't take me long to obtain a visa and go to England. And when you do that, they go and search every corner for information on you,” he told The Star.

The actor told The Star that he was the subject of much ridicule following his deportation to Jamaica. 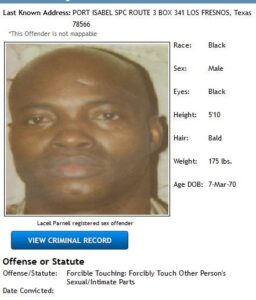 The actor said he feels hurt that the claims that landed him on the list of registered sex offenders in the USA are constantly used to judge him.

In a recent Facebook live video, dancehall artiste Mr. Vegas questioned fellow dancehall artiste Spice's decision to perform at an event where Parnell will be the host. The event is being put on by Start di Fun Ent.

(CMR) The number of migrants in the Cayman Islands continues to increase as more migrants are arriving on island. Between...

(CMR) Today, 8 November, marks the 90th anniversary of the 1932 Cuba Storm, which devastated all three Cayman Islands, but...

(CMR) HMS Medway, the Royal Navy ship that has been in the Caribbean for the 2022 Hurricane Season and which...