(CMR) The Miss Cayman Islands Universe Committee has confirmed that no action will be taken against the reigning queen Ms. Tiffanny Conolly at this time. Over a month ago, they claimed that they were on a fact-finding mission and seeking legal advice. However, they are now confirming she will be keeping all of the awarded prizes, including her $70,000 three-year scholarship.

Despite her not being allowed to work at the Department of Tourism, she will be receiving a stipend in lieu of salary until further notice.

Responding to media queries from CMR in a brief follow-up statement, the committee did not reveal what their investigations found or the outcome of the legal advice sought. Instead, they now state they will await the outcome of her criminal assault case before any further action will be taken. Despite also claiming that she will not be making any appearances or giving interviews, Conolly recently participated in an interview and also confirmed that she would be working on recording a “small autobiography video” on the details of her story.

CMR sources shared that she had agreed to no public appearances until the matter was fully resolved just two days before doing the Instagram interview with Luis Alfonso Borrego. Once again, there were no repercussions for either her or the committee for the breached agreement.

Borrego said he was afraid of the controversy surrounding her and Miss Russia this year. Unphased by the controversy, Conolly told him not to believe the media:

“We all know not to always believe the media.”

She goes on to contradictorily say that “there's truth in everything.” At one point, she did blame her absentee father, Noel Conolly, for her relationship issues with men stating that she has been abused in all ways and never had him around.

Even Borrego wondered if her crown was ever in jeopardy of being taken from her, and she stated that it was never a concern. During the interview, 24-year-old Conolly claimed that the matter would be “resolved in two weeks.” No resolution has been reached yet, and her trial is scheduled for October 17 and could potentially drag on for months before its conclusion.

In a firm stand that it is business as usual, she has also been shopping for pageant clothes and doing photo shoots.

The question remains whether or not she will be participating as a contestant in the Miss Universe International pageant. The committee has said that they will be waiting to see the outcome of the criminal charges against her. Ironically, the Miss Universe website has not updated the page for the Cayman Islands, with former winner Georgina Kerford still listed as the reigning Miss Cayman Islands Universe.

CMR's investigations revealed that Conolly has not been able to take up her post at the Department of Tourism primarily because civil servants or contracted workers are ordinarily placed on immediate suspension when they are arrested for criminal offenses. Her former employer and pageant sponsor, Island Natural, has since parted ways with the beauty queen. Sources indicate they had also not been made aware of her pending trial. She has removed them from her LinkedIn profile.

She initially updated her LinkedIn account to indicate she was working at DOT but has since removed that post. 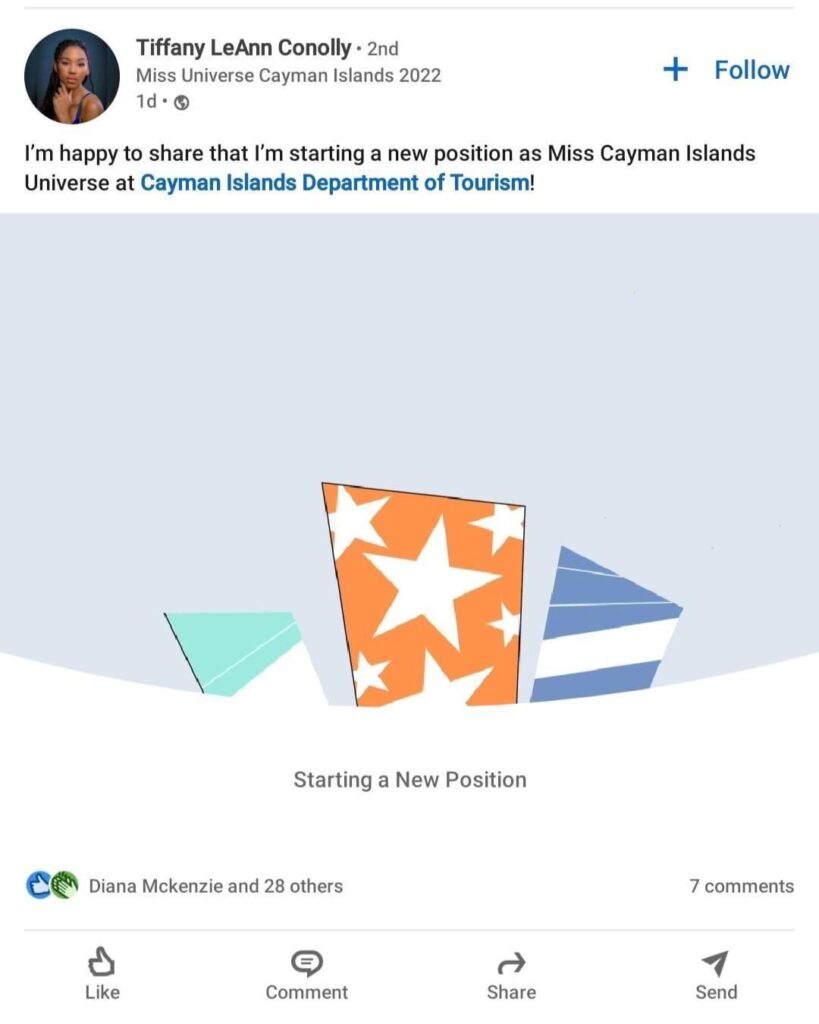 The MCUC has not shared if they are changing any of the entry criteria for their pageant. The Ministry of Tourism and Transport has made no indication that it would be removing the committee or making any changes as a result of this internationally embarrassing incident. Many are still waiting on Minister Bryan to make his promised statement on what he called a delicate situation.

Miss Universe 2022 will be the 71st Miss Universe pageant, to be held in January 2023 in San Jose, Costa Rica.