(CMR) One man was killed, and 20 others had to be rescued when Tropical storm Fiona hit the French Caribbean island of Guadeloupe on Friday. Over 13,000 households were left without power.

Tropical Fiona was located 130 miles (210 kilometers) southeast of St. Croix Saturday morning with maximum sustained winds of 95 kph. It was moving west at 13 kph on a path forecast to pass near or over Puerto Rico on Sunday night. 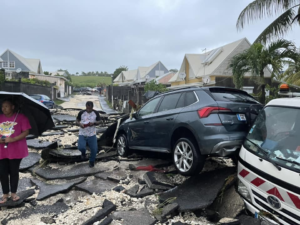 Fiona is expected to become a hurricane while moving near Puerto Rico on Saturday, threatening to dump up to 20 inches of rain.

“The center of Fiona is expected to move near or south of the Virgin Islands (Saturday) evening, approach Puerto Rico Saturday night, and move near or over Puerto Rico Sunday night before moving near the Dominican Republic on Monday, the hurricane center said.

Puerto Ricans are worried about severe power outages since the reconstruction of the island’s power grid damaged by Hurricane Maria in 2017 only recently began. Reports are that the grid remains fragile, and power outages occur daily.

The National Hurricane Center said that Hurricane watches are in effect for the US Virgin Islands and parts of the Dominican Republic.

No, thanks.
How do you feel after reading this?
Tags: Tropical Storm Fiona