“I have never been more scared in all of my life when we discovered what we discovered .. you have a representative that will not only hear your pleas but will definitely act”

(CMR) A vehicular fire on Mangrove Avenue in Prospect Wednesday evening has raised the alarm about the dangers of make-shift garages operating illegally in residential areas. A near disaster was averted out of sheer luck but the incident has caused several, including DEH and OfReg, to take immediate action.

Garfield Wayne Ellis, the owner of the property, has at least 4 different business licenses, which are supposedly located at a warehouse on Kingbird Street. However, he has been operating off this residential property now for years, seemingly oblivious to any laws regulating his activities.

His property includes equipment and material from construction and heavy equipment operations in plain sight, as well as shipping containers. 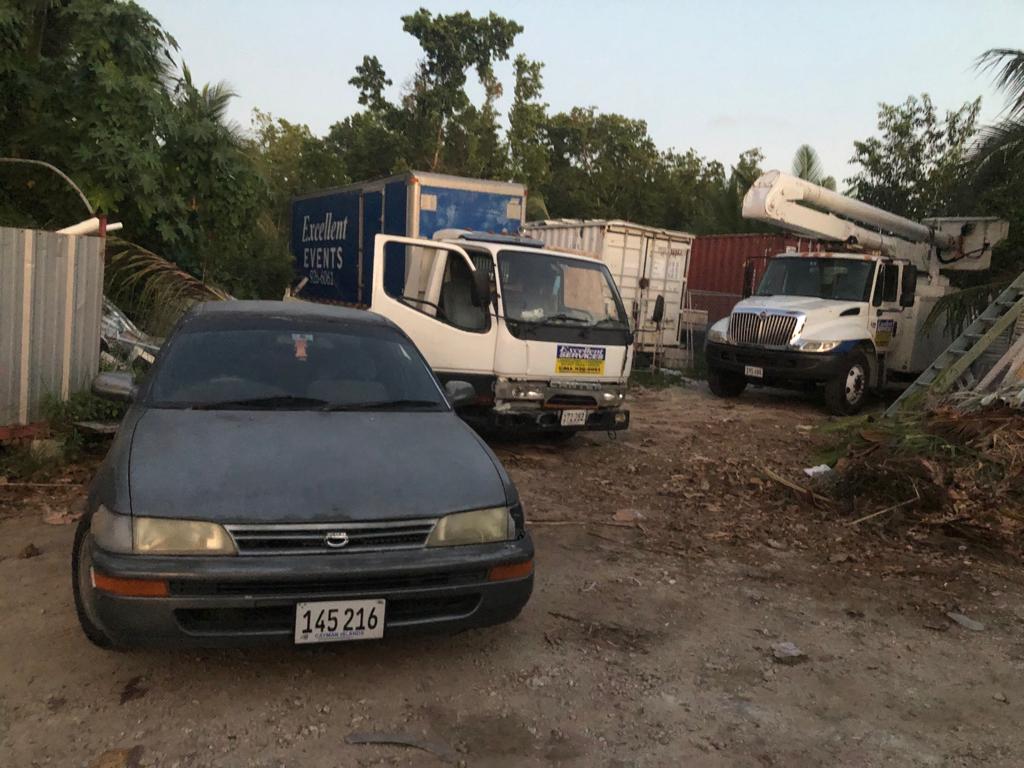 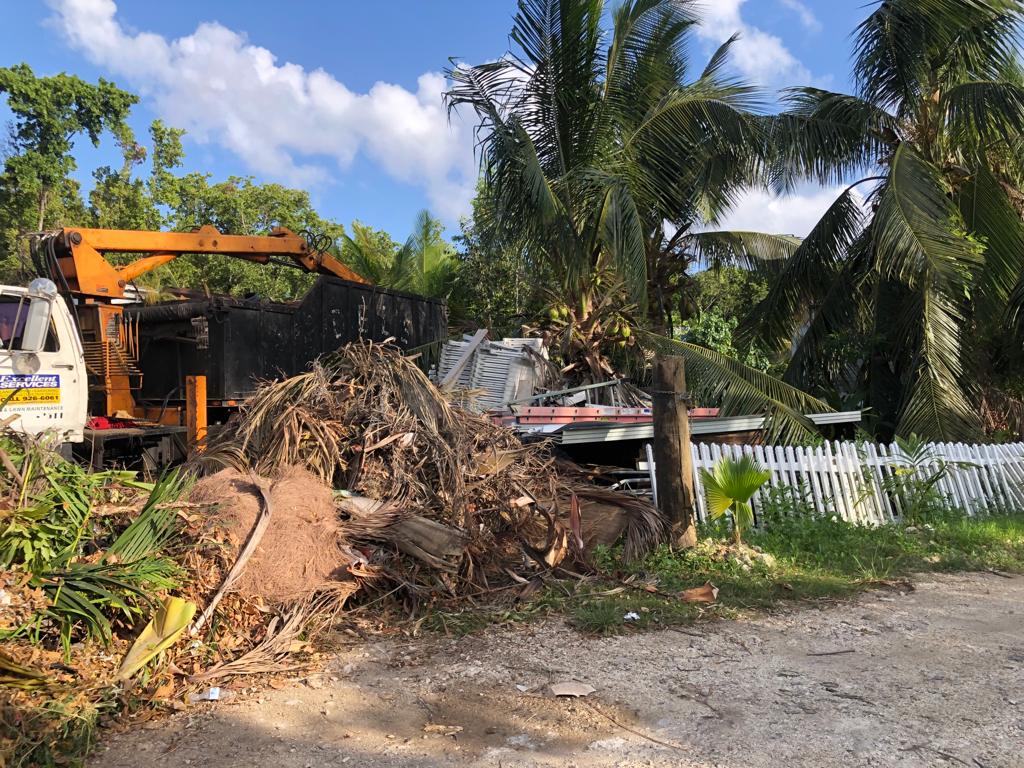 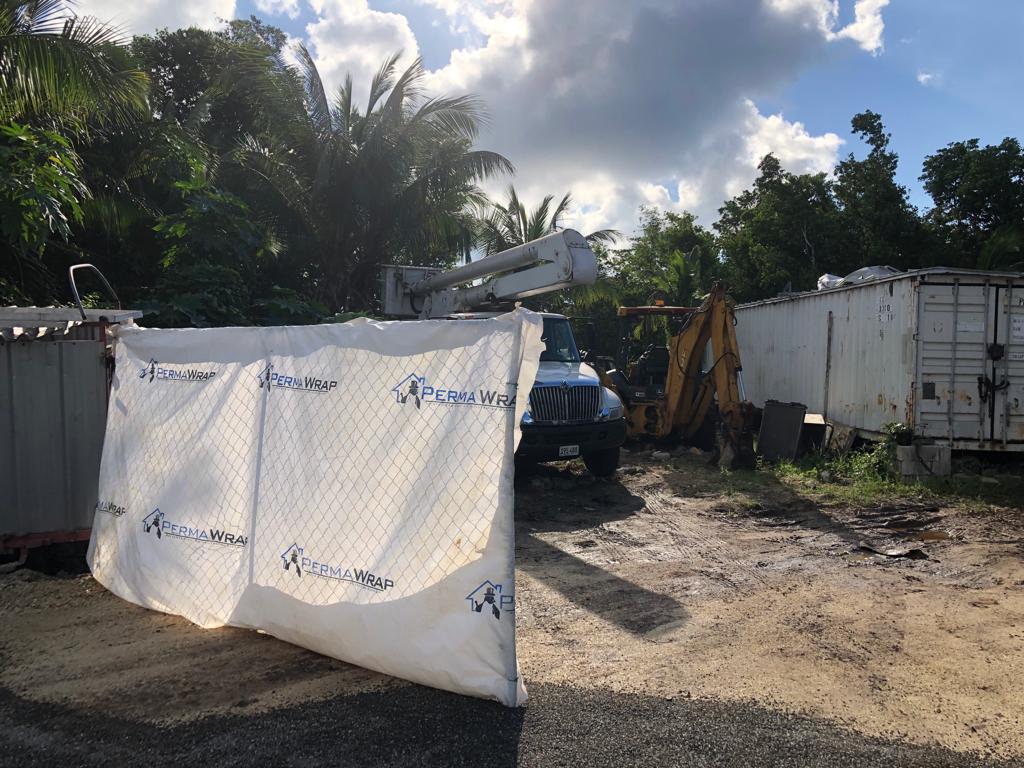 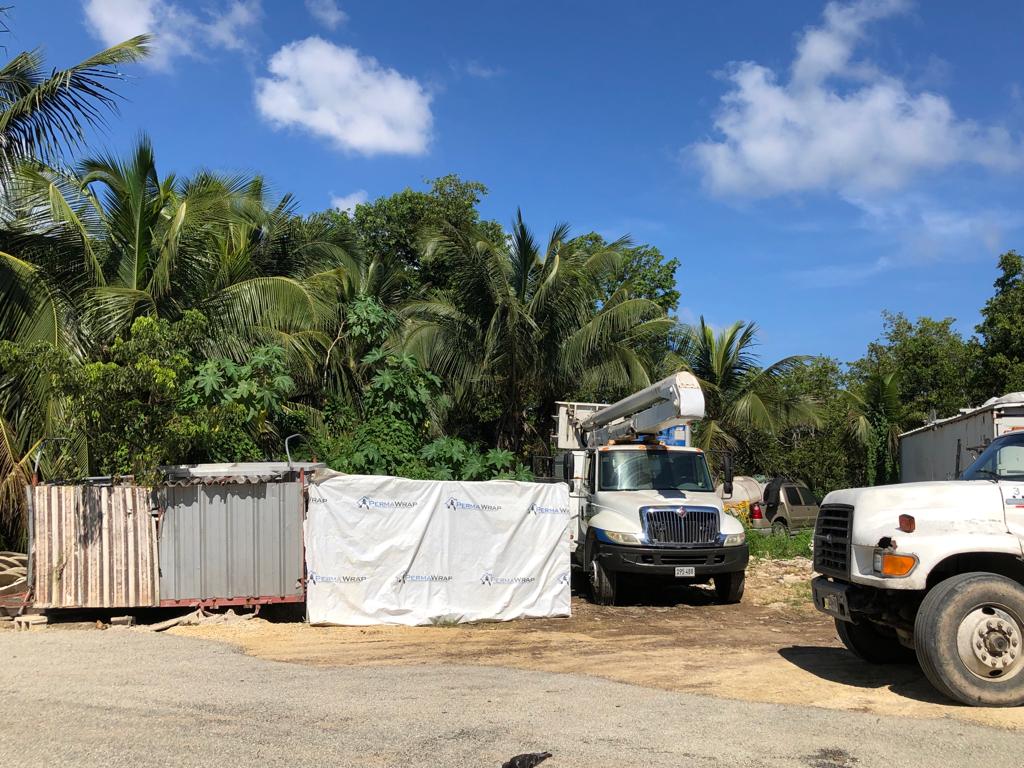 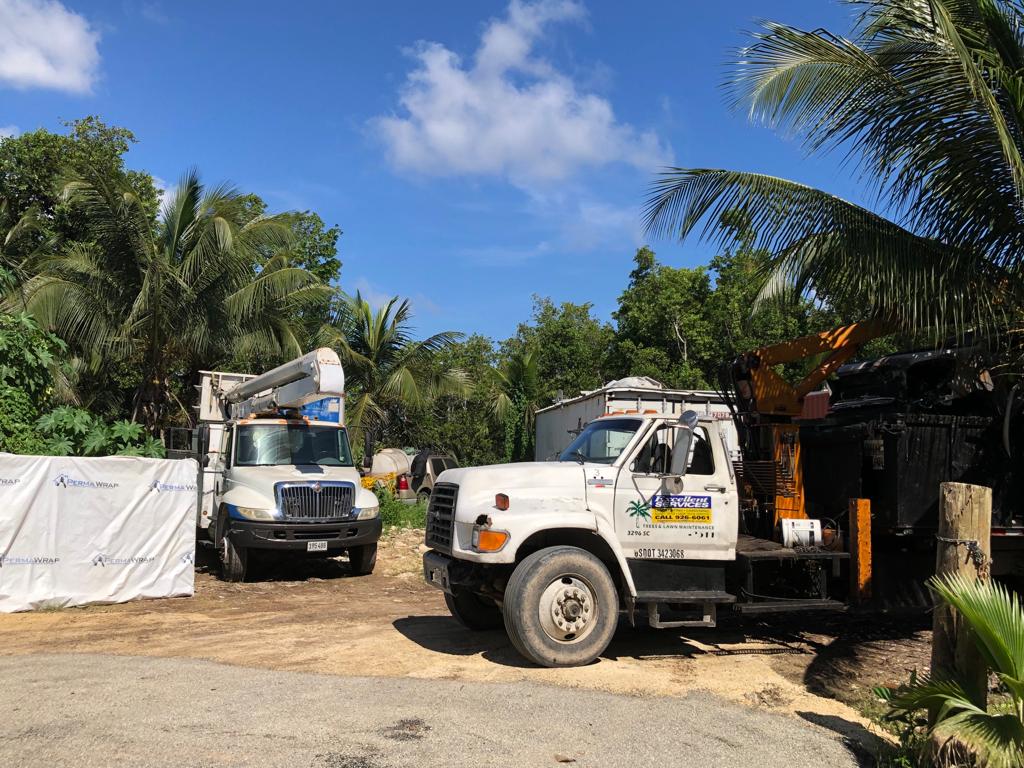 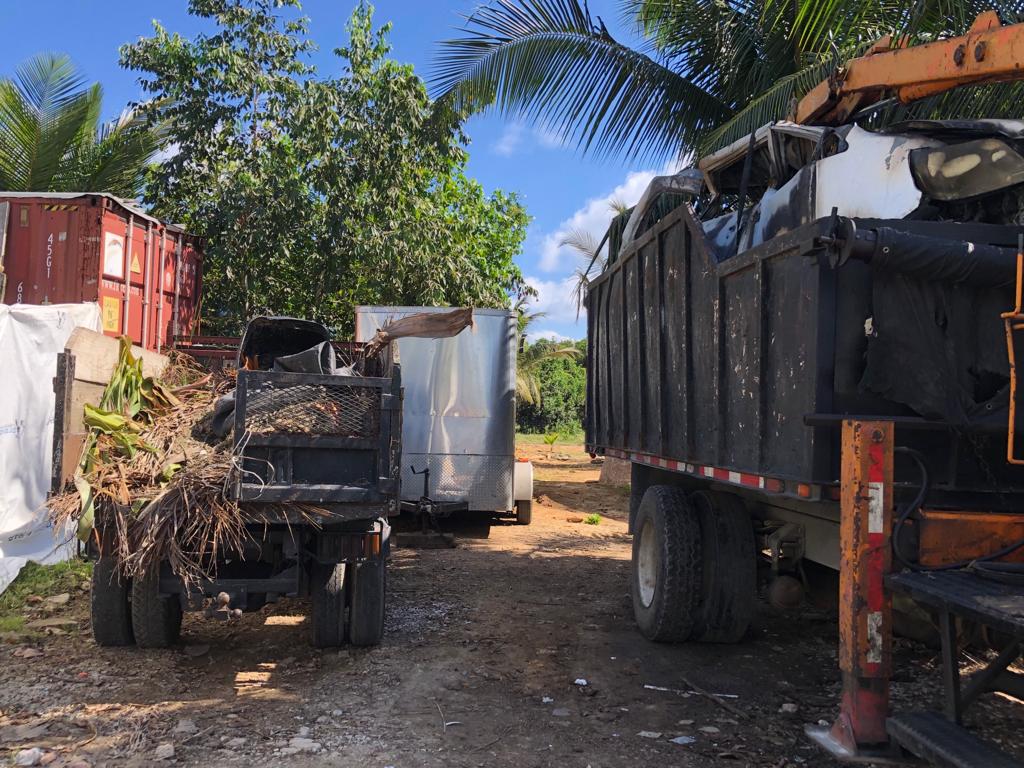 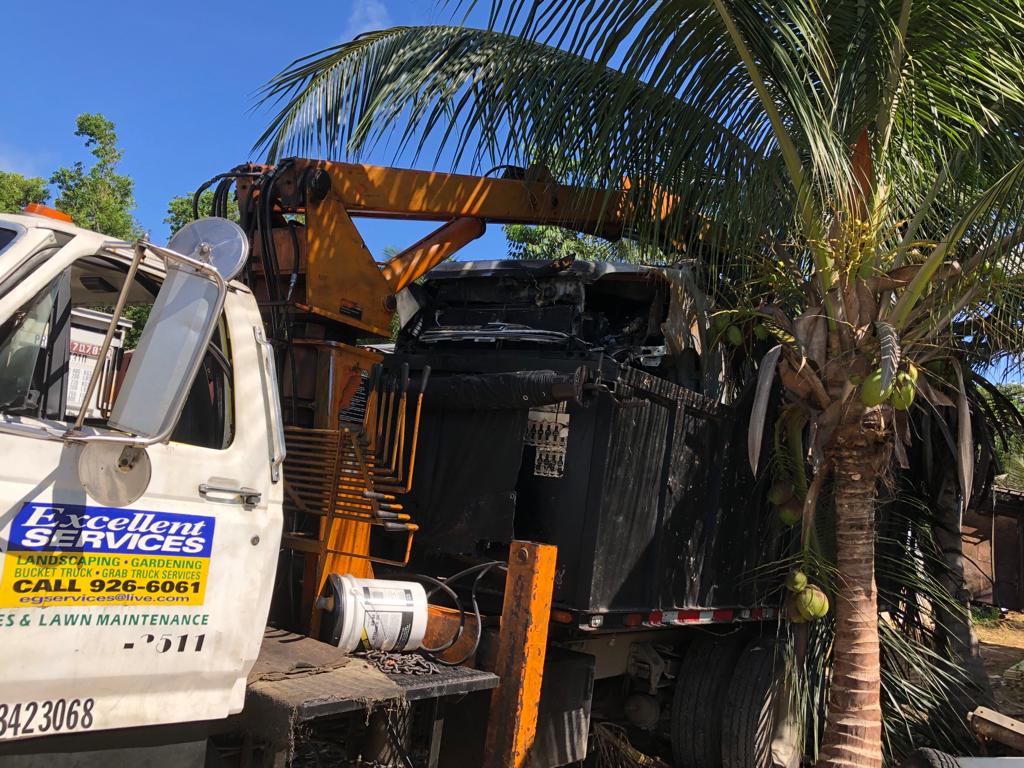 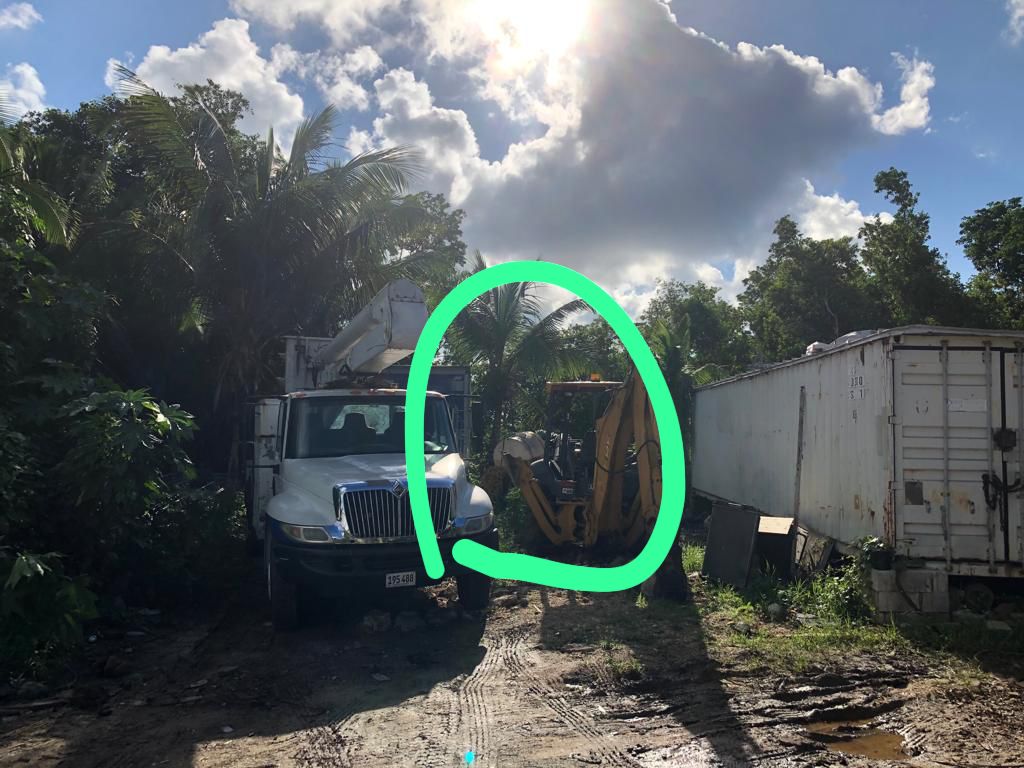 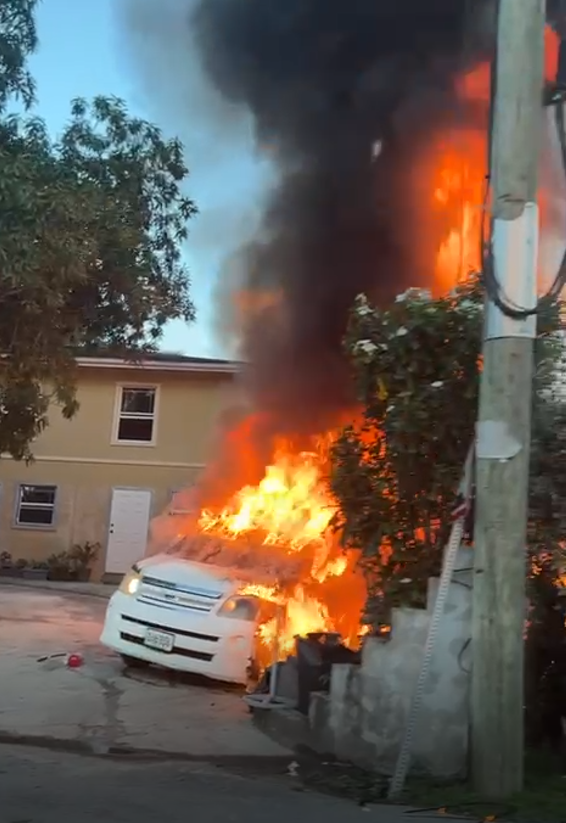 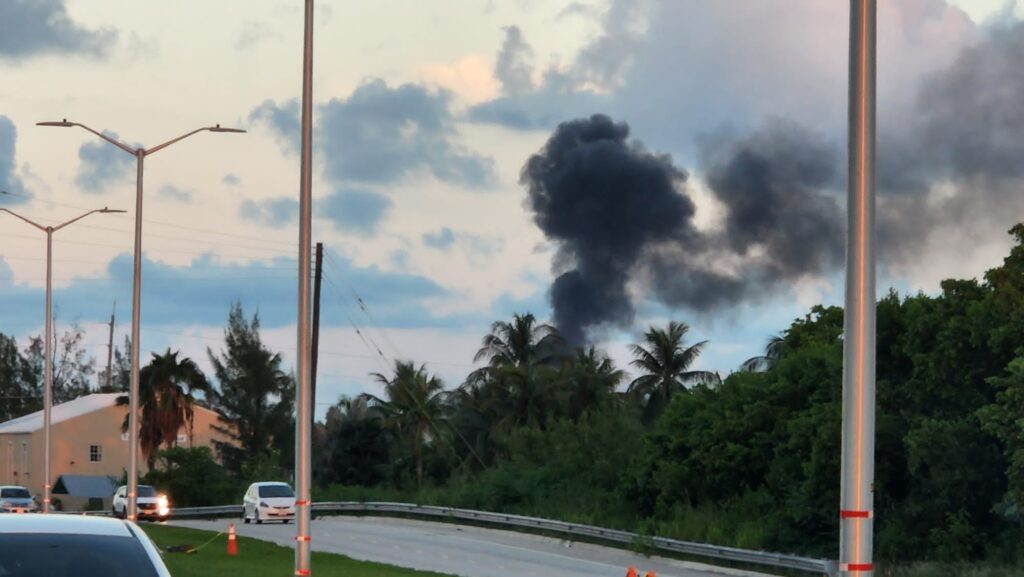 Both residents and the MP for Prospect have shared that this fire could have been far worse as it endangered both property and lives.

The community has been begging officials to curtail this particular site since 2019. CMR has seen evidence of written complaints from August 2021 to the Department of Commerce and Investment (DCI). The residents share that they received no assistance with curtailing illegal operations.

Complainants shared that when they reached out to DCI about the matter, they were made to feel that they were the problem and no one was seeing the obvious risk. They shared:

“For too long, it was ignored and I was scared the life lost was almost happening here last week.”

Residents provided emails to CMR sent to local officials complaining about illegal operations, fuel storage, trespassing on private property, as well as the potential ciphering of electricity with a wire hanging over other properties.

The vehicular fire began after 6:15 pm, and quickly engulfed the van, with black smoke trailing in the skies for miles. Fires sparks were observed flaming above the housetops. Many people that contacted CMR believe that a house was on fire.

The fire was brought under control by the combined efforts of the Cayman Islands Fire Service and RCIPS personnel.

MP Sabrina Turner shared the details of the hazardous fire that engulfed a work van at her community meeting on Thursday evening. She noted that it was caused by a 55-gallon gasoline drum that was being “siphoned out of a container and then loaded into a car that ignited”.

She shared that the fire officers and police had no clue what they were encountering as they thought those containers were just garbage bins. She reassured the community that their complaints will no longer fall on deaf ears and she will act in such dangerous circumstances because this should never have been accepted in the Prospect community.

MP Turner also shared that she was aware of cars being scrapped in residential areas and some businesses operating illegally.

She assured residents that they can reach out to her office and feel confident that their complaints will be dealt with anonymously. The hazardous material was then escorted to a DEH site on Wednesday night. The matter remains under police investigation.

The Utility Regulation and Competition Office (OfReg) has confirmed that they have now launched an investigation into what they describe as “illegal fuel storage at a private residence at Mangrove Avenue in Prospect.”

OfReg confirmed that once the situation stabilized, they confiscated the gasoline and diesel.

OfReg’s Fuel Team went on-site to address the matter of storage equipment observed at the location. A significant quantity of gasoline and diesel was observed, all of which were confiscated as required under the Dangerous Substances Act.

OfReg confirmed that there were no injuries, and no immediate environmental impacts were assessed, however, significant damage was observed to property and equipment at the site. OfReg has commenced a full investigation.

Chief Fuel Inspector Mr. Duke Munroe said, “these illegal operations which fly under the radar continue to present a significant danger to the public and the environment. We rely heavily on members of the public to report these situations to us so we can take appropriate enforcement action”.

OfReg reminds the public that it is illegal to store fuel over 250 gallons without a valid operating permit.  Where fuel is stored below the legal threshold, for permanent or incidental/temporary storage, the office is available to provide guidance on the safe storage and transport of dangerous substances.

OfReg may be able to pursue some heavy fees, but DEH has also confirmed that they have issued an abatement order to force him to clean up the property.

A source familiar with the process confirmed that the fuel taken from the property will be handled as contaminated and will be dealt with in the same way as recycling oil. It will be placed in storage tanks and shipped off island.

The fire department sprayed foam in the tanks the fuel was stored in, and they are now contaminated and cannot be used for any other purpose.

This is not the first time that complaints of this nature have been highlighted by residents across the Cayman Islands. However, this incident has left many wondering if government enforcement agencies will have a more proactive plan in place for dealing with complaints.

No, thanks.
How do you feel after reading this?
Tags: enforcementGarfield Wayne Ellis

(CMR) A police officer and a former employee of a local telecommunications company are facing criminal charges after the ex-employee...

(CMR) A man has been hospitalized after he sustained head injuries during a fight at Sol y Luna early Saturday...

(CMR) The RCIPS said there has been an increase in reports of thefts from vehicles, with perpetrators regularly checking for...

(CMR) Two persons were robbed of cash and bank cards on Thursday, 2 February, by an armed masked man at...