(CMR) The demolition of a 200-year-old historic stone wall has caused some friction between neighbors in the Walkers Road area of George Town. According to the National Trust website, the dry stone wall is believed to have been built by slaves and “forms a property line for many homes in the Webster Estates area.”

It has left one party seeking legal advice and the other sharing they were not aware of any historical importance of the wall and would be seeking to compensate for it somehow.

The distraught neighbor took to social media to express her dismay at the removal of the wall, which she shared dated back to her great grandfather Leighton Bush's property in Sound Sound. The post was shared in the Cayman Developerment Watch Facebook group and garnered a significant number of comments.

The owner noted that she “cherished the charm of the stone wall and what it added to my property … makes me so sad.” She went on to say that the removal demonstrates a lack of respect and that this matter “is by far not over.” She also noted that in order to remove the wall, they trespassed on her property. The aggrieved party shared with CMR:

“She Lori ann Foley made a commitment to do planning board and her lawyer that she would not touch the stone wall.”

It appears the matter started with an after-the-fact CPA approval request for Lori-Ann Foley to erect a 7'4″ fence with barbed wire along the property wall. The application was a result of an Enforcement Notice as planning permission was not sought in advance of the erection of the fence.

It noted that she wanted to keep her dogs safe during construction and renovations. They also made claims that there were trespassing neighbors “from the rear of the property who vandalize and destroyed the walls of their house that is currently being renovated.”

The adjacent landowner submitted a letter sharing that she did not object to the proposed fence. However, she plainly stated:

“I do make a ernest request that the rock wall of sentimental value to be untouched, as well as the screen of negotiation along the same remain.”

In a subsequent letter #2, it noted that they had received correspondence from the adjacent property owners who requested the rock wall be left in tack. Giving confirmation that it would be the letter stated:

“Our client, Ms. Lori-Ann Foley agreed to comply with the request of the adjacent parcel owner and will not remove the existing rock wall and vegetation.”

Despite that promise, the wall was removed on Wednesday. 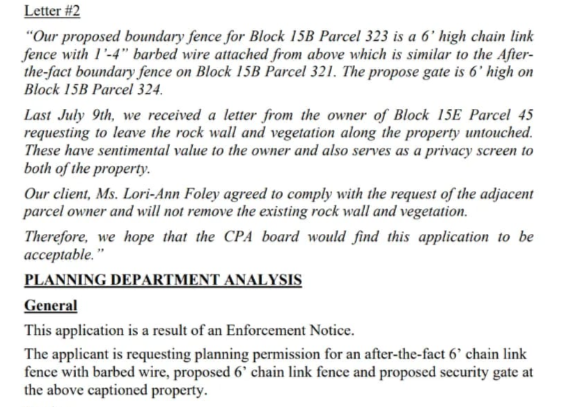 The fence applicant, Lori-Ann Foley, reached out to CMR to clarify that her application and commitment to not remove the wall is for a separate parcel and not the one now in dispute. That portion of the wall remains intact. She also shared that they own the land where the wall was removed.

Speaking to CMR Leslie Harvey shared his thoughts on the removal of the wall, which he said was done by his father. He shared, “And it is not designated as a historical monument of any sort So we were in our rights to remove it if we wished, according to law.” They went on to note that they know that “some things have emotional significance to people and had the father known it would have “caused emotional distress to people,” it would not have been removed.

It was removed to “clear up some space to plan some fruit-bearing trees.”

Harvey shared that he does not believe it has any “specific historical significance.” He also noted that he is “conflicted about the preservation of this wall now” because he understands that the slave wall was built by slave labour to make the boundary of a slave holder's property and “in my eyes, it's almost a monument to the practice of slavery.”

He went on to note that “this is just a boundary marker that is a pile of rocks that arent's even held together by mortar or anything of the sort.” He further opined how hard it must have been for the slaves to find such large rocks for the wall. CMR understands some of the rocks may have already been removed from the location and some are curious as to what the intended use for that material is.

For the issue of who owns the land in question, a well-known business man and someone of a historian on South Sound provided us with a survey map which he shared clearly demonstrated the wall is not on the Harvey property as they have asserted: 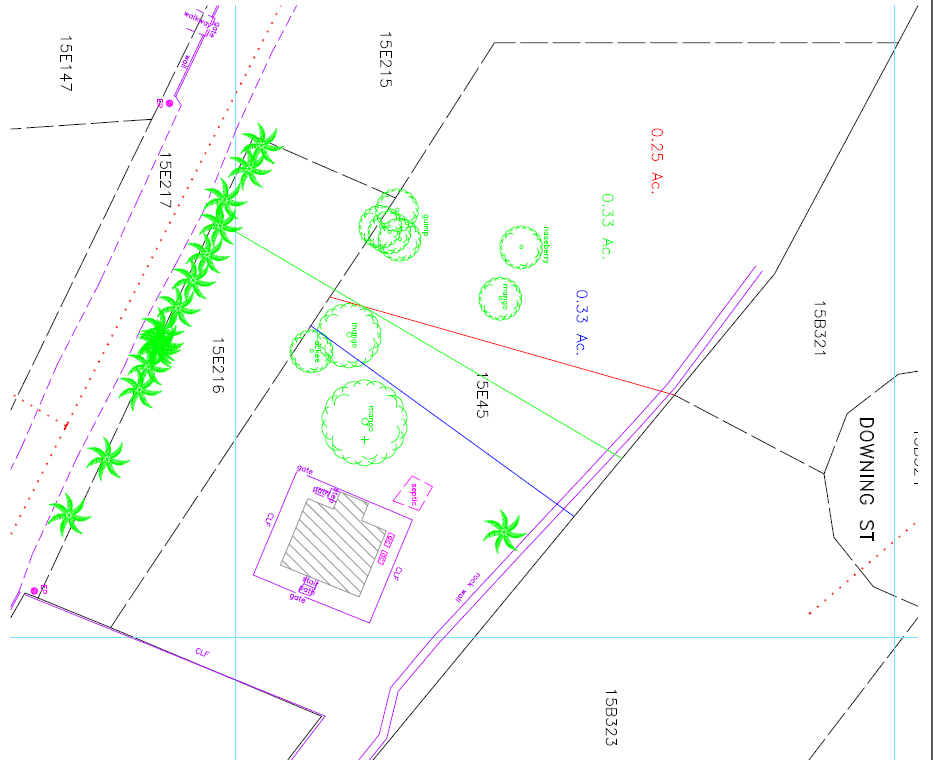 Despite his understanding of historic slave stone walls, all indications are they are considered an important part of Cayman's history. In 2016 the National Trust shared the following on its Facebook page: 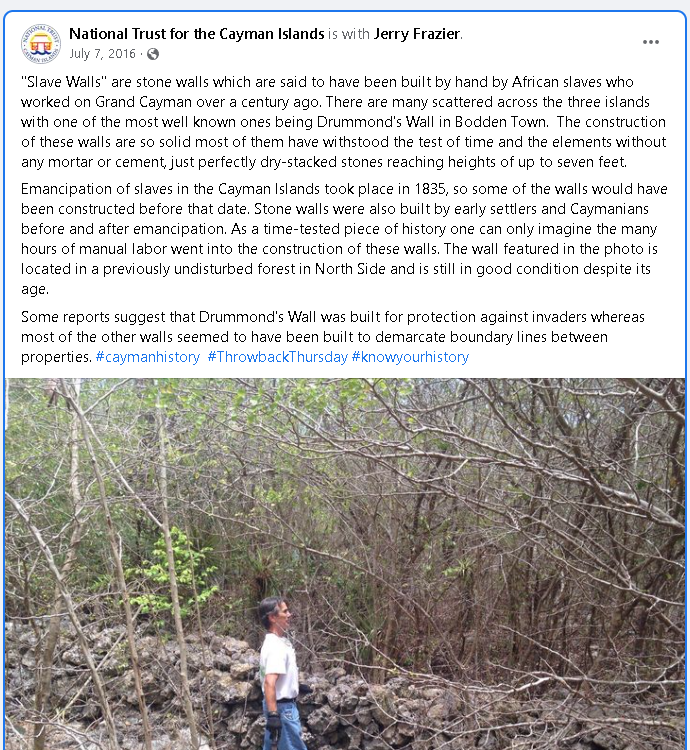 Slave walls can be found in eastern districts, including East End, Bodden Town and North Side. They can also be found around the Caribbean, including Saint Martin.

Finally, he shared that the part of the wall that was removed was on their land, which the family has owned for over 30 years. The police were contacted and provided the following response over the dispute with the Harvey family: 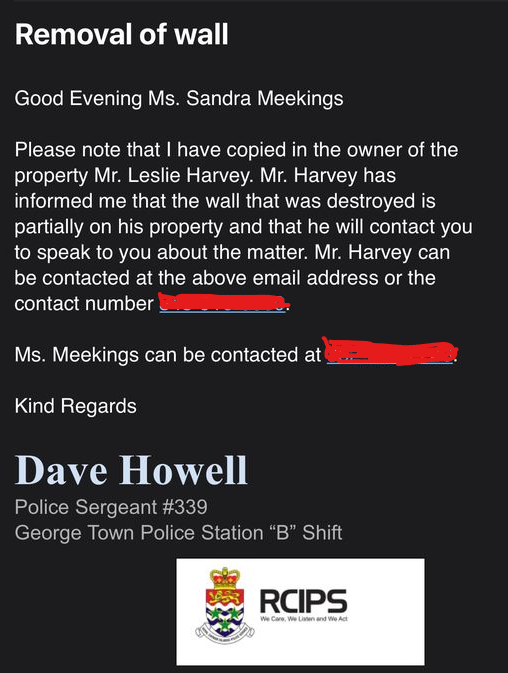 Despite this attempt at mediation, it appears that the matter is likely headed for litigation.

No, thanks.
How do you feel after reading this?
Tags: Lori-Ann Foleyslave walls