(CMR) Accountant Fernando Mota Mendes (55) has been charged with 12 counts of obtaining property by deception and 1 count of theft for taking over CI$35,000 from his clients. He appeared in court recently to answer to the charges that he used his property management company to con his clients out of bookings and money.

Mendez was employed as the maintenance manager at On The Bay Condos in Old Man Bay in North Side. In June 2019, he met the owner The Pink Beach House in Rum Point. She expressed concerns about her existing property manager company. He shared that his company Guardian Properties, specialized in bio-decontamination of properties.

Eventually, they agreed to give his company the contract at the same rate and he would be responsible for opening and closing the property when guests stayed at the premise. He was also going to maintain and keep the property clean. Mendes has never had a business license for this company.

DCI records reflect that Mendes has a business license for a company called Guardian Group which he claims was the purpose of real estate investments. His wife had the business license for property management in her name: MARGARET MENDES T/A GUARDIAN PROPERTIES which she obtained in January 2020. It remained valid until January 2022.

Our research shows the company started to be set up in December 2018.

The company's website claims to have “over 30 years combined experience with all types of property.” It does not list any local contacts but includes a Miami, FL 786 phone number as well. The site claims it's powered by Guardian Digital Marketing and affiliated with Guardian Cleaning Services. It has listed that it's a proud member of ACAMS, the American Accounting Association and the Institute of Internal Auditors. It includes a generic marketing video of properties clearly not located in the Cayman Islands. 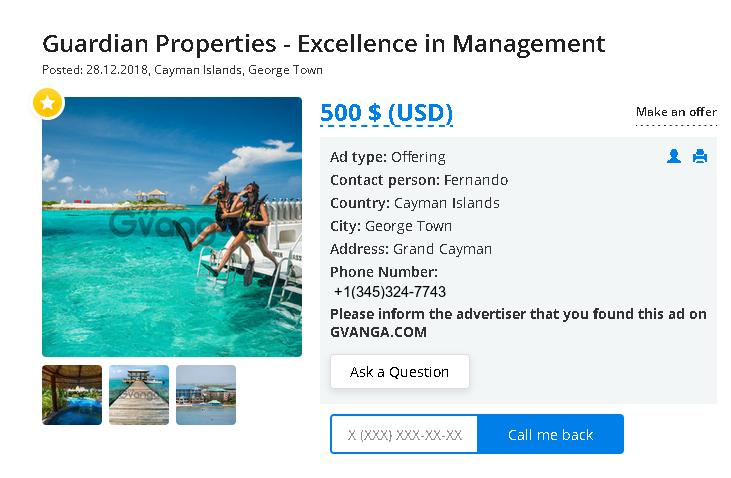 During the pandemic, the property was taking some listings via VRBO an online booking portal. There was no agreement for Mendes to take bookings on behalf of the owner. However, Mendes is being accused of not only taking bookings over the course of several months without her knowledge or authorization but also keeping all the rental proceeds for himself.

The case against Mendes is that he was collecting cash payments from renters ranging from $450 up to thousands of dollars per booking. In fact, he was undervaluing the property but giving locals staycation rates well below market value.

At times Mendes almost got caught because he would book the property at the same time that the owner had secured an online booking. Mendes provided numerous excuses to his renters, including claiming that the property was damaged during a storm or there was an error with the booking agent. At one point, he claimed he was in a serious car accident and could not get there to let the renters into the unit.

He would also turn off security cameras so that the owner would not be able to remotely see that people were arriving for bookings she had no knowledge of.

He would then use his wife's connections at South Bay Beach Club to move his bookings that were unable to stay at the property. Things finally came to head when on June 10, 2021 the owner discovered that someone was leasing her house on a 6-month contract for $3,500. Medes is said to have been presenting himself as the property owner to all of these clients.

At that time, the owner had the locks changed on the property and changed her access codes. He also posted on VRBO that no bookings were permitted via Guardian Properties. Mendes continued to advertise on the local classified website Ecay Trade and took a booking on June 9, which he received a $2,250 deposit for. The balance of $2,000 was sent in July.

On the morning the family was due to arrive, they became extremely concerned because they had not received any access codes from Mendes. They were given excuses and threatened to contact the police and the media. Once again, he used his connections via his wife to secure them a unit at South Bay Beach Club. This was less than ideal because the family has specifically chosen the Pink Beach House to accommodate their special needs children.

Mendes was finally arrested in September 2021 and had his mobile phone seized. An examination of the phone discovered WhatsApp messages and booking details, including the fact that payments were mostly made by cash or put in his Credit Union bank account.

He was interviewed on September 21, shortly after his arrest and March 8, 2022 in the presence of his attorney Lee Halliday Davis. He claimed that the owners were fully aware of the bookings and that he was keeping the money because they had outstanding expenses with him.

When asked about his associate Antonio he denied knowing any such person. However, his phone records showed automated messages that read:

“My name is Fernando. I am the owner of Guardian Properties and Antonio is an employee of mine.”

At the second interview, he admitted after being shown the messages that he used that alias because he did not want to pay Ecay Trade for a business account.

He was formally charged on June 22, 2022 and is not permitted to leave the island without the court's authorization.

No, thanks.
How do you feel after reading this?
Tags: Fernando Mota Mendesscammers