(CMR) A 30-year-old woman from George Town was arrested following a hit and run on Sunday, 19 June, which left the driver of a motorcycle hospitalized. The woman reportedly ran away from the scene to a nearby apartment complex where she resides.

Police and other emergency services were dispatched by the 9-1-1 Communication Centre to a report of a two-vehicle collision involving a motorcycle and a motorcar that took place on Crewe Road in the vicinity of Palm Dale just before 9:30 pm.

It was reported that the driver of a red sedan motorcar that was involved fled the location following the collision. The motorcyclist was transported to the Cayman Islands Hospital by ambulance, where he is currently receiving treatment for serious but non-life-threatening injuries. 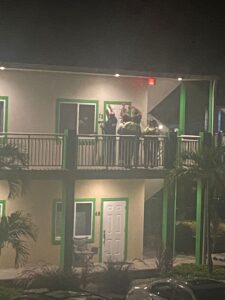 A search was carried out to find the woman, which included removing her apartment door; however, she could not be found initially. Sometime later, the woman of George Town was arrested and bailed pending further investigation.

The roadway was closed overnight while the scene was being processed but has since been re-opened. The woman's car was towed from the location Monday morning.

Police are investigating the collision, and witnesses are encouraged to provide information by calling the George Town Police Station at 949-4222 or the Traffic and Roads Policing Unit at 649-6254. Persons may also provide tips via the RCIPS confidential tip line at 947-7777 or anonymously through its website.

No, thanks.
How do you feel after reading this?
Tags: Crashhit and run

(CMR) Police have confirmed that the driver of a motorcycle died after he lost control of his black Suzuki motorcycle...

(CMR) A 25-year-old-woman of Bodden Town was arrested on suspicion of driving under the influence of alcohol and careless driving...

(CMR) The drivers of two vehicles involved in a fiery crash early Thursday morning,11 August, have both been arrested on...

(CMR) A 39-year-old female of George Town was arrested on suspicion of causing death by dangerous driving in relation to...

(CMR) A 20-year-old woman was pronounced dead, while three others were injured, with two in serious condition, following a fatal...