(CMR) The developers of Mandarin Oriental Grand Cayman, Resort and Residences held a community meeting Tuesday evening at a property close to the future development site for the project. Some 55 people were in attendance for the first-of-its-kind event by a major developer on the island.

The development is set to break ground in August now that the island has re-opened.

The meeting was spearheaded by one of the co-developers Spencer Levine to meet with residents in the area. Levine is a landscape architect with his 43-year-old family development business RAL Development Services (RAL). He explained that he was keen to change the dynamics of the communication process which had been criticized when a previous meeting some years ago was not attended by the developers. Those in attendance shared that it had put a bitter taste in their mouths.

Levine was hopeful that the community would see his commitment to moving forward in a more positive direction.

The main objective of the meeting was to update Beach Bay residents about the latest developments on the first five-star property built away from the crowded Seven Mile Beach. The project is being developed over a course of many years over several phases covering some 67 acres with less than 20 acres being developed in the initial phase.

The development will be the first Residences at Mandarin Oriental in the Caribbean, and the first luxury offering to be developed on Grand Cayman’s southern-most coast called St. James Point. It will boast a total of 91 hotel rooms and 42 residences. The facility will include the beach with its protected swimming area, adult and lagoon pools, cabana and lounge services, The Spa at Mandarin Oriental, The Wellness Center with a multi-studio fitness facility, a Kid’s Club and the most elevated food and beverage experiences, with five restaurants, on the island.

The half a billion-dollar initial development is slated to open in late 2024 or early 2025. 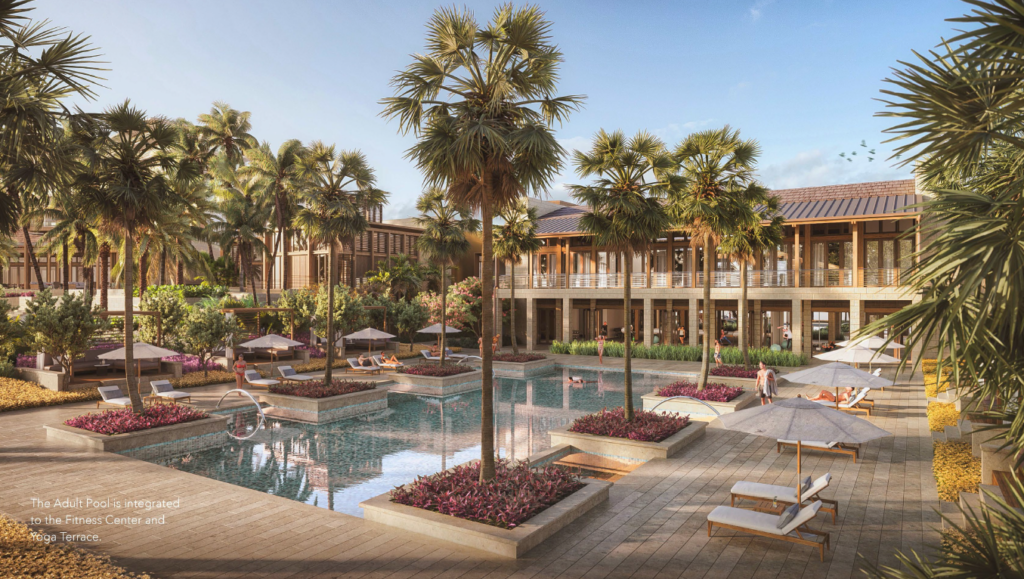 Levine explained that the COVID-19 pandemic gave them additional time to review and refine their plans and make some amendments to the project. Included was the developer's voluntary decision to remove some eight beach bungalows that had been approved by planning. They also redesigned the pool and pushed it back further. He explained this:

“created a landscape-based approach to the coastline rather than an architectural one.”

He explained during the two-year break they redesigned how the buildings sit on the landscape to minimize and reduce the necessary rock excavation by over 80 percent.

Levin explained that a website will be designed for the purpose of continually providing information to the public as the project progresses with “look ahead construction progress.” It will also be used to post job and training availabilities. He noted that a project of this scale and complexity takes time.

During the construction phase, they anticipate some 500 construction jobs being available during the 30-month construction schedule. They affirmed their commitment to utilizing local contractors and vendors as much as possible.

Planning approval was granted in December 2019 with an appeal being upheld in October 2020. Mandarin Oriental will be the operators. Levine also confirmed both the developers and operators were committed to an environmentally friendly facility with as little of a footprint created as possible. Some of the commitments include turtle-friendly lighting and ambassadorship programs.

He also explained that the developers have spent some $2 million to improve the jetty structures after a maritime study was conducted in 2019. Explaining that leading coastal engineers determined that the swimming area was not supporting any maritime health since Hurricane Ivan and more sand was being lost.

Some members of the crowd appeared anxious to have their objections heard and shared a number of concerns with Levine after his brief presentation. During the almost two-hour-long meeting, residents shared concerns about beach access, possible noise pollution, and increased traffic to the resident area. Their intense Q&A segment included residents asking what was “in it for them” after Levine explained how the project will inject millions into the local economy.

He also shared that some 300 jobs would eventually be available at the facility which includes both a hotel and residences.

Responding to questions about beach access he confirmed that there was no desire to “militarize” beach access and in fact, pathways were being created for the public to have unencumbered access to the public beach area.

Four PACT members were in attendance including Ministers Chris Saunders and Jay Ebanks. Saunders represents the constituents of the Beach Bay area and was put to task on various questions about how the development was approved by the CPA.

Saunders explained that he was there to take the pulse of the community and further explained that various legislative changes made under the Progressive lead administration made it possible. He stopped short of confirming what his position was on the project. He would only say that as private land owners they had a right to use the land within the remits of the law.

Numerous people have reached out privately to CMR to share that they were in full support of the project and had privately expressed their thoughts to the minister.

RAL operates both as a principal owner/developer and as an owner’s representative, bringing its expertise to residential, commercial, mixed-use, planned communities, Resorts and hospitality, and other property types.

RAL prides itself on its dedication to the communities it works with, creating strong and lasting relationships with local constituencies wherever they build, as well as employing union labor and collaborating with MWBE contractors when possible. RAL uses and believes in cutting-edge processes and technologies, but never substitutes them for the experience, ingenuity, creativity, passion, leadership, and professional judgment provided by its people.

No, thanks.
How do you feel after reading this?
Tags: Community MeetingMandarin Oriental

(CMR)  West Bay residents can once again enjoy the convenience of a recycling depot in their community following the opening...