(CMR) Cuban migrants at the Fairbanks Detention Centre were protesting since Saturday night and into Sunday afternoon. Sources reveal that all 78 migrants are complaining they wish to be processed and immediately set free. Family members have also reached out to CMR with their concerns inquiring about the status of the migrant's health.

The protest was said to be “peaceful” according to eyewitnesses with them kneeling and raising their hands while singing in Spanish.

The RCIPS was dispatched.

Some of those migrants have now been moved to the facility in Breakers because of a chicken pox outbreak. 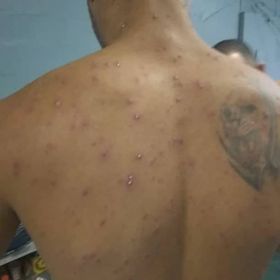 However, Caymanians appear to be losing their sense of CaymanKind towards the migrants who they are calling ungrateful and inviting them to immediately return home. In very strong language not appropriate here many shared the general sentiment that the Cubans that come to Cayman are “F**** ungrateful” and should show some sense of gratitude given the conditions they just left.

“Cuba was treating them badly according to them …. that's why they risked their lives and left. Some of them are very ungrateful though and seem to forget quite quickly and easily how difficult the economic conditions are in Cuba.”

Some of the migrants took to social media to share their concerns and protest regarding what they say is inhumane treatment:

Several of them were removed to another location after an outbreak of chicken pox with government officials being extremely concerned that this could be the precursor to imported cases leading to a monkeypox outbreak.

Despite their demands, a stark warning is being issued by many in the community that migrants should consider twice before coming to the Cayman Islands. Some had previously told CMR they were under the misguided impression that they could come here by boat and be able to work shortly after arrival. They believe there is some new agreement between the Cayman Islands Government and the Cuban government.

However, that is not the case and Cuban migrants will be processed and returned to their home country. One CBC source spoke to CMR anonymously sharing that their demands cannot be met:

Allegations of them working illegally have raised the alert at CBC and WORC to keep a closer eye on them. Some shared also that they are accessing vehicles and driving illegally on Cayman roads.

Despite these controls, some community members are sharing that is it still not enough as other migrants have been allowed to roam freely.

East End resident and three-time political candidate, John McLean Jr. shared his concerns last week that the migrants were being permitted to roam freely in his community. He shared at the time that he was calling on the Cayman Islands Customs and Border Control (CBC) to take control of “roaming Cubans” and prevent what he says could be a dangerous situation from happening.

McLean shared his concerns that the vulnerable and elderly community in East End is at particular risk from unknown persons that CBC has been unable to properly vet in any way. He was demanding that the government take better control of the situation and implement measures to track the migrants or keep them contained until they can be repatriated back to Cuba.

In the past months, there has been a significant influx of Cuban migrants into the Cayman Islands and as a result, some have been housed in the district of East End. This has caused McLean angst as he states he sees them roaming up and down “all hours of the night and day.”

Recently on an episode of The Cold Hard Truth the Director of Customs & Border Control, Charles Clifford shared that the Cayman Islands had to follow certain human protocols as it relates to Cuban migrants. He noted that they are not prisoners so after an initial intake process they would be released into the community pending consideration of any asylum application.

However, McLean notes that his concern is for the citizens of his district which include his elderly mom. Speaking exclusively to CMR he noted that:

“I honestly don't care what CBC has said. They are not thinking of the consequences of having of these migrants potentially harm someone. Then it will be too late”.

He noted that there are absolutely no controls in place and many residents share his concerns.

120 Cubans repatriated from Florida after Hurricane Ian
Cubans who fled Cayman to be deported from Belize
Cuban migrants in Honduras after leaving Cayman
Cubans try to reach US in pedal boat
Share your vote!

No, thanks.
How do you feel after reading this?
Tags: chicken poxCuban migrants