In October 2021, UCCI advertised for a Marketing and Communications Manager to join its team. The job was posted on the Cayman Islands’ Government jobs website, in the Cayman Compass newspaper, and on LinkedIn. UCCI did not advertise this job on any website or publication that segregates or specifies a particular audience.

CMR discussed the job advert on our morning talk show and also notified the UCCI board of the placement. 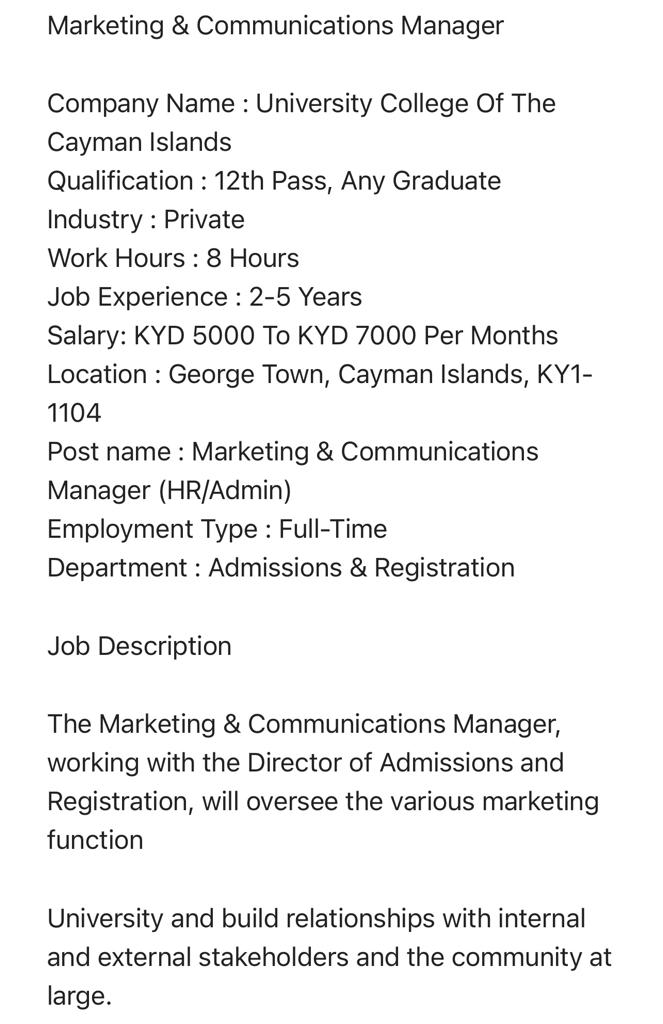 They reached out to CMR on Friday afternoon confirming that the advert was not placed by anyone at their educational institution and that in fact, it was not an active job listing at all. They shared at the end of the extensive interview process in 2021, the job was offered to a Caymanian, who unfortunately did not ultimately elect to take up the post.

Soon after, UCCI was informed that an HR audit had been scheduled. A decision was made to place the position on hold until the end of the HR audit, as UCCI had not managed to recruit any other suitable person to the role during the first round of interviews. This job advertisement has not been re-posted since 2021 and the position remains vacant pending the outcome of UCCI's current HR audit.

They also noted that before before CMR's inquiry on Thursday they had not heard of this website before. They believe that it is a spam site that simply pulls random jobs from the internet and reposts them. Neither UCCI's HR team nor its Leadership team had ever heard of the JobKart website. They did express appreciation for us pointing out the job advert so they could try to warn the general public:

“Thank you for bringing this unfortunate matter to our attention. But I personally assure you that UCCI is not complicit in any effort to circumvent either the letter or the spirit of the recruitment laws in the Cayman Islands.”

No, thanks.
How do you feel after reading this?
Tags: JobKartscammersThe University College of the Cayman Islands

John Gray: No one injured in afternoon incident