(CMR) Another general election by the Cayman Islands Music and Entertainment Association (CMEA) has led to further controversy in the organization it was revealed to CMR during the Sunday evening meeting. According to numerous attendees, the recent CMEA's annual general meeting was filled with yelling and screaming and has now ended with previous past president Jean-Eric Smith (Notch) claiming fraud.

Steve Errol Reid was elected as the new president of the organization. 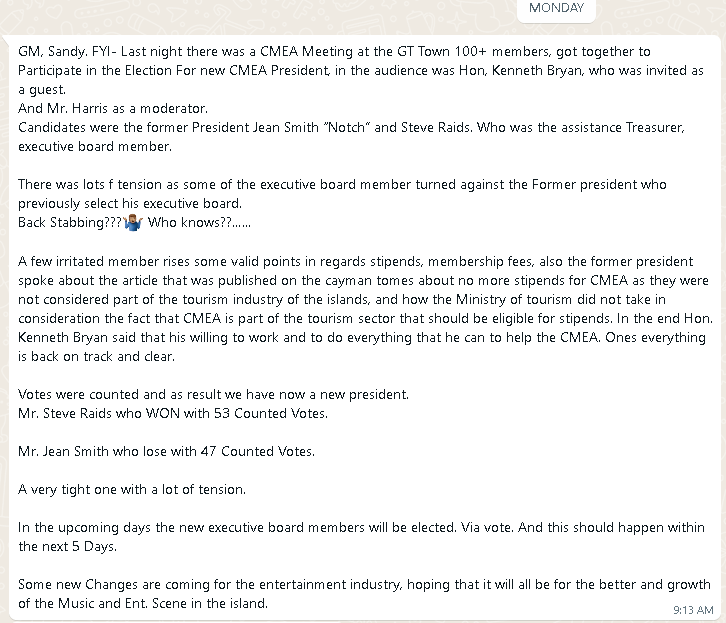 This is not the first time that the association has had questions about the outcome of an election but this time around the majority have shared it was run according to the constitution. Despite wide support, Smith claims that the election was fraught with “fraud and impropriety.” It is understood that the claim is that some voting members were not in good standing.

According to a statement sent to local media via email, Smith states that there was “considerable suspicion surrounding the proxy votes” presented by Mr. Reid during the AGM on Sunday, March 6th, at Constitution Hall GT.” The email went on to state that “after more than three hours of standard year-end procedures and an extended Q and A with the members, the annual election was officially postponed just before the closing time of the former Town Hall, with only the ballots for President being cast and counted.  Due to a last-minute change in the traditional electoral process, other senior positions on the executive board are still vacant, with future nominations and a voting process to be announced at a future date.”

“In the interim, and while there is no CMEA Executive Board currently active, the registered controlling officer of the NPO, Mr. Jean -Eric Smith has alluded to there being considerable suspicion surrounding the proxy votes presented by Mr. Reid, which are now the center of much controversy and the internal investigation,” the email continued.

According to the email, disgruntled members of the association have now formally expressed their concerns in writing , and these complaints and the corroborating evidence will be shared with the official observer from the Ministry of Culture, who attended the AGM, and the relevant authorities at the NPO office.

“If the evidence warrants further action, we will be effectively seeking a stay on the contested election results and the continuation of the process until the matter is resolved.  Members are asked to refrain from speculation and rumors while allowing the fact-finding process to run its course,” the email ended.

Despite his assertions CMEA members have privately contacted CMR expressing their disbelief at the lack of professionalism at the AGM sharing that Smith is refusing to give up the position after 12 years in power. One attendee express concern over “yelling and screaming” and noted they were thankful that the government representatives were in attendance to deter a physical altercation.

“Government minister and minister's reps were in attendance which prevented it from coming to blows.”

Another attendee said, “Probably one of the worse meetings I've attended with shooting and high tensions.”

This is the second election that has ended in controversy as the results of the 2020 elections were also disputed. Persons have accused outgoing president Jean-Eric Smith of being unwilling to give up the leadership role after more than 12 years and have blamed him for the continued fracas in the organization. Despite their attempts, he refused to step down.

Several board members said an email sent to the media on Monday from the organization was merely a reflection of Smith's views and not those of the executive. They noted that he has always maintained control over that email address and board members do not have access to it.

No, thanks.
How do you feel after reading this?
Tags: Jean-Eric SmithSteve Errol Reid