(CMR) Cayman Prep & High School is hosting an anti-racism workshop on Monday morning for all Year 8 students after it finally acknowledges that “concerns have been raised with us regarding the use of unacceptable language in Year 8.” The email was sent on Friday afternoon.

CMR has received numerous complaints spanning several years now that the school is less than proactive in addressing both parental and student concerns around issues they say boils down to racism, colorism, and an anti-Caymanian sentiment. The issue was again recently highlighted after several students wrote to school administrators expressing that they were being subjected to constant bullying which they believed was as a result of their nationality and most importantly darker skin color.

At least one physical altercation has resulted as a result of a child being called the N-word by a fellow student. The student who used the N-word was given lunchtime detention which upset those who witnessed it.

Both students and parents have expressed to us that the school's past responses from both teachers and administrators have been lackluster at best and in some instances, they also demonstrated a level of intensity and prejudice towards local students. One student expressed his concerns directly to the schools by sharing:

Other parents have agreed that the school has long needed to address these concerns but because of the academic competitiveness of the school it was easier for parents to ignore these complaints. One parent shared:

“Prep has an excellent academic program and my family makes a lot of sacrifices to send your children there. For far too long we have ignored all of the obvious racism. In fact, multiple children have gone through the school so we are well familiar with the MO. The impact finally sunk in when a friend asked if I was happy paying to have my children emotionally and psychologically tormented and scarred just to say they went to the best academic school in the Cayman Islands.”

During the discussions of racial divides that engulfed the entire world in the summer of 2020 a few persons boldly spoke out with one parenting highlight the lack of diversity at Cayman Prep where her children attended. She also noted with interest the extensive waiting list that never moved from local candidates but space could be made available almost immediately for well placed newcomers who worked at Cayman's largest law firms. Her social media post resonated with a number of other persons who had been waiting on placement in vain for year and they too shared their experiences. Ironically some were quickly called and given a spot after the posts and comments went viral. 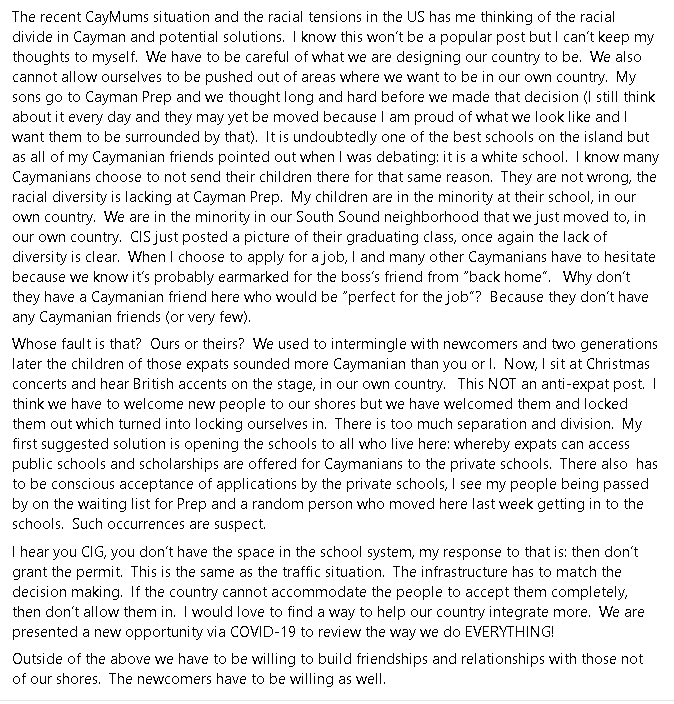 Cayman Prep appeared unable to address the concerns until now with this workshop. Sadly, some parents have also shared that children are feeling the emotional turmoil of the situation with some wanting to self harm and have shared this soft approach maybe a little too late.

The school has finally acknowledged that they wish to “deeply listen to children and to acknowledge the issues and share what action is taken to stamp this out.” They also noted that they are aware that social media plays a role in disseminating the “language, rumors, and negative attitudes.”

Parents are optimistic that this is a turning page for the school and are hopefully for a more wholistic approach nothing that a single workshop is unlikely to have any lasting impact on those involved. Many are hopefully that a comprehensive inclusive approach can be adopted with experts brought in who understand who to teach diversity at all levels.

No, thanks.
How do you feel after reading this?
Tags: Cayman Prep & High School