Cubans rescued off the coast of Florida today

(CMR) Over the weekend multiple Cuban nationals have contacted Cayman Marl Road concerned over their friends and family members who left Cuba a week ago and had not been heard from in the past week. Turns out they were rescued this morning by the US Coast Guard after their vessel was found sinking 40 miles (about 64km) off Key Largo, Florida.

“They didn’t have lifejackets or safety equipment,” said Capt. Shawn Koch, commanding officer of Air Station Miami. “If the air crew hadn’t found them on the patrol, these people would not have survived the night.”

Six migrants were repatriated to Cuba, and four others were evacuated to Florida for medical treatment, the Coast Guard said.

The rescue came two weeks after a boat believed to be used for human smuggling capsized off Florida’s coast en route from the Bahamas. Only one of the 40 passengers survived. 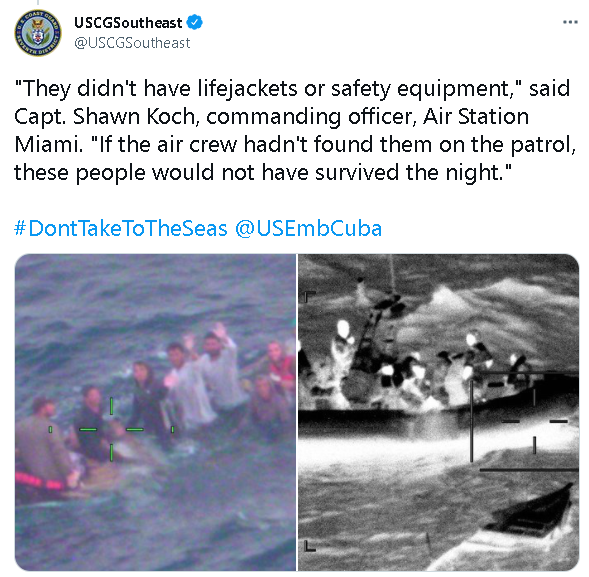 Just Thursday the U.S. Coast Guard said it had returned 119 Cuban migrants to their island home after picking them up at sea, marking a growing trend of migration by water from the poor, communist-run country to its wealthy northern neighbor. The migrants, swept up in 12 operations that took place over just three days in the South Florida Straits from the Bahamas to the Florida Keys, were found in boats adrift offshore, the U.S. Coast Guard said in a statement.

The Cuban government's media outlet said on this repatriation set a record for the past four years.

Cuban nationals continue to get desperate and try their luck by sea and land as Cuba’s economy is battered by mounting U.S. sanctions and the COVID-19 pandemic, which has significantly reduced international tourism vital for foreign exchange on the Caribbean island.

This year's Coast Guard figures has already seen a significant number of Cubans attempting to illegal migrate to the United states – 586 compared to 838 repatriated for all of 2021.

The Cayman Islands has always been impacted by the surge with several vessels already coming into Cayman Brac waters over the past few months. Additionally, Jamaica is now refusing to allow Cubans to travel from Cayman to their country which is being used as a transport for immigrants to eventually access the US via Nicaragua and then Mexico.

The sea route from Cuba is considered particular dangerous because of swift ocean currents, poor scorching weather and shoddy vessels.

Remembering Bob Marley on what would have been his 77th birthday