(CMR) Convicted immigration fraudster Marcus Alexander has lost his appeal against both conviction and his sentence before the Cayman Islands Court of Appeal. He attempted to rely on an anonymous email sent to the court that claimed that one of his co-accused, Pheadra McDonald, was related to a particular juror through her mother, Sharon Scott of Cayman Brac.

On January 16, 2019 Alexander was convicted of conspiracy to commit fraud on the government for events that took place in 2015 and 2016. This case involved numerous immigration officers taking bribes to pass non-English-speaking people who were not successful in the English language test. The people who benefited from the scheme were nationals of the Dominican Republic, Cuba and Honduras.

This was the largest corruption case ever held in the Cayman Islands and was split over two trials to cover all 12 defendants. Alexander was one of 12 defendants accused of corruption, that was prosecuted in two separate trials. Thus far he's the only defendant to appeal against conviction.

He was also convicted of failing to report solicitation of an advantage. Alexander was a testing officer and 10 of the approximately 15 suspect tests examined in detail in the first trial. He was sentenced to four years imprisonment on Count 1 and four months concurrent on Count 2. He was seeking leave to appeal against the sentence of 4 years.

His appeal was based on an anonymous email received by the court and a letter submitted to the court. The anonymous email alleged Phaedra McDonald had a family member on the jury which is why she was not convicted of the conspiracy offense. It stated: 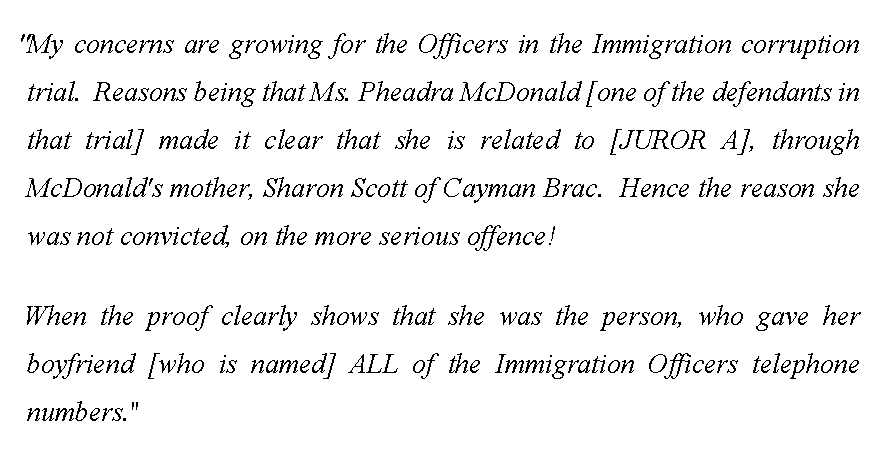 McDonald was acquitted of the conspiracy but convicted of one of the substantive offenses. It made reference to a conversation that took place in Foster's supermarket and requested an investigation be carried out and that contact had been made with the Chief Justice about these concerns.

The court noted that the email “seems to us amounts to little more than tittle tat”. However, McDonald also wrote a letter to the court after the verdicts stating: 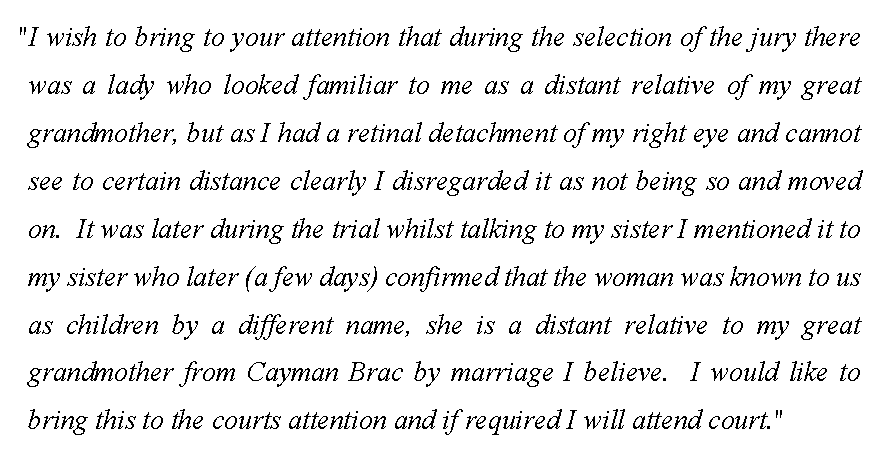 On the basis of the email in this letter, Alexander's attorney was seeking to have the conviction squashed claiming that this amounted to an irregularity and there should be a further investigation calling on McDonald's so that she can expand upon what she said in the letter.

The Crown argued that this fell short of any actual reasonable belief of bias upon the basis of a relationship between the members of the jury and the parties to the trial. The court agreed and refused leave to appeal against conviction.

His attorneys also sought to argue that the sentence handed down was unlawful. The court also found that none of those arguments had any substance.

He then attempted to argue that his sentence was unfair because he received the highest sentence of those who were sentenced by that particular judge. The court accepted that he was as previously stated by the judge a major actor in this widespread conspiracy. They concluded that the submission of disparity was hopeless.

No, thanks.
How do you feel after reading this?
Tags: Marcus AlexanderPheadra McDonaldPheadra Spence

(CMR) Roger Davard Bush (47), who was found guilty earlier this year of murdering his son Shaquille Bush (24) in...