(CMR) On Sunday, 3 October 2021, the RCIPS participated in the funeral service of the late Rev. Dr. Linda Darnell McField, who passed away on Monday, 20 September 2021.  SC 573 Dr. Linda McField was formerly a Special Constable with the Royal Cayman Islands Police Service for just under 40 years.

During the funeral service, which was a full RCIPS ceremonial service, the body of McField was transported to the George Town Police Station for a pass by, then to the Lion Centre, where she was carried by an RCIPS Bearer Party and saluted by a parade contingent, formed in her honor.

During the ceremony, Deputy Commissioner of Police Anthony Ennis presented the tribute on behalf of the RCIPS and Special Constabulary, reflecting her 40-years of loyal and distinguished service and some of the highlights of her career. He expressed condolences on behalf of the Commissioner of Police and members of the service and her colleagues from eth Special Constabulary that were equally represented on the solemn occasion.

At the internment, DCoP Ennis presented the folded Cayman Islands flag, along with her service cap and belt to her husband, Mr. “Bunny” McField, then laid the RCIPS Wreath at her grave. At the end of the graveside ceremony, a final call for service was aired in her honor by the emergency dispatcher at the 9-1-1 Communication Centre of the Department of Public Safety and Communication.

SC McField was the first woman to volunteer as a special constable within the ranks in October 1981. During stories of her service, she said that that she was actually volunteering with the police since she was 11 years old, delivering food to Central Police Station for prisoners. Throughout the years, with her hard work and dedication to the community, she has paved the way for many others to follow and left an impact on most, if not everyone, she came in contact with.

When she was asked why she decided to become a Special Constable, she said, “I was the Personal Assistant to the late Captain Theo R. Bodden when there was a spike in crime in the year 1981. The Commissioner of Police at that time stated he did not have the resources to address the issue, and the Chief Secretary, a position now known as the Deputy Governor, the late Honourable Dennis Foster, asked Captain Theo to organize the Special Constabulary to assist the then Cayman Islands Police Force. I was asked to assist Captain Theo, who was the first sworn Special Constable, and I was the second.”

She explained that three other men were sworn in shortly after to assist the police, all of whom were business owners with clean police records. She outlined some of the struggles they faced with peers and other members of the public who were not used to this new posting within the police, but she and her colleagues stood strong and overcame those issues.

She attributed being able to maintain a work, home and volunteer life balance to the support of family, especially her husband and children.

SC McField said, “When someone chooses to become a law enforcement officer, they are committing to a lifestyle as much as they are a career. Officers and their families are conscious of the sacrifices that come with walking the thin line, and most of them enter into it knowingly. However, the same cannot be said for the children of officers, who are often born into a law enforcement family and grow up with a unique set of experiences.  Children of law enforcement officers also have to shoulder a complex set of emotions and perspectives.”

In discussing some of her fondest memories while she served, SC McField mentioned Royal Etiquette training for the visit of Her Majesty Queen Elizabeth the second in 1983 and being a part of a recruitment drive to ensure that the service was prepared for her arrival. She was also involved in the second visit of both the Queen and the late Prince Phillip, Duke of Edinburgh, in 1994.

“Being a Special Constable is not an easy job, as we volunteer and accept the risks that come along with being a Police Officer and have much the same training and full powers of Constables,” says Special Constabulary Commandant Arthur McTaggart.

“SC 573 Dr Linda McField took on that task with bravery and determination and did so for nearly 40 years, ending her service with the RCIPS Special Constabulary in April 2021. It was then that she completed her last Cayman Islands Elections Duty. On behalf of the Special Constabulary and the RCIPS we thank you for your service and thank your family for their support of the service as well.”

SC McField also spoke fondly of being able to impact the community, one person at a time, by giving a stern warning to youngsters here or there, to keep them out of trouble, or through working with the Community Policing Unit, doing work that put smiles on people's faces and helping them through hard times when they did not expect to be helped.

She also reminisced on working with other Special Constables and having such a good time that those memories were able to put a smile on her face, even in some of the darker times, during her illness. 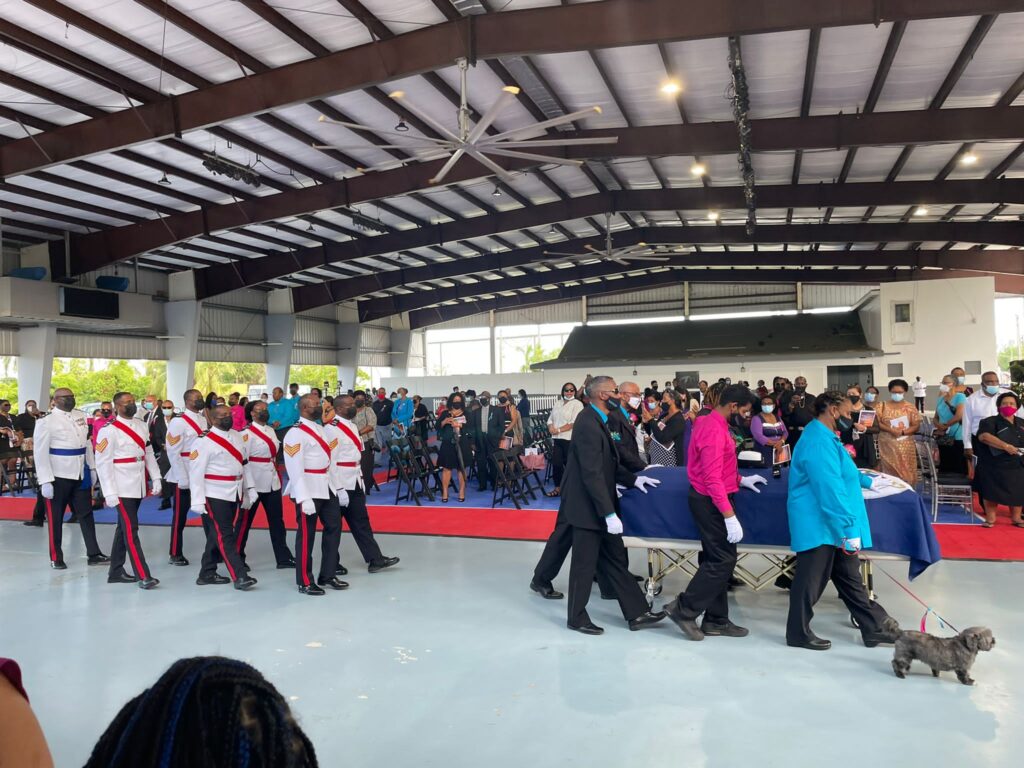 The one thing that has always been consistent with SC McField was her generosity and big heart. She not only donated her time to the service as a volunteer, but she also opened her home to families who had been affected by Domestic Violence and needed protection prior to the development and opening of the Crisis Centre. She was very passionate about efforts against domestic violence and child abuse and she encouraged others to join the Special Constabulary to bolster the efforts of the police.

Just a few weeks before her passing, she stated, “I would recommend that anyone who loves to give back to their community should contact the RCIPS Special Constabulary.  If I had to do it again, I would not hesitate for a second. To all my colleagues, who allowed me to work alongside them, and those who traveled with me to various overseas Training and Conferences, Thank You!  I also wish to express my heartfelt thanks to the members of RCIPS Special Constabulary for assisting with maintaining the order and peace of these beloved Cayman Islands. I am absolutely sure that the majority of our citizens appreciate what the police are doing. The current crime situation is challenging, but I have confidence that my colleagues will resolve these heinous crimes (serious and violent crimes), and bring closure to the grieving families.”

“SC 573 McField carried out her final duties on 14 April 2021 on the Cayman Islands Election Day. She was a treasured and valued member amongst our ranks and a joy to work with,” says DCoP Kurt Walton.

“The RCIPS and the Cayman Islands overall has benefitted from her hard work, dedication, generosity, and heart. She will be sadly missed by all her colleagues within the service, but we all take comfort in knowing that the work she's done and the standards she's set will live on.”

“On behalf of the RCIPS, I would like to extend deepest condolences to the family of the late Reverent Dr. Linda McField, SC 573. In honor of her contributions to our service, her number will be laid to rest alongside her, as a show of honor and respect for all she's contributed to this service and to the Cayman Islands. “said Commissioner of Police Derek Byrne.

(CMR) A well-known educator in the US who was one of the first students to attend Triple C School, Mark...

LIMITATION PERIODS: What you need to know