(CMR) Freddy Manuel Diaz-Christian, a former UCCI employee, has been charged with possession of and accessing child pornography after appearing in Summary Court on Tuesday, August 31 before Magistrate Hernandez. Diaz-Christian (33) is being accused of downloading at least five indecent images of underage children on two occasions. CMR sources indicate he was in charge of UCCI TV as the Marketing and Communications Coordinator.

It was revealed that the matter was brought to the attention of local authorities on January 29, 2021, after it was revealed that a particular IP address eventually linked to Diaz-Christian was used to download indecent images of children. The second download occurred in February and a search warrant was executed on his home in West Bay where the illegal material was found.

The police have also confiscated his work computers and mobiles devices and are continuing to examine those.

CMR was made aware of some allegations against him at the university in July 2021 as we investigated another employee who had been terminated for alleged financial impropriety earlier in the year. He has now been prohibited by the courts from contact with underage persons outside of his immediate family. He also cannot access the internet or any internet-related devices.

Diaz-Christian was a part-time lecturer in the Media Studies Department from 2018 and was working in the marking department until March 2021. He was teaching a videography course at the college.

He also worked for Hurley's Media and temped at GIS. He has a company called Freddy Diaz/FD Media where he did a number of commercials and shoots for local businesses.

He also briefly worked for the RCIPS: 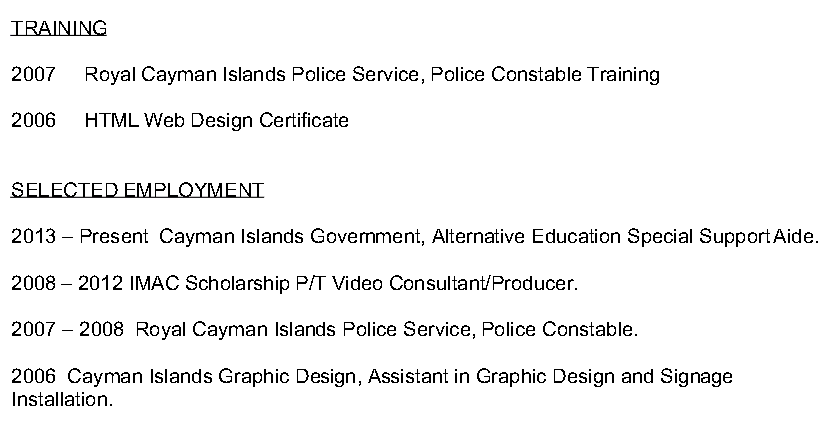 He is the second employee at UCCI that has been charged with child pornography-related charges. In 2019 Dr. Pierre Michel Pavlov Rameau pleaded guilty to 12 counts of possession of child pornography.

“The University College of the Cayman Islands (UCCI) is aware of media coverage regarding former employee Mr. Freddy Diaz and criminal charges brought against such former employee. Mr. Freddy Diaz was initially employed at UCCI in the fall of 2018 and later for a brief period (Jan-Mar) in early 2021. It is our understanding that none of the criminal charges relate to his employment at UCCI. We can confirm that in 2021, he was employed as a staff member in a non-teaching capacity. We have stringent policies and procedures in place for ensuring that our education environment remains protected at all times.”

No, thanks.
How do you feel after reading this?
Tags: Child PornographyFreddy Manuel Diaz-Christian