Richard Clough said to be retired

(CMR) The Chief Officer for the Ministry of Health and Wellness, Nellie Pouchie, is coming under public scrutiny after friends of former MRCU's Chief Pilot, Richard Clough shared that his contract was not renewed – putting the blame squarely on the administrative arm of government for the surge in mosquitos recently and non-operation of the aerial spraying program.

Cayman's mosquito population is controlled by the aerial spraying programme focusing on mosquito larvae in swampy areas and the ground crew. The June-to-December spraying season is considered the busiest for the year. Ground-level mosquito control measures include trucks applying adulticide to control adult mosquitoes (fogging) and checking various areas to recommend for aerial spraying.

However, CMR has been further informed that three months before his contract expired he reached out to his superiors in the ministry and received no response from them. Therefore, when his contract expired he simply did not return to work. Many people have indicated they do not blame Clough for what appears to be a lack of respect towards him after 32 years with the MRCU. 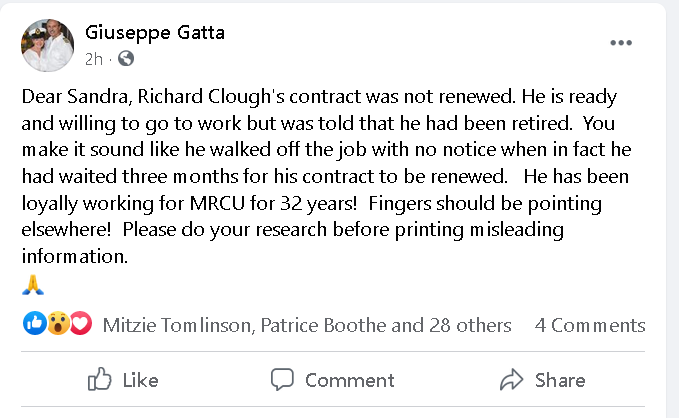 Additionally, others have shared that despite Clough's lengthy tenure with the MRCU the aerial unit has a reputation for flying below the recommended label instructions for the pesticides being used. This they claimed is potentially putting the lives of the residents in Cayman at risk. One person observed that the manufacturers have tested the pesticides safe when sprayed from a particular height (150 feet) and any divergence from those specific instructions should never be permitted because it impacts the saturation level of the formula.

Clough was a former military pilot before coming to the Cayman Islands.

There's no indication as to why Clough was not contacted about an extension on his contract and based on the posts from his friends he was told it was merely “retirement”. For clarity, he simply did not return after his contract expired.

The lack of a continuity plan after Clough's departure has raised concerns about the ministry's handling of the situation leaving most to wonder what succession planning is in place. CMR understands that several Caymanain pilots are currently in the United States receiving the required training and flight hours to come back and fill the position. However, the ministry could have engaged contract pilots to assist with the temporary shortage but they are not available until a few weeks' time.

It is still not understand why the MRCU's aerial unit falls under the responsibilty of the chief officer and not the director of the MRCU.

Back in 2005 there was a period when the aerial team was non-operation as well because Clough's plane skidded off the runway at the Owen Roberts International Airport (ORIA). Clough was injuired but the plane had to be replaced. The second plane was inoperable after being damaged by sea water from the North Sound that flooded the ORIA runway during Hurricane Ivan.

At the time there was also a delay of the arrival of the two Ayres Turbo Thrush aircrafts by several months due to unforeseen issues with the manufacturer and the US Federal Aviation Administration.

Each plane cost the government around US$1 million and were manufactured by Canadian company Pratt & Whitney. They are custom designed with software used for mosquito-control purposes. it incorporates real-time weather information that automatically adjusts the flow of adulticide dispersed during flights. Clough along with engineer Steve Chamberlain and assistant engineer Robert Powell attended training in Montreal, Canada on engine repair and maintenance.

The Chief Officer and acting Head of the Civil Service have both been contacted for comment on what transpired in this situation.

No, thanks.
How do you feel after reading this?
Tags: Mosquito Research and Control Unit (MRCU)Richard Clough

(CMR) The Ministry of Border Control and Labour, on behalf of the Department of Labour & Pensions (DLP) has announced...

(CMR) Deputy Premier Chris Saunders has described Cayman's current migrant situation as a crisis and has indicated that the cost...