(CMR) The Cayman Islands Government Department of Environment has advertised two jobs online in what critics say is a deliberate desire to recruit overseas candidates instead of Caymanians. The positions were posted on their Facebook page and are being advertised in British pounds. It also that the job is “based in the Cayman Islands for just under three years”.

CMR under some investigations into the matter and realized there is much more to the job adverts that meet the eye.

The advertisements have caught the keen eye of many in the Cayman Islands including those who are unemployed during the pandemic. They are left wondering why any government agency is tailoring job advertisements to overseas candidates, especially during the current pandemic. Two positions being recruited for are Biosecurity Officer and Community Engagement Officer – both located in the Cayman Islands. 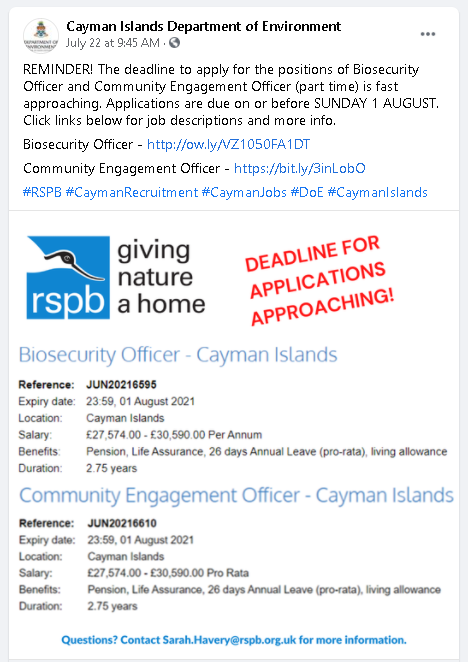 The URL in the social media posting links to a UK website and careers page that reads in part:

“Do you want to help protect some of the most threatened reptiles on the planet and safeguard unique pockets of paradise? Keen to mentor and build the capacity of others? Are you already, or would you be happy to be, based in the Cayman Islands for just under three years? If so, this could be the job for you.”

However, others have pointed out that these are not positions being funded by the Cayman Islands Government but instead are part of the Darwin Plus Initiative which is a UK government grants scheme that funds projects that aim to protect the unique biodiversity and improve resilience to climate change within the UK Overseas Territories. The Department of Environment is simply a project partner.

Heriot-Watt scientists will spend the next two years researching Cayman deeper water. UK Marine scientists from the Heriot-Watt's Institute of Life and Earth Sciences (ILES) and Marine Conservational International with work with partners from DoE and non-profit organization Beneath the Waves.

The scientists were successful in applying for the UK government funding via the Darwin Initiative which will focus on the assessment and conservation of the Cayman Islands deep-water reefs and fishes in the amount of £207,681.00. The lead organization is Heriot-Watt University and the project aims to study marine life below 50m. Heriot-Watt is a leading UK university with campuses in Malaysia and Dubai. It ranked 9th among UK universities in the most recent Research Excellence Framework (REF) review.

The project will undertake surveys of Cayman seabed habitats down to 2000m with a focus on threatened and commercial fish species, including sharks. It will also map the distribution of deep-water coral and other biotopes with a view to designing additional protected areas.

Professor Mauvis Gore is the project leader and applied for the funding. She is listed online as the Co-Director of Marine Conservation International (MCI) and an Honorary Associate Professor at Heriot-Watt University. She also teaches at Edinburgh University is a former Senior Research Fellow at the University of London’s Marine Biological Station Millport, and former Director of Animal Conservation and Research with the Royal Zoological Society of Scotland. Mauvis obtained her Ph.D. from the University of West Indies, where she studied reef fishes and was involved in establishing a marine park.

She has partnered with the DoE previously on shart conversation.

Professor Teresa Fernandes, head of ILES, said: “The Cayman Islands lie next to a deep ocean trench, but relatively little is known of its marine life below 50 meters. We will find out which fish and invertebrates are down there, their food sources, their habitats, how they are all connected and whether these habitats have been damaged.”

Tim Austin, deputy director of the DOE said: “Our findings will be important for the Cayman Islands Government, but also for the Caribbean region as a whole.”

No, thanks.
How do you feel after reading this?
Tags: Darwin Plus InitiativeDepartment of EnvironmentMauvis Gore

(CMR) Cayman's annual lobster season, which runs from December to February 28, starts today. However, people are being reminded that...

Department of Environment trying to locate shark in distress

(CMR) The Department of Environment is trying to locate a Nurse shark believed to be in distress after it became...

(CMR) Blue Iguana Conservation (BIC), managed by the National Trust for the Cayman Islands  (NTCI), has launched a mobile app...

(CMR) The Department of Environment has confirmed that a video of seine net fishing, posted by CMR, was taken in...

(CMR) The National Trust for the Cayman Islands has purchased a new parcel of primary Mastic forest to add to...