Sends case back to Grand Court for reconsideration

(CMR) The Privy Council delivered a decision on Monday involving the Royal Cayman Islands Police Association v the Commissioner of the RCIPS and others where it found that the police's re-engagement policy was irrational despite its positive intent. The court was charged with considering a number of issues including the constitutional rights of the police officers. It partially found in their favor and send the matter back to the grand court for reconsideration.

Between November 2010 and September 2016 there were different mandatory retirement ages for police officers in the RCIPS which applied to non-gazetted officers. The age changed from 55 to 60 for those appointed after November 22, 2010. However, many officers would be re-engaged after being subjected to mandatory retirement. They would be re-engaged at the rank of constable regardless of the rank they had attained or the needs of the police service.

Representing the officer the RCIPS Association along with 10 police or former police officers sued the CoP and the Attorney General of the Cayman Islands claiming that they had been discriminated against on the basis of age because of the forced retirement at age 55. Since there is no specific legislation that deals with age discrimination they brought their case under section 16 of the Cayman Islands Constitution; which is equivalent to articles 14 and 8 of the European Convention on Human Rights (“ECHR”).

The officers claimed that that mandatory retirement on the grounds of age came within the ambit of section 9 (The Caymanian equivalent to article 8 ECHR). This would amount to unjustified discrimination if it could be proven.

The officers also claimed that the RCIPS's re-engagement policy was in breach of section 19(1) of the Constitution which provides that “all decision and acts of public officials must be lawful, rational, proportionate and procedurally fair.” They argued that the policy which only allowed them to be re-engaged at the rank of constable with no discretion for taking into account their qualities or the needs of the police service was not rational.

In March 2018, Acting Judge Hall of the Grand Court found that the imposition of a mandatory retirement age did not fall within the ambit of section 9 of the Constitution. She dismissed the claims relating to re-engagement on the basis that it was subject to exceptions and not a blanket policy. She also found that several officers should not have been allowed to be part of the lawsuit because they had not applied to be re-engaged; their claims were dismissed.

The CI Court of Appeal gave a judgment on February 6, 2019 which it held that the police officers had no remedy under section 16 of the Constitution because their claims fell outside the ambit of section 9 and the prohibition against age discrimination did not apply. That court did find that there was discrimination based on the compulsory retirement at age 55 vs. those later allowed to retired at 60 and held that was not justified.

The two lower courts came to the same conclusion regarding the rationality of the re-engagement policy despite arriving there in different ways – dismissing those claims. The Privy Council was charged with considering the following issues: 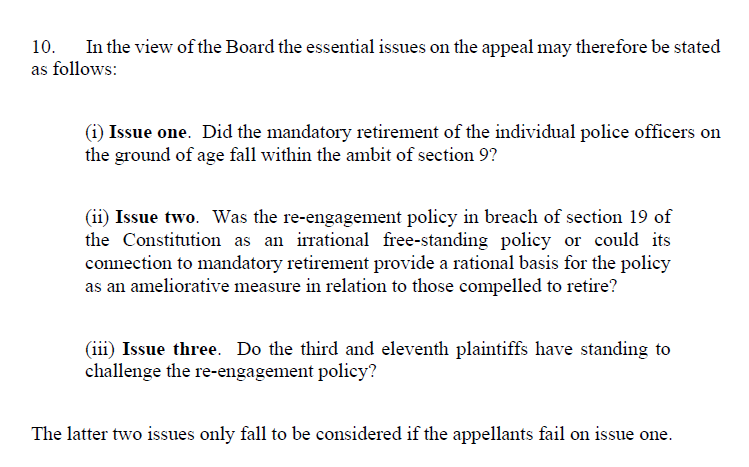 The council dismissed the appeal in relation to issue one but allowed the appeal on issues two and three. On submission one, It agreed with the Court of Appeal that compulsory retirement was not akin to dismissal on the grounds of gender. It noted that article 8 (by extension 9) had not been engaged and that section 16 of the Constitution has no application.

“However, the value judgment of the Board is that mandatory retirement on the grounds of age, which is an ordinary incident of modern life, is far removed from the core values in relation to employment-related disputes between an individual and a State which article 8 (and section 9) are intended to protect so that in relation to such disputes it not only does not fall within the reason-based approach to the application of article 8 but also does not fall within the ambit of that article.”

It went on to find that the re-engagement policy was irrational agreeing with the position the Court of Appeal took.

Those six officers having a claim under the re-engagement policy had their matter remitted back to the Grand Court for reconsideration and all parties are allowed to call further evidence upon returning to the Grand Court.

It also found that the two officers who were not allowed to be part of the proceeding did have the legal right (standing) to make a claim.

(CMR) A man has filed a lawsuit against attorney Anthony Akiwumi after he allegedly borrowed $80,000 from him but neglected...