“Our only hope in fighting this virus is to get vaccinated. Those of us who have gotten the jab will stand a much better chance of survival than those who have not. I want you to stop reading nonsense on social media, stop listening to stupid people spreading propaganda that have no medical knowledge. GO AND GET VACCINATED.”

(CMR) Local home improvement retailer, A.L. Thompson's, has become the latest organization in the Cayman Islands to require mandatory vaccination for all eligible employees. In an internal memo, President Al Thompson expresses frustration at people outright refusing to get vaccinated for a disease “where death could be the final outcome.”

He notes that as of Monday employees are required to provide evidence of vaccination or a doctor's letter stating why they should not be vaccinated. He states that he wants no excuses but just “want this done.” In order to incentivize employees further, he noted that the company's voluntary bonus payouts for the ned of June have been postponed by a week until all results of “what staff have been or not been vaccinated.”

Speaking exclusively to CMR Thompson shared that no decision has been made regarding the future payout of bonuses.

He thanks his staff for their hard work and ends with “I know we can count on everyone to cooperate.

In late May 2020, they had at least two confirmed positive cases at the island's largest hardware retailer. At that time, they implemented numerous COVID-19 safety protocols including mandatory PCR testing. They were closed for about five days due to the infection. His organization at the time employed close to 200 people.

Last month CMR reported that the Health Services Authority has decided to make vaccination mandatory at the time of contract renewal or signing for its employees. It explained that as frontline workers they had a particular obligation to protect patients from the virus. That message was also distributed via an internal memo to all employees.

This hardline comes after a fringe anti-vaccination meeting hosted by Katina Anglin was held at the George Town Town Hall on Saturday evening. CMR understands that she collected money “much like a church sermon” as she vowed to fight the COVID vaccination and take legal action if necessary. Stating that this was “an educational seminar” aimed at informing people on their “patient rights, informed consent, and the legal position on medical treatments.” 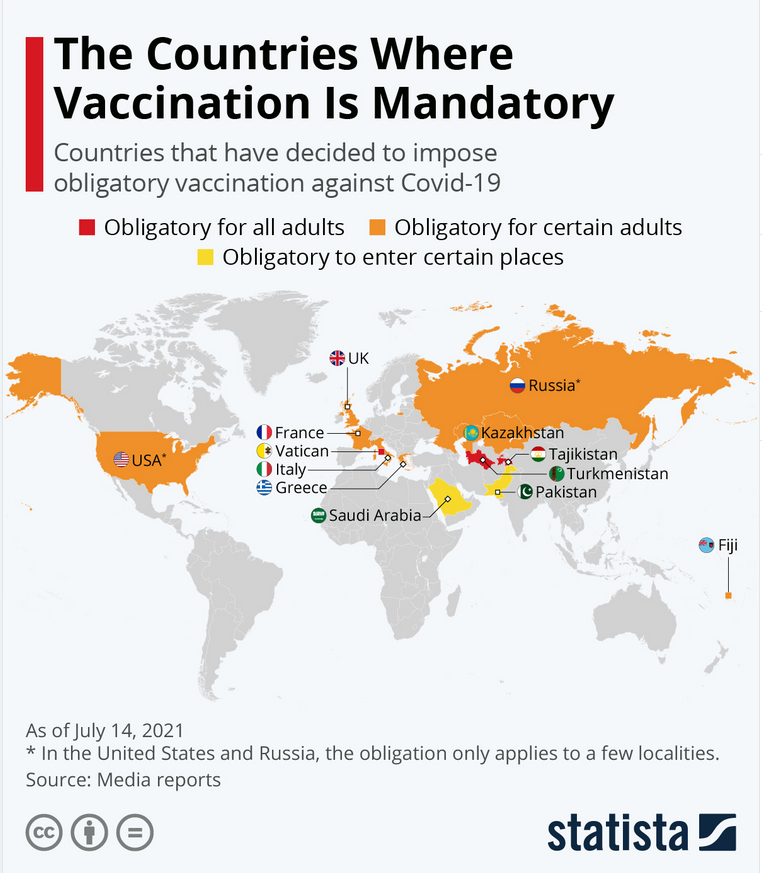 In San Francisco, California it was announced that all 35,000 city employees would have to get the jab. Zimbabwe has followed suit for all civil servants.

In France and Israel, people must be vaccinated to enter public buildings.

Mandatory vaccinations have been used during other times in history including when the United States was fighting the smallpox vaccination in the 19th century. The Supreme Court ruled in 1905 that doing so was constitutional.

Several days ago a US federal judge rejected a request from students to block Indiana University's vaccine mandate. Students who refuse to vaccinate cannot attend classes.

In the Cayman Islands, the PACT government has so far indicated that it is seeking legal advice and contemplating making vaccination mandatory for work permit holders. The Human Rights Commission has already given the government its blessings to mandate vaccines with proper safeguards in place.

No, thanks.
How do you feel after reading this?
Tags: A.L. Thompson'smandatory vaccination