by CMR
in Tourism
0

(CMR) The United Kingdom's Department of Transport continues to tweak its red, amber and green list rules for entering England. Notably, the Cayman Islands is in danger of losing its current green light status according to the latest update from Wednesday. Cayman is now on the “green watchlist” with a notation that states “at risk of moving from green to amber.” 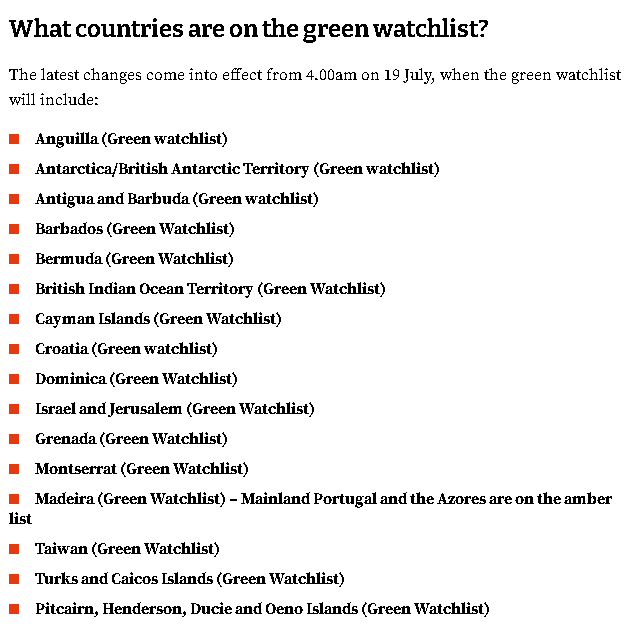 The green watchlist list is there to give travelers more guidance as to which destinations are at risk of moving from green to amber. Cayman's latest move could be attributed to the fact that our vaccination levels have dropped off in recent weeks.

Other Caribbean countries on the green watchlist include Anguilla, Antigua and Barbuda, Barbados, Bermuda, Grenada and the Turks and Caicos Islands. Neighboring Jamaica remains on the amber list. The British Virgin Islands will be moved from the green list to the amber list along with the Balearic Islands.  Cuba is moving to the red list on Monday, July 19 at 4:00 a.m.

Bulgaria and Hong Kong were added to the green list.

Local officials were unaware of the possible pending status change back to the amber list but the list is reviewed every three weeks with the possibility of urgent changes made in between if necessary.

No, thanks.
How do you feel after reading this?
Tags: UK travel restrictions

(CMR) The Cayman Island's Department of Tourism's (CIDOT) Regional Manager for the UK and Europe, Adrian White (Ado), is facing an...

AA plane to Cayman grounded with passengers for hours

(CMR) Passengers on an American Airlines flight from Miami to Grand Cayman said they spent hours stuck inside the plane...

(CMR) Cayman Airways Limited (CAL) will be standardizing its various baggage fee charges for the first two checked bags on...