(CMR) Dr. Linford Pierson, former Cabinet Minister in The Cayman Islands, will be among three persons who will receive honorary degrees from Northern Caribbean University (NCU) in Jamaica at its virtual graduation exercise to be held on 8 August 2021.

Dr. Linford Pierson will be conferred with the degree of Doctor of Public Service (Honoris Causa). Dr. Pierson, who was the commencement speaker at NCU in 2020, has served as a director on several public/private sector boards, including the University College of the Cayman Islands as well as NCU. He is an alumnus of West Indies College, the forerunner of Northern Caribbean University.

Dr. Pierson has a Master's degree in Pastoral Psychology and Counselling and a PhD in Educational Psychology. He is a Fellow of the Association of Chartered Certified Accountants. After serving for 16 years in the Cayman Islands Civil Service, he held political office for a further 16 plus years, including as a Minister of Cabinet and Speaker of the Legislative Assembly. 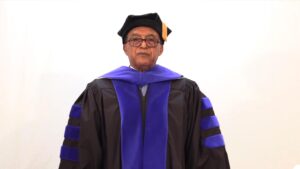 The Cayman Islands Government named the “Linford Pierson Highway” after him and bestowed on him the honorific “the Honourable”. He worked in various management positions in the private sector. He is a Past President and Past Assistant District Governor of Rotary District 7020.

Ellington, who will deliver the keynote address at one of two commencement ceremonies on 8 August, is to be conferred with the degree of Doctor of Liberal Arts (Honoris Causa) in recognition of her outstanding work in theatre media and culture.

Tourism businessman Andrew “Andy” Ingraham will be conferred with the degree of Doctor of Business (Honoris Causa). He will also be the keynote speaker at the first of two commencement services.

No, thanks.
How do you feel after reading this?
Tags: Dr. Linford Pierson